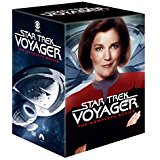 Star Trek Voyager was the third spinoff from the original Star Trek, following the superior Next Generation and the inferior Deep Space Nine. While the idea was quite an original premise, the cast never seemed to gel. The obvious attempt at political correctness gives us the most diverse cast yet on Star Trek, including the first female captain. Kate Mulgrew is the weakest captain to date on Star Trek. (I know I’ll catch heat for this.) The reason is not her gender, but such a lack of strength. She never walks, but seems to glide across the bridge when she moves. The strongest characters come in Tom Paris, the Federation inmate, and Torres, the half-Klingon, half-human hybrid. There is real passion in those characters that keeps the cast interesting enough. The combination of Federation and Maquis (a rebel Federation group) members was a great setup that too quickly gets tossed aside in later years. There’s plenty of Star Trek eye candy and a whole new quadrant of aliens to meet here. It had been quite some time for me since I had seen Voyager.

Star Trek Voyager came into its own during the second season. This was the first full season of the Star Trek spin-off. Voyager once again brought the concept of exploration to the Star Trek universe. The season was very uneven. There is the absolutely terrible and contrived episode The 37’s, which starts off with an old pickup truck floating in space. For the first time a starship lands, and I think that was an unwise development. This is the episode where the crew finds Amelia Earhart. The season does contain one of the best episodes of the series with Tuvix. Remember Tuvok and Neelix getting genetically entwined with an orchid? The combined character was far more interesting than either was individually. I recall wishing they stayed combined. It wasn’t always great stuff, but it was Star Trek at a time when The Next Generation was ending. This was a solid season for Voyager. The show had not yet settled into its too-comfortable environment. The season ended on the usual Trek cliffhanger. It must be noted that since the series began the previous January instead of the customary fall, production of episodes for the first three years does not follow the seasons. If you check out any of the Voyager companions available, you will find discrepancies as to which episodes came from which season. More episodes were produced in years 1 and 2 than were aired. These unaired episodes would begin the following season.

Season 3 of Voyager was the most exciting so far. This is the year Q, one of Star Trek’s most beloved characters, adds Janeway to his list of captains to pester. The powerful Borg would also enter Voyager’s universe in Season 3. The year would end with a cliffhanger that also introduces Seven of Nine to the cast. This was also Kes’s final year. There’s no question that the show’s dynamics went from stun to kill. Episodes became a bit more standalone. The long-overdone Kazon arc would be abandoned for more compelling drama. George Takei appeared in a Voyager/Star Trek VI crossover episode that puts Tuvok on Sulu’s ship during the events of the final original cast film.

Season 4 of Voyager is most notable for the addition of Jeri Ryan’s Seven of Nine as a regular character. The stories grew a bit more complex. The season appears to have regarded style above substance. There is a modest attempt to develop a mother/daughter  kind of relationship between Seven of Nine and Janeway. The problem is that, like the potential for conflict inherent with the addition of the Maquis members of the crew, this conflict is all to often resolved in a Brady Bunch “What have you learned from this, Seven of Nine” formula. No question the Borg and Species 8472 offer a better group of adversaries than the Kazon were ever capable of. I judge this season to be one of bright moments and missed opportunities. With the addition of Seven Of Nine it is important to mention the loss of Kes. I think the show runners boxed themselves in from the start with Kes. Her rapid growth and maturation led to many of the show’s nit-picks and continuity errors. When the crew expanded, she was the logical choice to exit.

Things were pretty much over the peak when Voyager warped into Season 5. The Seven of Nine tension was beginning to feel played out by now. The prominence of the girl Naomi I found to be a bit irritating. This would also be a year of rebellion as quite a few crew members cause Janeway more than her fair share of grief. The Borg continue to be the master villains and account for the bright spots in an otherwise mediocre season. Season 5 does bring us to that magical 100th episode with Timeless.  Dark Frontier would become the first Trek episode ever presented as a “Star Trek TV film” Yes, there were many 2-parters, but Dark Frontier was not filmed or broadcast as a 2-parter. Season 5 can best be summed up with one word: stability. This was the first year where no real changes occurred.

Season 6 signaled the inevitable decline of Star Trek Voyager. While there were certainly strong episodes, such as Pathfinder, there were far too many episodes like The Spirit Folk. The addition of the Borg children was, perhaps, the final push into the abyss. They are constantly irritating. It’s like a pack of Wesley Crushers without the passion. Voyager may have been struggling to get back to the Alpha Quadrant, but it was clear the writers were struggling even harder to keep the show fresh without resorting to overt cuteness or rehashing tired ideas. By now you would think Janeway would have turned off that dangerous holodeck.

In Season 7. Voyager returns home, and like Deep Space Nine and The Next Generation, the third Star Trek spinoff wraps up. The final episode Endgame is not as dramatic as the finales for the other shows. I guess it becomes anticlimactic when you have known for seven years how this was going to end. The f/x are some of the best in Trek TV history, however. This is truly a visually stunning episode. The season is about on par with Season 6. Stories continue to grow stale. Even the Seven of Nine story arc has pretty much run its course by now. Attempts to spice up the character with a romance fell horribly short.

Voyager launched to a pretty solid start. Most fans agree that the show’s middle years were a struggle of no identity. Season 1 was a year of infinite possibilities. I liked the cast better before they settled in and became too comfortable. Later Seven of Nine would offer a lot of the inner conflict that should have been mined from the Federation/Maquis convergence. Kes had been gone so long I had surprisingly very little memory of her. Voyager appears to be the most overlooked sibling in the Trek family. It is about as close to Roddenberry’s creation as Rick Berman has gotten. There was tremendous potential and some very sharp and memorable episodes to be found in the series. The entire series is now all in one set complete with all of the DVD extras from the earlier season sets. My only complaint is the packaging. CBS continues to use these fragile overlapping large cases. It’s just not possible for you to keep the discs in place, and they will suffer damage. But it’s a chance to relive the show from the first episode to the final fade-out at a reasonable price point.  “Let’s get started then.”

Gino Sassani is a member of the Southeastern Film Critic's Association (SEFCA). He is a film and television critic based in Tampa, Florida. He's also the Senior Editor here at Upcomingdiscs. Gino started reviewing films in the early 1990's as a segment of his local television show Focus. He's an award-winning recording artist for Omega Records. Gino is currently working on his 8th album Merchants & Mercenaries. Gino took over Upcomingdiscs Dec 1, 2008. He works out of a home theater he calls The Reel World. Favorite films: The Godfather, The Godfather Part II, The Body Snatcher (Val Lewton film with Karloff and Lugosi, not the pod people film), Unforgiven, Gladiator, The Lion King, Jaws, Son Of Frankenstein, The Good, The Bad And The Ugly, and Monsters, Inc.
Slasher.com Kong: Skull Island