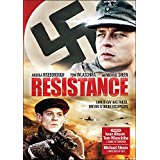 Resistance was first released in the UK in 2011, and it saw its first DVD release two years ago in Finland. Now in 2017, the US is finally getting DVD distribution. However, like most distribution marketing strategies, the cover, DVD home screen, and advertised star power are an inaccurate depiction of what the film actually offers. While the film has many strengths, all the imagery that you get prior to actually watching the film (the cover and home screen), prepare you for what you think is going to be an interesting WWII-themed thriller with possible action sequences. Instead, Resistance is an interesting, yet severely slow-paced character study that doesn’t necessarily follow its own plot description.

The film claims to be about a small community of wives in a Welsh valley whose husbands mysteriously disappear one morning. The film implies that they have left to join the allied resistance against Germany, but realistically, that is a huge MacGuffin. There is also an interesting subplot involving an inexperienced Allied assassin that also is rather underwhelming, but realistically, that is the point. The film is actually about the internal and external struggles faced by Captain Albrecht (Tom Wlaschiha) as he must balance the morale of his men, the superiority over the women in the community, and his own personal philosophies regarding the war.

The film’s strongest suit is the wonderful cast. At first, I was lured into the film with the promise of Michael Sheen (Underworld, Frost/Nixon), but he has a rather minor part in the story. He had an interesting role, yes, but there wasn’t much I could have been impressed by. While I was disappointed with his lack of screen time, Tom Wlaschiha was a surprisingly wonderful male lead. The most impressive thing about his acting is the way he can appear threatening in a non-verbal way. For example, when disciplining one of his subordinates for spying on a woman, he simply asks “do you have a sister?” and stares at the soldier until he leaves. It is true that his character is written this way; however, Wlaschiha’s cold stare sent me as many chills as the soldier probably received. Basically, I wasn’t expecting to be impressed by Wlaschiha, but he made the film fun to watch.

On the other hand, the entirety of the story is interesting, but the subplot of the film felt as if it didn’t fit. Michael Sheen plays a key player in the resistance of the Gestapo, and he has trained a young boy of the village (Iwan Rheon) to be an assassin. This subplot is introduced to the film at the beginning, so you are under the direct impression that this amateur assassin is going to be the main story of the film. Instead, he just sort of disappears after ten minutes or so. By the time you realize he isn’t going to be the main character, another twenty minutes of the movie have gone by, and you essentially miss some crucial plot points in your anticipation. In all honesty, the film would have been much better if it omitted that subplot, simply because it serves as a distraction from the great parts of the film. Yes, the subplot does tie in thematically to the concept of “resistance,” but in a way that is unnecessary; Captain Albrecht’s implicit contemplations about what it means to resist or to be part of a resistance is where you can find the strong writing. Anything more than that, it begins to “beat you over the head” with its message, which in turn becomes detrimental to the enjoyment of the film.

It is a very smart drama set during WWII, so don’t let the cover fool you. There are no intense action sequences involving Nazis, no dogfights, and no thrilling assassination attempts. It is a slow-paced art film that really knows how to capture the beauty of Wales. Almost every shot in the film takes in the beautiful valleys and the natural wonders that accompany them. The film also uses the dense fog in certain areas to add to the ambiguity of the concept of “resistance” within the film. Overall, it is a very intellectual art film that questions and challenges what it means to resist varying levels of superiors.