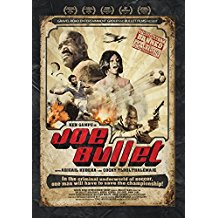 When it comes to exploitation films you really are rolling the dice when you find a title you’ve never heard of and you decide to watch it. Through the 60’s and 70’s there were countless exploitation films that covered many genres, many of which were sold to audiences by a cool-looking poster and catchy title.  Sex and violence were the major exploits with these films, and at this time there was also the birth of black cinema, or simply blacksploitation films.  Many have heard of Foxy Brown, The Mack, and Truck Turner, but for all these hits there were many more misses, and it’s the lost gems of the era that film geeks get excited over.  Just because a film wasn’t a hit at the time didn’t mean the film was no good; many just fell between the cracks, and Joe Bullet just happens to be one of those titles.

Joe Bullet is about as exploitation as it comes.  If you are looking for something on par with the quality of the recent Jason Bourne film, well, you better keep on looking.  This is one of the examples of low-budget filmmaking at its finest, where having a car explode most likely was a big chunk of the budget.  I know some people can’t appreciate the camp of these films and quickly dismiss them, but for me I feel there is a bit of charm that comes through because you can see that everyone involved is actually trying to make the best film they can within their financial means.

The story is relatively simple. The Eagles are a soccer team that seem to be the favored team to win an upcoming championship but there is a local gangster that has other plans.  The unknown gangster sends his goons out to hurt and attempt to kidnap members of the team, and this is when Joe Bullet (Ken Gampu) is called in to help protect the team.  But just who is Joe Bullet? Well, he’s just about the coolest, the toughest, fighter and lover around.  He’s so awesome he even has a theme song that plays again and again through the film with lyrics that remind us just how awesome he is.

Once Joe begins to protect the team, it’s not long after that assassins now have their sights aimed on Joe, and he is placed in constant peril. As the film progresses, it’s revealed that Joe happens to be a martial arts master. Please don’t let this get your hopes up for some Bruce-Lee-style action.  Instead the fight scenes are, well, dare I say kind of adorable with how clumsy they are.  I can’t but grin when I see him deliver chops to the throat that incapacitate his foes.  As the film progresses, the fight scenes manage to get sillier.

These films you just can’t take seriously. They are what you watch when you’ve had a few drinks and you just want to have a good time.  Heck, make a drinking game out of it, like take a shot every moment there is a shot of someone’s feet as they enter a scene.  Seriously, I’m talking foot-fetish cinematography that will have you convinced this could be a Tarantino film (OK, maybe not that good, but hopefully you get the point).  Yeah, there are editing issues, and sometimes the sound doesn’t seem properly synched, but that’s how all these films were from this era.

Is Joe able to protect the team long enough to make it to the championship game?  I don’t expect you to be on the edge of your seat, chomping on your nails, riddled with anxiety with this title. But if you are looking for something that’s a little different, the kind of film that doesn’t take itself all too seriously, Joe Bullet is the kind of guilty pleasure you can’t help but appreciate.

Brent Lorentson is a horror writer and film critic based out of Tampa, Florida. With a BA in Digital Film, he co-wrote and co-directed Scavenger Hunt. His short stories have appeared in various horror anthologies. In 2019 his short script Fertile Blood will be a part of the anthology horror film Slumber Party. He is currently working on his first novel A Dark and Secret Place set to be released in late 2019. Favorite Films: Taxi Driver, Fight Club, I Saw the Devil, The Wild Bunch, Dawn of the Dead, A Clockwork Orange, Pulp Fiction, Heathers, The Monster Squad, and High Fidelity.
Resistance 100 Streets (Blu-ray)