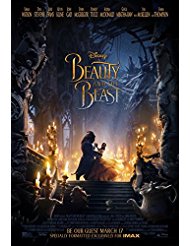 “Who could ever learn to love a beast?”

Although it’s not quite a tale as old as time, people around the world have been enchanted by the story of “Beauty and the Beast” for centuries. The French fairytale was first published in 1740 and has subsequently spawned everything from a classic 1946 big-screen romance to Ron Perlman. Still, the most popular iteration of this story is Disney’s beloved 1991 animated musical, which helped solidify the Mouse House’s cartoon revival and serves as the most direct inspiration for this dazzling live-action adaptation. Then again, the fact that this new version is essentially a pretty close copy of a copy takes some of the bloom off this particular rose.

I just spent a whole paragraph talking about how everyone knows and/or loves “Beauty and the Beast”, so I’ll try to keep this synopsis short. Belle (Emma Watson) is a beautiful and kind-hearted bookworm who lives with her eccentric inventor father Maurice (Kevin Kline) and repeatedly has to fend off unwanted advances from egotistical hunk Gaston (Luke Evans). During a trip to sell some of his music boxes, Maurice loses his way and is attacked by a pack of wolves, forcing him to seek shelter in a mysterious castle. Unbeknownst to him, the castle is occupied by a ferocious Beast (Dan Stevens) and his enchanted servants, which include a candelabra named Lumiere (Ewan McGregor), a mantel clock called Cogsworth (Ian McKellen), and a teapot named, um, Mrs. Potts (Emma Thompson).

This version of Beauty and the Beast clocks in at 130 minutes, which is about 20 minutes longer than its cartoon inspiration. (Which became the first animated film to earn a Best Picture Oscar nomination.) The new film opens with a quick, effective prologue that introduces us to The Beast when he was still a vain prince and depicts the events that caused him and the castle’s inhabitants to be cursed. Other than that, I found that the new additions were either underwhelming (what’s the point of creating a new character for the great Stanley Tucci — a harpsichord named Cadenza — if you’re not going to give him a single thing to do?) or slowed the story’s momentum (the repeated allusions and flashbacks to Belle’s late mother).

Director Bill Condon already has a movie musical (Dreamgirls) under his belt and a couple of the numbers do stand out here. I like the way that “Gaston” has been blown out into a foot-stomping spectacle — Josh Gad was born to play LeFou, Gaston’s suck-up sidekick (more on him later) — and “Be Our Guest” leans hard into the Esther Williams musical aesthetic. The movie also incorporates songs from the Broadway version of “Beauty and the Beast.”  Condon brings a majestic, painterly touch to Beauty and the Beast. It’s most clearly there whenever the movie ventures inside the Beast’s grand castle, but it’s also apparent during the musical introduction of “Belle.”

“Beauty is found within.”

While the production values here are unassailably top-shelf, the slickness of some of the visual effects might occasionally pull you out of the story in a way hand-drawn animation does not. Disney has hit the jackpot in recent years with these live-action remakes of its own cartoon classics. But Cinderella leaned more heavily on bold costumes and real-life locations than CGI, while The Jungle Book went all-in on its CGI setting and animal cast out of necessity. For all its dazzle, Beauty and the Beast often hovers somewhere in between.

Fortunately, the charming, all-star cast helps the viewer stay connected. Watson became a star playing the brave and brainy Hermione Granger in the Harry Potter series, so casting her as Disney’s most famous book nerd makes perfect sense. She makes for a strong heroine, even if her thin, over-produced singing voice leaves something to be desired. It’s hard to say how much of Stevens is in his performance as Beast (which is a blend of CGI and motion-capture puppeteering), but I like that this character was somewhat beefed up: not only does Beast have to soften and overcome his vanity to be worthy of Belle’s love, but he has to learn how to genuinely love others himself. Among the wildly overqualified supporting players, McGregor’s amorous Lumiere and McKellen’s fussy Cogsworth make for a solid comedy team. Thompson, however, was oddly underutilized considering that Mrs. Potts is such a key, maternal presence for Belle.

I was delighted to see Kline get a decent amount of screen time as Belle’s dad, whose role is considerably beefed up compared to the cartoon. Evans has an absolute blast playing the pompous Gaston, who starts off as a well-meaning doofus before revealing his (inner) ugly side. You’re probably aware of the furor over Disney revealing that this version of Beauty and the Beast would include its first openly gay character, which has caused the film’s release to be postponed in Malaysia. If you haven’t heard about this…then ignore the previous sentence because it’s much ado about nothing. Yes, LeFou is a bit more outward with his affection for Gaston (instead of a “man crush” it’s more of a “crush crush”), but the “gay content” here isn’t any more overt than anything kids have already seen in a Bugs Bunny cartoon.

But with apologies to all our Malaysian readers, none of it matters because — despite not quite casting the same spell as its predecessor — this Beauty is nevertheless going to be a Beast at the box office