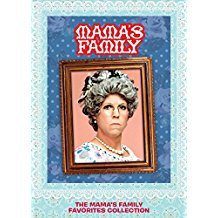 How long has it been since you’ve spent some time with Mama? It’s hard to believe that it’s been over 25 years. Our good friends at Time Life have decided that it’s just been too dang long. Of course, we’re talking about the television classic Mama’s Family staring Vicki Lawrence. We’re teaming up to give you a good deal of time to spend with Mama. It’s called Mama’s Favorites and it’s a collection of 6 DVD’s. There’s one from each season featuring Vicki Lawrence’s hand-picked favorite episodes. You get 37 episodes in all. Guest stars include Carol Burnett, Harvey Korman and Alex Trebek.

Gino Sassani is a member of the Southeastern Film Critic's Association (SEFCA). He is a film and television critic based in Tampa, Florida. He's also the Senior Editor here at Upcomingdiscs. Gino started reviewing films in the early 1990's as a segment of his local television show Focus. He's an award-winning recording artist for Omega Records. Gino is currently working on his 8th album Merchants & Mercenaries. Gino took over Upcomingdiscs Dec 1, 2008. He works out of a home theater he calls The Reel World. Favorite films: The Godfather, The Godfather Part II, The Body Snatcher (Val Lewton film with Karloff and Lugosi, not the pod people film), Unforgiven, Gladiator, The Lion King, Jaws, Son Of Frankenstein, The Good, The Bad And The Ugly, and Monsters, Inc.
Moana (Blu-ray) Beauty and the Beast (2017)