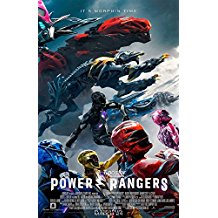 Well, to steal the most popular catch phrase of the television series: “It’s Morphin Time!” That’s right, folks; the Mighty Morphin Power Rangers are once again coming to the silver screen.  Personally, after experiencing several remakes as well as more television reboots than I can even count, I found myself highly skeptical about this undertaking. Childhood nostalgia is the only thing that motivated me to see this movie, and even then I went into the screening expecting a cheesy and cliché film that was going to tarnish the memory of the show that I once loved. I am proud to say that I have never been so wrong.  Not only was this action movie great, it is going into the top five of movies that I have seen this year.

Millennia ago, Zordon (Bryan Cranston), leader of the Power Rangers, finds himself betrayed by a member of his team, Rita (Elizabeth Banks), who has become corrupted and seeks the Zeo Crystal, a crystal with the power to create and destroy worlds, for herself. Unable to stop her and his team destroyed, Zordon gives his life to prevent the destruction of mankind and defeat Rita temporarily. Before his death, he locks away the power coins, which gave him and his fellow Rangers their power until the next generation of worthy warriors can be found to finish what he started.

Fast forward to 2017, Jason Scott (Dacre Montgomery), Angel Grove’s star quarterback and golden boy, finds his life after a school prank ends in tragedy and destroys his once-bright future. Facing detention for the remainder of the year, he meets social misfit Billy Cranston (Rj Cyler) and popular girl Kimberly Hart (Naomi Scott), who finds herself ousted from her social circle following an earlier school scandal. After coming to Billy’s aid when he is targeted by a bully, Jason and Billy form a friendship, which results in an outing at a closed-down mine on the outskirts of town where they run into Kimberly as well as bad boy Zack (Ludi Lin) and new girl Trini (Becky G). Following a mine collapse, the five discover the power coins hidden away by Zordon and are transported to him whose consciousness has been transferred into a spaceship trapped within the mine. Zordon explains to the group that they are the Power Rangers, an elite fighting force dedicated to the protection of the Zeo crystal.

The discovery and activation of the coins reawakens Rita, who immediately sets about her plan to build the army and capture the crystal. This group of strangers must come to together as a team and overcome adversity in order to prevent the destruction of mankind.

As I said, I walked into this film expecting to be disappointed and found myself anything but. From the very beginning the storyline had me engrossed, especially the reinvention of the backstory involving Zordon and Rita, which I found to be intriguing and made both characters more relatable to the present day rangers, specifically the mentoring relationship of Zordon and Jason, as both served as leaders of their respective teams.  Another favorite of mine was the use of panoramic views during actions sequences. The utilization of this lent an interactive perspective of the action.

Their names are same, but the faces are definitely different, as a new crop of actors suit up to become the Power Rangers. It was definitely an interesting approach to go with an entire fresh-face cast rather than established actors. A risky proposition, but I do believe it worked out better that way, as no one was coming in with the baggage of a previous television series or movie franchise (minus the homage to the original series towards the film’s climax; you’ll know it when you see it). In my opinion, the cast made the characters their own, adding more depth to select characters such as Billy, who is on the spectrum, and Kimberly, dealing with the aftermath of a past mistake. Each character had something that they had to overcome and that made them relatable. The scene-stealer of the movie was absolutely Rj Cyler as Billy, who was not only the source of much the laughter but also the film’s heart.

Power Rangers has some stiff competition at the box office this weekend, but I am giving it a high recommendation and believe that it has the potential to be the box office winner for the week. Loyal fans of the original series and the follow-ups will not be disappointed with the last incarnation of the franchise. So I suggest that you all GO-GO. Pun intended.

Jeremy Butler is a film school graduate of the International Academy of Design and Technology. He is been writing for Upcomingdiscs since 2012; however, movies have played a big part of his life for much longer. Favorite genres include horror, science fiction/fantasy, and comedy. Favorite movies are V for Vendetta, Boondocks Saints, Kiss Kiss Bang Bang, and The Godfather.
Insecure: The Complete First Season (Blu-ray) Wilson