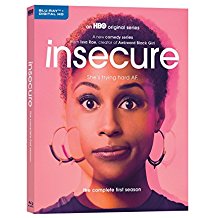 When people talk about racial and gender equality, they typically point to notions like everyone having the right to vote or the same opportunity to pursue their personal or professional passion without fear of discrimination. The premise of Insecure — HBO’s funny and insightful comedy series about modern relationships — is not quite that lofty, but no less worthy: black women reserve the right to be just as neurotic and lead love lives that are every bit as messy as their white counterparts.

“How different would my life be if I actually went after what I wanted?”

We meet L.A.-based Issa (star/co-creator Issa Rae) on the day she turns 29. Despite working for a nonprofit organization and having a steady, nice-guy boyfriend named Lawrence (Jay Ellis), Issa feels listless and anxious about her life as she approaches 30. She often functions as the token black person at her job and Lawrence — who is at a career crossroads after a failed business venture — isn’t exactly Mr. Excitement, which leads Issa to try and reconnect with an old high school flame named Daniel (Y’lan Noel). Issa’s best friend is Molly (Yvonne Orji), a likable and successful lawyer who happens to be unlucky in love. To help solve that issue, Molly applies for an exclusive dating app that promises to offer a higher class of men, all the while ignoring perfectly decent guys — like non college grad Jared (Langston Kerman) — who might not be “on her level.”

Insecure is loosely based on Rae’s popular web series Awkward Black Girl. Rae’s goal with both of her shows is to subvert the stereotype of sassy, confident, angry black women that is most commonplace in series where there is only one black female character. Even though they don’t air at the same time, Insecure pairs nicely with HBO’s Girls: they’re both loose, indie-minded dramedies that are the product of a star/creator excited to portray aggressively imperfect young women. Girls creator Lena Dunham found a big name champion in executive producer Judd Apatow, while the co-creator of Insecure is Larry Wilmore, who also helped shepherd ABC’s Black-ish — another smart and entertaining comedy that offers a multi-faceted look at modern African-American life.

As a result, Insecure walks a tricky tightrope of appealing to all audiences while addressing issues that specifically affect black women. The latter includes Big Picture topics, such as the idea that black men are into all sorts of women (white, Hispanic, Asian, etc) except for black women, and how black professionals have a smaller margin for error at work. However, there is also space for smaller picture riffs like the fact that all educated black girls seem to like Drake. Obviously, the issue of racism also pops up in various forms. I was more impressed by the subtler scenarios — Molly being asked to have an uncomfortable chat with the only other black employee in her office — than some of the scenes involving Issa’s cartoonishly tone deaf co-workers.

On the other hand, Issa and Molly’s respective quarter-life crises are familiar to anyone in their 20’s trying to figure out what they want. Issa, in particular, is wary of taking big swings in both her job and her relationship with Lawrence, both of which seem stuck in neutral. There are also gender-related double standards — Molly freaks out about a potential suitor’s past homosexual encounter, despite the fact that girl-on-girl action is considered acceptable and even desirable — that have nothing to do with the fact that most of the people on this show are black.

I was completely unfamiliar with the cast of Insecure prior to watching the show, which is unusual because I’m a movie/TV nerd who prides himself on identifying the most obscure performers. That being said, it’s probably no accident that I enjoyed the show more and more as the season progressed and I became more familiar and invested in these people’s lives. Rae has a winning, everywoman charm even as Issa does horribly irresponsible things like avoiding and dragging out her would-be breakup with Lawrence. Orji is equally convincing as a competent professional and as a woman who can’t quite figure out what she wants in her professional life. But my favorite performance might have been Ellis’ subtle work as the frustratingly and endearingly clueless Lawrence.

The season ends with Issa and Lawrence’s strained relationship taking a surprising turn and a renewed focus on Issa and Molly’s strained friendship, which is secretly the real heart of the show.

Insecure: The Complete First Season is presented in its original aspect ratio of 1.78:1. The 1080p image is arrived at with an AVC MPEG-4 codec at an average of 18 mbps. The low bitrate can almost certainly be attributed to the fact that HBO crammed all eight episodes *and* this set’s bonus material onto a single disc. While that’s not ideal, it doesn’t really detract from the visual presentation. (Collectively, the special features only take up a little more than 10 minutes of screen time.) What it might lack in razor sharp detail it makes up for in unexpectedly vibrant pops of color (mostly courtesy of Issa’s wardrobe and decorative choices) along with black levels that demonstrate strong separation during the frequent night time/nightlife scenes. Meanwhile, sequences that take place in the Los Angeles daylight are warm and even pleasingly soft at times for wide and panoramic shots. Overall, this a thoroughly clean and contemporary HD presentation.

The DTS-HD Master Audio 5.1 track is (like most comedies) dialogue-driven while packing an unexpected wallop. The most obvious instance is the room-rattling bass during Issa’s open mic performance of “Broken P—y.” The subs are also pressed into service during scenes featuring thumping music at various nightclubs (and at least one strip club). On top of that, both outdoor sequences and scenes that take place at restaurants or Issa/Molly’s jobs offer a dynamic and immersive experience thanks to effective and unobtrusive support from the rear speakers. Even moreso than the visual presentation, this track helps bring the world of Insecure to life.

Conjugal Visits: (4:04) An extended look at the outrageous (and fake) reality-show-within-a-show that Lawrence is watching during an episode. It’s only four minutes long, but the profanity, sex and ridiculous spellings for prisoner names fly freely here.

Insecure — In the Room (2:01) A roundtable — literally, since the trio is sitting at a round table — involving creator/star Issa Rae, writer/producer Prentice Penny, and writer/producer Dayna Lynne North. They outline the show’s mission statement (putting one’s insecurities forward is a brave thing to do) and show gratitude that the finished product is pretty close to their original vision.

On the Insecure Set with Issa Rae: (4:35) Rae is an enthusiastic and sarcastic tour guide as we follow her from the moment she sits down for hair and makeup in the morning to various on-location shoots. In between, she and her co-stars/crew members delightfully bust each other’s chops

Insecure: The Complete First Season features all 8 episodes on one disc. The season goes by in a flash and my enjoyment of the show increased as it settled into its rhythm and deepened its flawed characters.

Season 2 is slated to debut in July, and I’m curious to see what sort of trouble and awkward situations Issa and Molly get into…and create for themselves.