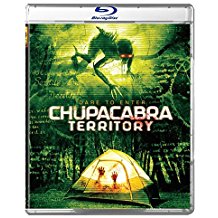 I have to admit I’m a sucker for cryptozoology, and stories about chupacabras and Bigfoot are fun to talk about. In the reality-TV-show world, there are many shows that have people travelling in the woods in search of evidence of these creatures. The proof is sketchy at best, but still it makes for entertaining television. Now we have the found-footage film Chupacabra Territory that dares to take us on an adventure into chupacabra territory where four hikers manage to get lost in the woods.  Is the found footage worth checking out? Well, that all depends how big a fan of the found-footage genre you happen to be.

As a creature that rose in popularity in the 90’s, when I’m watching this film with its ancient texts and stories about possession I’m sort of scratching my head wondering what the hell these people are going on about.  I’m fine with taking liberties with this kind of stuff; after all, it’s nothing that has been proven to exist, but it’s as though the filmmakers didn’t know if they were doing a creature-in-the woods film, a disease-outbreak film, an alien film, or a possession film.  It’s all over the place, and that frustrated me as a viewer, because the film just doesn’t make sense.

It all starts when Joe (Michael Reed) and three of his friends decide to go on a hiking expedition to an area where it is believed the chupacabra inhabits the surrounding woods.  Amber (Sarah Nicklin) is the supposed expert on the creature, who decides to wear a tiny skirt and tank top on this journey into the woods.  Maybe it’s the Eagle Scout in me talking, but seriously, she thinks this is the outfit to be wearing while hiking in the woods for a few days?  It’s this logic alone that has me rooting for the creature to kill this character off first, but sadly there are more pointless characters to be introduced who unfortunately meet their demise first.

(Sorry not sorry for side bar rant.)  It’s been nearly twenty years since The Blair Witch was released, and there have been dozens upon dozens of found-footage films released since then.  When you have films like REC, VHS, The Last Broadcast, Paranormal Activity, Grave Encounters, Cloverfield, The Bay, and many, many others, this is the bar you should be aiming to meet and surpass.  Stop being lazy and just doing a movie because you have a couple bucks and want to cash in on what’s popular.  Budget doesn’t dictate quality; story above everything is what rules the game.  That’s why the above titles are loved and held in high regard. (OK, end of rant.)

When the hikers reach where they want to go investigate, the trail is blocked off by the park ranger and they are told to go back, but we all know they won’t give up so easily.  Not heeding the ranger’s warning, things begin to go bad from booby traps in the woods to Amber suddenly blacking out and suddenly being overcome by sexual desires.  By the time the “chupacabras” make their appearance, they arrive a bit too late.

Of course even when things begin to go bad, common sense refuses to prevail and no one decides to leave, or is this simply the supernatural will of the chupacabra?  I think the point where I completely lost hope in this film is when Amber has a psychic connection with the chupacabras, but to make a stronger connection she needs sexual stimulation, so she takes one of the guys to the tent to have sex.  OK, if this were a porno I could buy this stream of logic, but instead this only induced an eye roll and laughter (not the kind that is intended).

Using GoPros and other handheld cameras, there are plenty of angles to keep things visually entertaining, but what is frustrating is the use of digital blood.  It’s distracting, and having it “splash” the lens just draws negative attention and quickly reminds the viewer that what they are watching is fake.

This had potential, but the film went completely off the rails early on.  If this were a student film there is a lot I could forgive, but this is something that actually involves people in the industry, no matter how slight their foot is in the door they still have more access than others who are struggling to have a career.  All I can say is, you can do better than this.

Brent Lorentson is a horror writer and film critic based out of Tampa, Florida. With a BA in Digital Film, he co-wrote and co-directed Scavenger Hunt. His short stories have appeared in various horror anthologies. In 2019 his short script Fertile Blood will be a part of the anthology horror film Slumber Party. He is currently working on his first novel A Dark and Secret Place set to be released in late 2019. Favorite Films: Taxi Driver, Fight Club, I Saw the Devil, The Wild Bunch, Dawn of the Dead, A Clockwork Orange, Pulp Fiction, Heathers, The Monster Squad, and High Fidelity.
Tuesday Round Up: April 25, 2017 Animal Kingdom: The Complete First Season (Blu-ray)