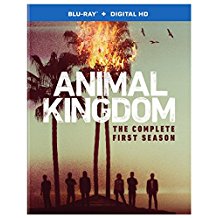 “Everyone outside the family is a mark. Family comes first.”

Meet the most dysfunctional crime family since The Sopranos. Not quite at the same level either on-screen or in quality, but once again we’re drawn toward another dangerous clan with criminal intent. I guess we could call them The Baritones. Actually Animal Kingdom is an apt description for television’s latest baddies. They’re about to head into their second season of mayhem on TNT where the series was the network’s top ratings winner during its run. Now that first season is out on Blu-ray from Warner Brothers, and it’s one crazy ride, of that you can be certain.

We are first introduced to young Josh Cody (Cole) His mother is a junkie, and she just rode off into the sunset on her last hit of horse (heroin). Now alone, Josh calls his estranged grandmother, who goes by the name Smurf, played by Ellen Barkin. Smurf takes him into her home, but it’s not the Waltons. Smurf is a regular Ma Barker. She organizes criminal jobs that are carried out by her four sons. She collects the money and doles it out on an allowance basis. Her right hand is adopted son Barry, who goes by Baz (Speedman). He helps plan the jobs and is the only one with a family of his own. His girlfriend, Catherine (Alonso) is an entirely different complication for the family. Brother Pope (Hatosy) has just returned home from over three years in prison. He took the fall for the entire family, but he’s off his meds and is quite crazy. He’s by far the quietest brother and the most dangerous. Brothers Darren (Weary) and Craig (Robson) are pretty much interchangeable bookends. They end up doing the heavy lifting, but they also are the hardest partiers in the family. From coke to jumping out of planes, these two do everything fast and furious. His uncles are not quick to trust Josh, and he has to find a balance with very little time to breathe.

Finn Cole has the toughest job to do on the series without doubt. The actor has to find a voice for Josh that allows us to witness this world through his eyes. It’s not an easy job. The characters are all larger than life for the most part, and it’s kind of tough to lay back and be noticed. Give the kid some huge credit. He’s swimmin’ with sharks here and manages to cut through enough to pretty much be the storyteller. He must be exhausted after a day’s shooting with this cast and these stories. Still, there’s strong material here for him. His teacher is being manipulated to get information from him, and part of him wants out of this nasty family. He blames them for leaving his mother to hang while they live an extravagant and loud life. Money flows like water, but that only raises the pressure to do bigger and bigger jobs. Will Josh play along, or will he eventually turn on the family? I suspect that’s the ultimate answer the series will build toward its eventual finale.

The series pushes a lot of boundaries. There is a particularly brutal murder which involves Pope and a character I can’t really name here. It’s not overtly bloody, but it’s certainly one of the more intense moments I’ve seen on a television series in quite a while. It’s both daring and risky. But that’s the kind of stuff you’re going to get if you spend any time at all with the Cody family on Animal Kingdom.

Each episode is presented in its original broadcast aspect ratio of 1.78:1. The 1080p image is arrived at with an AVC MPEG-4 codec. I am so glad to see that Warner did not try to slam all of these episodes on a single disc. You get a pretty good high-definition image presentation that holds up favorably to the broadcast quality. There’s a bit of a dark and gritty style here that makes this world very tactile with plenty of nice details and textures. Water plays a big part in the show and offers wonderful contrast to the “dirty” look of the overall show. It’s actually quite clever and plays out nicely here. Black levels are solid. There’s still a lot of material per disc, so I can’t say there isn’t some bit rate drop-off, but you won’t really notice it.

The DTS-HD Master Audio 5.1 is at times very aggressive but mostly serves the dialog of the series. You get the extra ear candy in the form of source music and party atmosphere moments. Again the sound of water is intentionally allowed to cut through the chaos, whether it’s a swimming pool or the boys’ surfing. No question this was a huge part of the production design. Dialog does cut through nicely with some subtle sub work giving it all a nice bit of depth.

There are several 2-minute features that cover things like characters, stunts, and production design. I do wish studios would not make us work so hard for features often under two minutes. At least provide a play-all.

Family Comes First: (14:16) A look at the dynamic between these characters offers behind-the-scenes footage and the usual cast and crew input.

It’s all based on an Australian film staring Guy Pearce as a detective trying to get to the family through Josh. I can’t compare the two, because I have not seen the film. I intend to check it out the first chance I get. There’s some interesting material here, and I would very much like to see where it all started. That’s just what I need, “another job to do“.

Gino Sassani is a member of the Southeastern Film Critic's Association (SEFCA). He is a film and television critic based in Tampa, Florida. He's also the Senior Editor here at Upcomingdiscs. Gino started reviewing films in the early 1990's as a segment of his local television show Focus. He's an award-winning recording artist for Omega Records. Gino is currently working on his 8th album Merchants & Mercenaries. Gino took over Upcomingdiscs Dec 1, 2008. He works out of a home theater he calls The Reel World. Favorite films: The Godfather, The Godfather Part II, The Body Snatcher (Val Lewton film with Karloff and Lugosi, not the pod people film), Unforgiven, Gladiator, The Lion King, Jaws, Son Of Frankenstein, The Good, The Bad And The Ugly, and Monsters, Inc.
Chupacabra Territory OPPO Releases UDP-205 Audiophile Universal Player