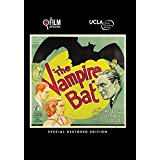 The early 1930’s was an excellent time for production of horror films. 1931 saw the classic productions of Frankenstein and Dracula, and 1932 The Mummy and White Zombie. These are all what I would call genre-defining films: they have refined the formulaic plots (mad scientist, supernatural threat) that came before them, but did so while incorporating the famous images we see today. Think about it; 80 years later and we still see Frankenstein’s monster with a flattened head and bolts, or Dracula with the jet-black widow’s peak and cape. As iconic as these films have become, there are countless productions that have flown under the radar of popularity. Frank R. Strayer’s The Vampire Bat is one such film that is worthy of more attention.

As the villagers of a small town begin dying of blood loss, a motley crew of town elders jump straight to the conclusion of vampirism. However, Inspector Breetschneider (Melvyn Douglas) remains skeptical, allowing a voice of reason the audience can adhere to through the supernatural claims. While Breetschneider begins to investigate the exsanguinations, the town’s scientist, Dr. Otto von Niemann (Lionel Atwill) cares for each of the victims. Soon enough, the town begins to suspect Herman Glieb (Dwight Frye), who has a fascination with bats.

The very first praise I have for the film is Melvyn Douglas’s acting. As much of a cinephile as I am, I’m embarrassed to admit that I’ve never seen one of his early roles. The man is a powerhouse. I am accustomed to acting from the 20’s and 30’s being rather overdramatic given the advent of “talking pictures” coming as late as 1928, but Douglas’s acting was closer to that of Cary Grant’s than his co-stars: he sticks out like a sore thumb. I use a metaphor with a negative connotation simply because in certain moments it was rather distracting. For example, in the opening of the film when the “village elders” are all arguing about vampirism, they appear to be a group of actors in the 1930’s that are acting “frantically.” However, when the group invites Douglas into the dialog, the tone of the film shifts tremendously given his physical demeanor and his natural, almost witty, cadence.

The film itself is just over an hour long, and Strayer does an excellent job with the pacing. The narrative wastes no time getting from one scene to the next, and surprisingly, it was very cohesive. There weren’t as many plot holes as I was expecting. Really the only critique I could give the narrative is to improve its explanation of certain supernatural occurrences. Yes, they are supposed to be supernatural, but when it begins to happen on screen, you don’t necessarily understand what is happening for a bit. A character uses telekinesis twice, but your only clue that it’s happening is a close-up of his very stern expression and scenes intercut to depict what he is controlling. At first glance, it really just looks like a character is staring off in to space for three minutes.

The quality of the film looks fantastic, considering its age. The only feature the disc comes with is a commentary track with the film and a little featurette that interviews Melvyn Douglas’s son. The short documentary is a fun watch: its only about 15 minutes long, and you get to see a lot of clips of Douglas’s acting. Overall, the film itself is worthy of any horror junkie’s collection. Not to knock any of the classics I previously listed, but I don’t understand why this film isn’t as popular. It is a wonderful hour of entertainment with semi-abused tropes and a fun narrative to follow.