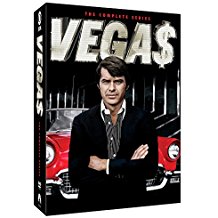 By 1978 the television detective model had been nearly complete and possibly already a cliché. Dan Tanna might have well been the complete model as far as the formula goes. It was almost as if you could go down a checklist and, like Dr. Frankenstein creating a monster, you would check off the necessary elements. The scripts could then almost write themselves, and you let the show fly on autopilot for three seasons or so until someone decides to look behind the curtain.

So let’s go down that checklist, shall we?

Hot scantily clad girls? Did I mention this was Vegas? Showgirls galore. Check.

Do something cool with the title like replace an S with a $? Check.

Now, you mix that checklist with a surly murder case each week where it seems at times that the detective is in over his head or about to get killed. Throw in some witty one-liners. Top it all off with some car chases and a few fisticuffs, and you have the 1970’s cop/detective series. Vega$ was the poster child for those kinds of shows. While it had all of the action and pieces of the formula going, it never really rose above the crop. Once the formula got old, the series was gone. This was an early series created by Michael Mann, who would go on to bring us such music-video-style shows as Miami Vice.

The show has been released in those CBS half-season sets over the years. It’s nice to see all three season intact and all in one place. Sadly there are only episode promos as any kind of bonus content. I also don’t like the overlap large case. Discs often slip free and get scratched. I place mine in another folder to avoid the issue. I do that with all of these CBS collections.

Urich was the main draw here. Women found him sexy, and his tough-guy charisma made him the envy of the 98-pound-weakling guys. This was a detective show with a higher-than-average budget. It had top guest stars and elaborate locations. Perhaps it was the money that made this one hard to keep going after three years. It’s a bit glitzy, but picking up a copy sounds like a good idea. “Maybe this is something you oughta do.”

Gino Sassani is a member of the Southeastern Film Critic's Association (SEFCA). He is a film and television critic based in Tampa, Florida. He's also the Senior Editor here at Upcomingdiscs. Gino started reviewing films in the early 1990's as a segment of his local television show Focus. He's an award-winning recording artist for Omega Records. Gino is currently working on his 8th album Merchants & Mercenaries. Gino took over Upcomingdiscs Dec 1, 2008. He works out of a home theater he calls The Reel World. Favorite films: The Godfather, The Godfather Part II, The Body Snatcher (Val Lewton film with Karloff and Lugosi, not the pod people film), Unforgiven, Gladiator, The Lion King, Jaws, Son Of Frankenstein, The Good, The Bad And The Ugly, and Monsters, Inc.
The Vampire Bat Saturday Night Fever: Director’s Cut (Blu-Ray)