Guardians Of The Galaxy Vol. 2

Posted in: The Reel World by Brent Lorentson on May 4th, 2017 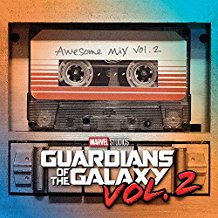 When I walked out of the theater in 2014 after seeing Guardians of the Galaxy I knew I had just seen something special, and knowing a sequel was already guaranteed had me excited to see what was next for this band of misfits.  Since the release in 2014 the film hasn’t just become my favorite Marvel film; it is one of my favorite films, period.  So as photos and trailers began to trickle out, I began to wonder if Guardians of the Galaxy Vol. 2 could actually hold up to the first.  For many the first film was a surprise hit that no one saw coming, something so toe-tapping fun between the soundtrack and action scenes, but most importantly it was the chemistry of the Guardians that had won over the audiences.

James Gunn (Co-writer and Director) from the first film returned to helm the film, which is being greeted by such high expectations I feel it’s unfair, because I think the first reaction many will have is, it was good but not as good as the first.  Fans and critics alike tend to go into certain films with these unrealistic expectations. I’ve done this myself and have learned it can be a nasty habit that can handicap the experience.  It’s why sequels tend to suffer and divide audiences because of the expectations that are brought into the film.  What James Gunn has managed to do is deliver a film that is nearly equal to the first but manages to be bigger in scale, yet its story is incredibly intimate and relatable.

The film opens up in 1980 Missouri with a CGI de-aged Kurt Russell driving around with Meredith Quill (Laura Haddock).  It’s a sweet little moment that introduces us to who Peter Quill/ Star-Lord’s (Chris Pratt) father is, but of course there is more to this to follow.

The film jumps ahead to present day where the Guardians have been hired to defeat a large monster.  As the fight and opening title sequence unfolds, the focus is actually on an adorable yet oblivious baby Groot dancing to “Mr. Blue Sky” by ELO. This just sets the tone for everything that is to follow for the team and the film.

The Sovereign at first seem to be the film’s baddies, or at least the group attempting to chase down the Guardians.  This is a race of gold-painted figures that honestly seem a little flat in comparison to the numerous other figures we’ve met in the Galaxy so far.  So when Ayesha (Elizabeth Debicki) reaches out to Yondu (Michael Rooker) to assist in the capture of the Guardians, there is more life injected into the threat against the Guardians.

As for the Guardians, in this film we get plenty of banter between them which is just as funny this time around, but more importantly we get to see a little deeper into each of them, and surprisingly, it’s incredibly effective. The core of this film is about family and what it means to our band of misfit heroes.  For Peter coming to terms with his father being a celestial figure, to Gomora (Zoe Saldana) in constant conflict with her sister Nebula (Karen Gillan) to Drax (Dave Bautista) and Rocket (voiced  by Bradley Cooper) who have struggles of their own that they are dealing with.  While these characters are far from broken, they are all damaged, and all of them want a place to belong, and it would seem they all belong together.  With the script it seems Gunn understands that is what draws readers to the comics and story in the first place. Sure, the effects help get people into the seats, but it’s the connection to the characters and how they have the same problems as readers and watchers; that is what forges a deeper bond to the material.

Don’t worry, the film isn’t a sappy tale with everyone talking about their feelings; it’s a hell of a good time.  Each character gets a moment to shine, and in a big way.  It’s so hard to say what my favorite moment is in the film simply because there are so many awesome moments. Music plays such an important role in these moments and in the film, and as impressive as the soundtrack was to the first film, the soundtrack this time around surpasses it in so many ways. “Come a Little Bit Closer” by Jay & The Americans and “Southern Nights” by Glenn Campbell are key songs to some of my favorite moments and will forever change how I view these songs, and what is even a little cooler in my book is how these songs will now make an impact on a younger generation that before this film would never have been exposed to the music. There are several other great songs and great moments in this film, but I’m not here to ruin that experience.

Drax and Yondu are the characters I feel will surprise people the most in this film.  Bautista seems to have grown comfortable in this role, whether it’s in a scene where we see some of his deep seeded emotions, or his numerous comedic scenes, he has come a long way in a short amount of time.  But it’s good ol’ Yondu that seems to have the greatest arc in this film. I’ve always liked Michael Rooker, but this is the role he was born to play. Between his interactions with Rocket and Peter in this film I just never expected this, to just like him so much. After this film you’ll know what I’m talking about, and I’m certain people will be turned into Yondu fans by the end of the weekend.

I love this film, and personally, I feel with a couple more times of viewing this it may even be on par with the first film or surpass it. It’s the relationship with Peter and Ego that has stuck with me the most since seeing the film a couple nights ago.  The chemistry between Russell and Pratt is undeniable how well they play off one another, but Pratt has come a long way in such a short amount of time.  Pratt has been relatively open about his father’s passing in 2014, and when we see the more raw and emotional scenes between Peter and Ego, I believe we’re seeing something more than just a solid performance.  In many ways it’s hard to not compare Ego and Peter to Darth Vader and Luke Skywalker, but with as many similarities as there may be, the two couldn’t be more different. Both may discover their fathers, but the lessons learned from these interactions definitely equal out to different impacts.

Guardians of the Galaxy Vol. 2 is hands down the biggest film in scale that we have seen to date from the Marvel Universe.  The use of 3D is incredible at times in capturing size and depth, but most remarkable is the color palette on display.  This is simply a beautiful film. From the scenes on Ego’s planet to the beautiful space battles, there is so much eye candy here it pretty much demands to be seen on the largest screen you can get to.  Personally this is the movie to beat of the year, despite a certain other space sequel coming out in December.

For the comic book geeks out there, there are plenty of Easter eggs in this film as well as numerous cameos that fans of all types can appreciate.  Mantis is a fun addition to the growing cast of characters of the Marvel Universe, and as we get closer to the Infinity War, I’m curious to see how the Guardians will react and interact with the Avengers. With a third Guardians film already set up, I’m excited to see how this group will continue on with their adventures in space.  There is so more I want to say, there is so much geeking out to be had with this film, and what certain developments can mean in future films, but that’s for another time.

“He said welcome to the freakin’ Guardians of the Galaxy, only he didn’t use freakin.”

Brent Lorentson is a horror writer and film critic based out of Tampa, Florida. With a BA in Digital Film, he co-wrote and co-directed Scavenger Hunt. His short stories have appeared in various horror anthologies. In 2019 his short script Fertile Blood will be a part of the anthology horror film Slumber Party. He is currently working on his first novel A Dark and Secret Place set to be released in late 2019. Favorite Films: Taxi Driver, Fight Club, I Saw the Devil, The Wild Bunch, Dawn of the Dead, A Clockwork Orange, Pulp Fiction, Heathers, The Monster Squad, and High Fidelity.
Apocalypse Child Streets of San Francisco: The Complete Series