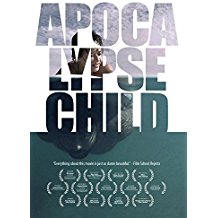 It is always interesting to see how the history of cinema weaves its way back into the art form, especially when it is incorporated into the narrative itself. For example E. Elias Merhige’s  Shadow of the Vampire (2000) constructs its narrative around a fictional filming of F.W. Murnau’s  Nosferatu (1922). Recently, Gary Oldman announced his interest in writing and directing Flying Horse, a biopic of Eadward Muybridge, one of the founding fathers of moving images as we know them. Cinema is the only art I am aware of that artists take strides to be self-reflexive for the sake of appreciation of the medium. Apocalypse Child (2015) toys with self-reflexivity, but in a very unique way: It portrays cinema as a quasi-mythical presence through alluding to Francis Ford Coppola’s hellish stretch of filming Apocalypse Now (1979) in the Philippines.

In the surfing town of Baler, Ford (named after the famed director) is somewhat of a man-child who makes his living as a surfing instructor, and lives with his adopted mother (14 years his senior). During the film, Ford and his mother are housing the young Fiona, whose dying grandmother is a well-known member of the village. During Fiona’s stay, she and Ford develop a relationship together, but Ford refuses to visit her grandmother. Eventually, Ford’s successful adoptive brother, Rich, returns to his home town with his fiancée to be married. Tensions begin to rise as we learn that Ford and Rich have a tumultuous past that has never been remedied.

When speaking about the writing, this film is very smart. It just takes a little too long to become a gripping drama. The first half of the film views as a character study piece, observing Fioana and Ford either surf or sleep together. After about twenty minutes or so, we are introduced to Ford’s conflict with Rich, and about twenty minutes after that, we finally realize the full scope of the conflict. So the pace of the screenplay could be changed drastically. However, once you finally understand the implications and complexities that are written into each character, the film becomes this enigmatic puzzle of myths that each of the characters must confront to overcome their demons. Ford doesn’t want to visit Fiona’s grandmother because she reminds him of his past, growing up with Rich. Ford’s adopted mother lives with some perverted fantasy of sleeping with Coppola in her teenage years, after having wandered onto his set, instead of confronting a different perverse truth. Rich must live with a physical disability from his youth that was ultimately Ford’s fault. Each character’s conflict is expertly written, but the film is rather uninteresting until their complexities arise.

Visually, the film is very interesting, but I feel that the image was distorted within the process of producing the DVDs. Many of the scenes look beautiful, but are almost always tarnished by pixilation. It is severely frustrating, especially considering that the filmmakers tried to film surfing in a way that doesn’t look like a sporting event, but rather, an almost transcendental experience. In addition to the stylistic visuals, the casting choice of Sid Lucero as Ford was a brilliant move. Lucero wears a full, dark beard throughout the film, adding a tremendous amount of credibility to the idea that he could indeed be Coppola’s own son.

Unfortunately, no matter how incredible the images are (or could have been prior to being written onto DVD), the slow pace of the beginning of the film make it a little difficult to appreciate as a whole. If you are a fan of cinema and the history surrounding Apocalypse Now, this is a relatively rewarding narrative if you are patient with it. If you are completely unaware of any history regarding Coppola’s film or are only familiar with that name being synonymous with the wine aisle at your grocery store, then Apocalypse Child is most likely not for you.

The Affair: Season Three Guardians Of The Galaxy Vol. 2