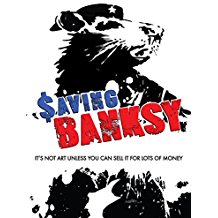 When it comes to graffiti art there is only one name that comes to mind, and it’s Banksy. Before checking out this documentary I had no clue that graffiti art was actually something people took seriously, beyond gang tags and little kids marking up a wall for fun. Apparently there are numerous acclaimed graffiti artists around the world, artists who define themselves with their own unique style and message they’d like to share with the rest of the world, even if their message will most likely be painted over.  In 2010 Banksy came to San Francisco to vandalize some walls with a little paint, and it was enough to create a buzz across the city about what the artist would do, and out of that spawned this unique documentary that explores the value of graffiti art.

Director Colin Day states at the start of the film that his attention was to simply document the progress Banksy made as his graffiti art was made and put on display for the public.  Along the way he interviews several other graffiti artists who discuss their thoughts on Banksy and about why they do what they do. Just about anywhere you go throughout the world, graffiti is illegal, and the consequences have various punishments that range from a simple fine to even jail time.

As the paintings go up through the city, it isn’t long before lesser graffiti artists deface the Banksy projects; all but one manage to be destroyed or simply painted over. “The Banksy Rat” somehow survives defacement long enough so that Brian Grief (also the film’s executive producer) can strike up a deal with the building’s owner so that he can have it removed and he can preserve the art piece, to hopefully put it on display in a museum where more people can enjoy the work.

The struggle we see Grief go through in order to preserve and hopefully put the artwork on display becomes the new and more fascinating focus of the film. For two years we see Grief seem to go in circles with museums that seem to show interest in showing the work, but they will only do so with consent from Banksy. Banksy, already a secretive artist to begin with, would only be opening himself up to confessing to a crime by giving his consent, not to mention Grief has no solid way of confirming Banksy even created the work, despite experts all agreeing that he is most likely the artist.

The odd thing about this film, besides the struggle Grief has to show this work, something he’s invested over $40,000 into and his offers to donate it for free are rejected, it’s the film’s villain that makes this all the more unique. A man who has made a living off of selling Banksy art without permission seems to be the only willing buyer of the piece Grief has, yet in the graffiti community this buyer is the most loathsome figure of them all.

Running at a slim 69 minutes, Saving Banksy is surprisingly an engaging drama that had me rooting for Grief to finally get some resolution to getting “The Rat” on display.  The fill-in interviews with most of the graffiti artists are there mostly to fill out the runtime, but there are a few artists that share some insightful information on what they do and the influence Banksy has on them and the art community.  Honestly this is a film I normally would have passed over, and I’m relieved I took a chance on this, because I really enjoyed this one, and it’s even had me searching on Google for other works of Banksy that are out there.  For art lovers this is sort of a must-watch, I’d imagine, but even for those like me who can’t tell the difference between a Jackson Pollock painting and a kid’s art project, this little documentary has enough drama to pull just about everyone in.

Brent Lorentson is a horror writer and film critic based out of Tampa, Florida. With a BA in Digital Film, he co-wrote and co-directed Scavenger Hunt. His short stories have appeared in various horror anthologies. In 2019 his short script Fertile Blood will be a part of the anthology horror film Slumber Party. He is currently working on his first novel A Dark and Secret Place set to be released in late 2019. Favorite Films: Taxi Driver, Fight Club, I Saw the Devil, The Wild Bunch, Dawn of the Dead, A Clockwork Orange, Pulp Fiction, Heathers, The Monster Squad, and High Fidelity.
Tuesday Round Up: May 9, 2017 The Godfather & The Godfather Part II: 45th Anniversary (Blu-ray)