Posted in: Contests, Expired Contests by Gino Sassani on May 12th, 2017 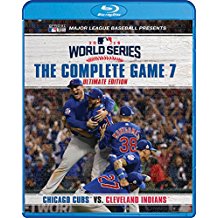 Baseball season is underway across the country and it won’t be long before we’re into another World Series. It will have to be some series to compete with last year’s Chicago win over the Indians in 7 games. What better way to get into the spirit than to revisit that famous 7th game of the 2016 World Series? Shout Factory has you covered and they’re playing along with us at Upcomingdiscs to throw out the first prize of the baseball season. They’ve given us a copy of The 2016 World Series: The Complete Game 7 Ultimate Edition on high definition Blu-ray. You get the complete game along with highlights of the Cubs’ play-off run to the final game.

Gino Sassani is a member of the Southeastern Film Critic's Association (SEFCA). He is a film and television critic based in Tampa, Florida. He's also the Senior Editor here at Upcomingdiscs. Gino started reviewing films in the early 1990's as a segment of his local television show Focus. He's an award-winning recording artist for Omega Records. Gino is currently working on his 8th album Merchants & Mercenaries. Gino took over Upcomingdiscs Dec 1, 2008. He works out of a home theater he calls The Reel World. Favorite films: The Godfather, The Godfather Part II, The Body Snatcher (Val Lewton film with Karloff and Lugosi, not the pod people film), Unforgiven, Gladiator, The Lion King, Jaws, Son Of Frankenstein, The Good, The Bad And The Ugly, and Monsters, Inc.
The Expendables 2 (UHD Blu-ray) (4K) King Arthur: Legend of the Sword