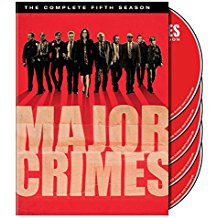 After five seasons I don’t really think of Major Crimes as a spin-off from The Closer. It has gone on to establish itself as a much better show than its former version ever was. We have become very comfortable with most of these characters, and the series isn’t really looking over its shoulder anymore, if it ever did. This is one of those shows that’s just easy to watch. There might not be anything groundbreaking going on here, but it feels like that old worn shirt that you love to wear because it just feels good having it on. That’s the kind of thing that can go on for many years, and Major Crimes doesn’t appear at all to be slowing down. It’s become an anchor for TNT, and I don’t see that changing any time soon.

Pretty much the rest of The Closer’s cast remains intact. The senior officer on the team is Lt. Provenza (Bailey); he’s still partnered with Lt. Andy Flynn (Denison). It’s a good combination, as both characters spend the season feeling the effects of age. Andy is injured early on and has to deal with being out of full action. It’s a nice change-up where you can’t just jump on a moving van and walk way with a small scrape. Lt. Tao (Chan) is still one of the tech experts, along with Buzz (Keene), who also serves as the videographer of the unit. Buzz gets a promotion to reserve officer, but he’s still pretty much the guy with the camera. Detective Sanchez (Cruz) is back after being forced into six months’ suspension and taking anger management classes. He still loses his cool a little, but I found him an awkward character this season. The delivery has changed to an almost deliberate tight, calm cadence. He’s obviously struggling to keep his temper under control. He does get to let go of an old rage this season when new information about his wife’s final days comes to light. Dr. Morales (Del Arco) has a bit of a testy relationship with the police unit this season. It’s nice to see some strain here. The unit also includes Kearran Giovanni as Detective Amy Sykes. She gets to have a huge arc in the final five episodes of the season. I like that we’re seeing more of her. Nadine Velazquez as the unit’s D.A., Emma Rios, might be the driest performance of the season. The standout character has to be Lt. Provenza, played by M*A*S*H’s G.W.Bailey. The character is actually a lot like that show’s Rizzo. Just pretend that he finally got out of the Army and got into law enforcement. He’s always complaining and getting into trouble, but he’s smart, and his instincts are often dead-on.

Rusty (Martin) continues to be my least favorite character of the show. He gets a lot to do this season, and the more he does, the less I like him. He’s not really a good guy. He does what he wants and appears oblivious to how those around him feel. That means he jeopardizes cases by doing what he wants without much regard for anyone else. He ends up apologizing a lot, but there are never consequences, so his behavior doesn’t change. I wouldn’t mind such an awful character if the show were not somehow trying to say he’s a nice guy. The show has diminished the more screen time Rusty gets. This season he ends up getting involved with Buzz and his effort to solve the 30-year old crime of his murdered father and uncle. It’s an obviously emotional time for Buzz, but Rusty wants to do what makes him feel heroic and good. He’s in a serious relationship this season, and the best Rusty moment ever is when his partner’s boss calls him out for what he is. I was beginning to think that the writers just didn’t get what they were giving us here. Maybe they do, after all. He obviously has no respect for the people who care about him. Enough of Rusty already.

It’s a big season for the characters. A three-part episode begins with a courtroom shooting that takes one of the show’s characters away from us and threatens to do the same with another. White Lies puts together some of the most dramatic moments in the show’s history. The season also sees the unit become the victim of a power struggle that brings The Practice’s Camryn Manheim into several episodes as a kind of hostile nemesis for the team. I’m not sure if it is the actress or the parts she gets, but she has yet to play a very likable character. It’s either great acting or good typecasting. She tends to put me in mind of female canines, if you catch my meaning. It comes to a climax in the two-part season finale when she interferes in an explosive case that literally blows up the season.

The squad gets a new detective along the way in former undercover cop Detective Wes Nolan, played by Daniel di Tomasso. He fits in rather quickly as far as chemistry goes with the unit. Of course, as an undercover cop he was used to being pretty much on his own, so he’s still learning the whole teamwork thing. All of the characters get some good moments. Julio has become a foster father and falls in love with a kid raised by white supremacists. It’s going to put those anger management sessions to the test. Andy and Raydor take their relationship to the next level by talking about moving in together. It leads to one of the more amusing episodes where a real estate agent that Andy was using to house-shop ends up dead in the house’s pool. Provenza uses the investigation to try to help his old partner out with a good deal on the house. Mike wins an award for his television show, which leads to some jealousy from Andy, particularly when he finds out how much cash Mike’s raking in from the gig. Sykes has to deal with the consequences of a cross-examination in court that makes her look bad. Even Dr. Morales, who gets limited screen time in the show, gets a visit from his father. He kind of told Dad he was in charge, so the unit pretends to be taking their lead from the good doctor, who lets it all go to his head. Yeah, it’s been done on a hundred shows before, but as I mentioned at the start, it’s the way these characters play it out that keeps it fresh and entertaining.

There are 21 episodes on five discs. The only extras here are deleted scenes on select episodes and a gag reel. It had been rumored that this would be the show’s final season. I’m happy to report that nothing could be less true. The show looks to be getting a slight format change in the Season 5 finale. Raydor is getting promoted, and we are promised some big new things for the Major Crimes unit. I’m pretty sure you can expect more than just a vanilla season next year. Call it “very vanilla”.

Gino Sassani is a member of the Southeastern Film Critic's Association (SEFCA). He is a film and television critic based in Tampa, Florida. He's also the Senior Editor here at Upcomingdiscs. Gino started reviewing films in the early 1990's as a segment of his local television show Focus. He's an award-winning recording artist for Omega Records. Gino is currently working on his 8th album Merchants & Mercenaries. Gino took over Upcomingdiscs Dec 1, 2008. He works out of a home theater he calls The Reel World. Favorite films: The Godfather, The Godfather Part II, The Body Snatcher (Val Lewton film with Karloff and Lugosi, not the pod people film), Unforgiven, Gladiator, The Lion King, Jaws, Son Of Frankenstein, The Good, The Bad And The Ugly, and Monsters, Inc.
Becker: The Complete Series Bambi: Anniversary Edition (Blu-ray)