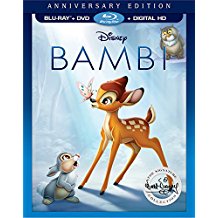 The forest is alive with the news. It travels from tree to tree, from animal to animal. A new prince has been born, and the creatures of the woods gather to welcome the young fawn. His name is Bambi, and he soon wins the hearts of the entire population of the forest. From his first attempts to stand on his wobbly legs to his discovery of the things that surround him in this brand new world, Bambi takes us on an emotional journey through the circle of life.

Bambi won over children of all ages throughout the world in the last 70 years, but like the young prince’s own first steps, it was a bit of a rocky start. The film took about six years from its inception to the time it reached the box office. At one time it was to be the very first Disney animated feature. That honor ended up going to Snow White And The Seven Dwarfs. Bambi would end up becoming the third Disney feature behind Pinocchio. The film was the culmination of the efforts of some of the best in the business. Disney was still light years ahead of any other studio when it came to animation. The public had become completely infatuated with Snow White, and there wasn’t any reason to believe that Bambi wouldn’t follow comfortably in that film’s footprints. But the world changed drastically after Snow White. It wasn’t long before the world was fighting a World War, and the European markets would be all but closed to releases. To make matters worse, American audiences weren’t exactly in the mood for an animated coming-of-age story even as the United States was about to come of age on the world stage. The truth is that Bambi failed miserably at the box office even as the Disney studios were overtaken by the Defense Department and ordered to concentrate on propaganda pictures to help with the war effort. Bambi appeared destined to become a short blip on the radar and doomed to disappear into utter obscurity, perhaps a footnote in the history of the animated feature.

But history has a funny way of not exactly working out the way it appears or is expected. Somewhere along the way audiences throughout the world rediscovered Bambi. By the 1960’s it was a movie house favorite for family entertainment. Most of us who were little tykes during that decade were exposed at one time or another to the tale of the little fawn. Today Bambi stands as the most famous deer character of all time, except maybe that little red-nosed guy during the holidays. Now Disney has added this beloved title to its growing Diamond Collection of Blu-ray releases. Like the other titles in the series, Bambi has been lovingly restored and released in pristine condition, likely looking better than it did when it was originally released in 1942.

When you watch Bambi, several things come immediately to mind. The film was very much a product of the Disney Studios of the time. Fantasia was Walt’s own ambitious dream, and the studio had been tooled to work on that masterpiece. Bambi’s design could not help but be shaped by such a studio-wide commitment. There is little dialog in Bambi. In fact, there are less than 1000 words spoken in the entire film. There is, however, incredible music. Like the segments of Fantasia, there are vignettes within Bambi that are choreographed symphonies where music and image provide an intricate dance so intertwined that one simply could not exist without the other. One such perfect example occurs as Bambi experiences his first rainstorm. The first few isolated drops of rain are punctuated by distinctive musical notes and sounds. As the storm gathers strength, the symphony increases its intensity. Cymbal crashes punctuate thunder and lightning, while subtle instruments combine with the rousing rush of others to create a storm as much a product of the music as it is the animation. Such pieces are the bread and butter of Fantasia and mark the distinctive style of Bambi as well.

You will find that the film’s animals aren’t the human/hybrid creatures that usually populate Disney animated features. Walt insisted that these animals remain anatomically faithful to the animals they represented. He brought real animals to the studio so that the animation team could spend time with them and learn their design and particular methods of movement. These animals look quite a bit like their natural counterparts. That isn’t to say that they don’t speak and convey convincing emotions with their movement and facial expressions. This is the true genius of the film. While remaining accurate to a large degree, these animals are capable of great emotion. Remember there isn’t a lot of talking here, so these animated creatures must carry the passion of the film with few words. It’s an accomplishment that hasn’t been repeated even by Disney since.

The film’s backgrounds are not the detailed images that usually adorn these kinds of films. While the animals were made to look authentic, the forest was presented in a stylish manner that provided more of an emotional than a physical precision. Credit the style to Disney discovery Tyrus Wong, who brought his native Chinese artistry to the project. Wong was an inbetweener at the studio when he presented some sketches for Bambi, unsolicited. It might well have been one of those happy accidents that saved the film. Walt had been struggling with how to present these backgrounds within the concepts he had staked out for the film. It was causing serious problems that threatened to derail the project. Combined with Walt’s own multi-plane camera system, the backgrounds provide more mood than detail. It was the perfect accompaniment to the character designs.

The characters are as memorable as anything else. Bambi’s voice was provided by young Donnie Dunagan, who played the young playmate to Karloff’s Monster in Son Of Frankenstein. Dunagan regrets today that he distanced himself from the role, too ashamed to let his Marine comrades in on the secret for fear of getting the nickname Bambi. Peter Behn steals the show with his voice work for Thumper. The rabbit was the one that stuck with me over the years, and in a film with few words he had the best lines.

Just one look at this Blu-ray release and it isn’t hard to understand why Disney had the reputation that he did. It’s also not very difficult to understand why the film has had such lasting power or inspiration after 70 years and a pretty rocky start. This is one of those Blu-ray events that are cause for picking up a player, if you haven’t already. My friends at  Oppo Digital will help you get a quality machine. Put that together with Disney’s Anniversary Edition of Bambi, and it translates to quality family time … Priceless!

Bambi is presented in its original full frame aspect ratio of 1.33:1. The 1080p image is arrived at with an AVC MPEG-4 codec at an average 30-35 mbps. This is not Disney’s most colorful film, and there might be a temptation to fault the image presentation for what is often more abstract with less bright colors. That would be a huge mistake. This transfer reproduces the movie precisely as it has always been intended to be seen. Detail allows you to truly appreciate the incredible animation design. The facial expressions of the characters come through with wonderful effect. The print has been restored to an almost pristine condition. The sharpness brings into tight focus the beautiful Tyrus Wong backgrounds and the eerie 3D effect of Walt’s multi-plane camera system. You will have a hard time accepting the fact that the movie is 70 years old. Black levels are perfect. There’s plenty of shadow detail to allow you to feel the textures and moods of this masterpiece from start to finish.

The DTS-HD Master Audio 7.1 is just as spellbinding. The musical performances here are really stars of the production. While a restored version of the original mono is also available, this option brings the music to life in a huge way. Like Fantasia before it, the new surround mix fully envelops you in the score. The little bit of dialog is perfectly mixed front and center to allow you to experience the charm of these child performers. Even with the great expanse of the audio presentation the intimacy of the original production remains intact. Hard to believe? Let your own ears decide.

There is a DVD copy of the film and a port of the extras from previous editions. There aren’t any huge new extras here. All are under 10 minutes. Still… it’s the kind of film that manages to draw in a few gems.

Studio Stories – Bambi: (4:56) Archived recordings of Walt during 1956 interviews highlight this feature. You get some vintage footage of Walt and the animators looking at real animals and conditions to get the animation just right. Add some nice storyboards and it’s a sweet feature, if very brief.

Deleted Scenes: (7:25) There’s an introduction to both scenes by animator Floyd Norman, who worked at Disney Animation for many years. These are animated storyboards with a few words from Walt himself, courtesy of a voice re-creation but taken from his meeting notes.

The Bambi Effect: (3:00) A short lesson on techniques used in Bambi that carried over to even current Disney projects.

Years later the crew who would deliver Disney’s best animated feature to date, in my humble opinion, would reference Bambi quite intentionally. The Lion King borrows heavily from the circle of life themes found in Bambi. You’ll even find a few shots that are direct homage to the 1942 film. Of course, they are not the same movie, but many associated with The Lion King admit there would have not been that film if not for Bambi. In fact, Elton John himself attributes his entire career to a viewing of Bambi he had when he was eight. “I made that last part up myself.”

Gino Sassani is a member of the Southeastern Film Critic's Association (SEFCA). He is a film and television critic based in Tampa, Florida. He's also the Senior Editor here at Upcomingdiscs. Gino started reviewing films in the early 1990's as a segment of his local television show Focus. He's an award-winning recording artist for Omega Records. Gino is currently working on his 8th album Merchants & Mercenaries. Gino took over Upcomingdiscs Dec 1, 2008. He works out of a home theater he calls The Reel World. Favorite films: The Godfather, The Godfather Part II, The Body Snatcher (Val Lewton film with Karloff and Lugosi, not the pod people film), Unforgiven, Gladiator, The Lion King, Jaws, Son Of Frankenstein, The Good, The Bad And The Ugly, and Monsters, Inc.
Major Crimes: The Complete Fifth Season Prisoner X