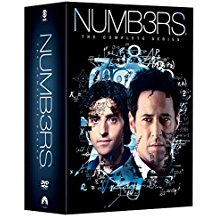 Do you believe that a numbers wizard can predict the most random of human actions with mathematical equations so accurately as to know where and when such a person will be? If so, then I suggest you put down that letter you are writing to Santa, finish eating that egg a bunny left for you, go to your pillow and pull together all of the loot you got from the tooth fairy, and plunk it down on season three of Numb3rs. No, that’s not a typo; apparently they believe that letters aren’t good enough to stand on their own, so they inserted a 3 where the e should be. Aren’t they so clever? Not. In the fairy tale world of Numb3rs, all you need is an almost obsessive knowledge of math, and the crooks don’t stand a chance. It’s almost unfair, isn’t it? Those poor criminals go about their carefully plotted crimes, unaware that everything they do is controlled by math. They live their lives oblivious to the fact they are at the mercy of a diabolical equation which forces their every move. In fact, I suspect some clever attorney somewhere is already preparing the “math made me do it” defense at this very moment. Soon our justice system will be forced to account for this undeniable force on our very destinies. I would go on but I can’t… must… fight… numbers…

Don Eppes (Morrow) is a decorated officer in charge of a unit of the local field office of the FBI. His brother Charlie (Krumholtz) is a math professor at CalSci. His brilliant mathematical mind is called upon to help the Feds track killers and rapists. No matter how complicated the trail gets, when the going gets rough, these guys call on Charlie. The FBI office is also manned, or womaned as the case may, be by Agent Megan Reeves (Farr), who is the profiler of the group, Agent David Sinclair (Ballard), the smart tough guy, and Agent Colby Granger (Bruno) the young upcoming agent. Charlie has Professor Larry Feinhardt (MacNicol) to guide him through his struggles. Both of the geeks are socially inept, and we are “treated” to their constant struggles to relate to others, particularly women. Why can’t they write an equation to fix that? Navi Rawat is Amita, a student of Charlie’s who remains to take a job at CalSci, possibly to remain near Charlie. Judd Hirsch is the father to the Eppes brothers. The show is produced by brothers Ridley and Tony Scott, who have had far better luck on the big screen.

Some highlights include: the return of Henry Winkler as Agent Bloom in Jack Of All Trades. Bloom’s on a personal hunt for a con artist he has been unable to bring in for years. In Charlie Don’t Surf, the brothers watch a friend die. The death is ruled an accident, but the boys don’t think so. In Arrow Of Time Don must deal with his own dark secrets after a criminal breaks out of prison looking for revenge. Guilt Trip provides a case of jury tampering. What happens when it looks like a computer is guilty of murder? You call in Charlie. Well, you can’t. You just have to watch First Law. Maybe the equations aren’t so perfect after all. Charlie messes up big time, and it almost costs him his brother in The Fifth Man. So what does Charlie do about his near fatal mistake? He goes after a serial killer. And I thought these math guys were smart. In Disturbed you’ll see how that works out for him. And look for Agent Bloom to get in everyone’s way in Greatest Hits. It’s all yours for the watching, if you’ve got the coin. Another little math problem CBS and Paramount would like to work out with you. They did that by putting the entire series together in one package. All of the show’s extras from the earlier releases show up once again. Going by the numbers, you end up with 118 episodes on a mind-blowing 31 discs.

You’re, for good reason, likely asking yourself why did he bother watching this show? I happen to have a wife who is just shy of a PhD in mathematics. Before you start sending me those condolence e-mails, it’s really not that bad. She’s actually pretty excellent and helps you guys by proofing my work for each of my 3000 plus reviews here at Upcomingdiscs.com. So if this review turns into a glowing love fest, someone did a little too much proofing. The only downside is I get to watch Numb3rs a lot, so I am about as familiar with this show as I am with the stuff I love. Lucky you. If you’re unhappy with my take on the show, remember that it wasn’t really my fault. Any good mathematician could have predicted every word. So I was compelled to write every word.

The math did finally get to the show. The math in question here deals with the percentage that writers got on internet showings and other modern methods of delivering entertainment (that number being 0). When you divide a television series by that equation, the sum is reduced by the tangent of the picket line and multiplied by the number of writers minus the number of members of the Writer’s Guild divided by the number of weeks of the strike less the episodes produced, carry the 1 and we end up with  “7,636 MISSING PERSONS. 2,260 MURDERS. 6 UNSOLVED SERIAL KILLINGS…118 EPISODES”

Gino Sassani is a member of the Southeastern Film Critic's Association (SEFCA). He is a film and television critic based in Tampa, Florida. He's also the Senior Editor here at Upcomingdiscs. Gino started reviewing films in the early 1990's as a segment of his local television show Focus. He's an award-winning recording artist for Omega Records. Gino is currently working on his 8th album Merchants & Mercenaries. Gino took over Upcomingdiscs Dec 1, 2008. He works out of a home theater he calls The Reel World. Favorite films: The Godfather, The Godfather Part II, The Body Snatcher (Val Lewton film with Karloff and Lugosi, not the pod people film), Unforgiven, Gladiator, The Lion King, Jaws, Son Of Frankenstein, The Good, The Bad And The Ugly, and Monsters, Inc.
Beauty And The Beast (2012): The Complete Series Becker: The Complete Series