Beauty And The Beast (2012): The Complete Series 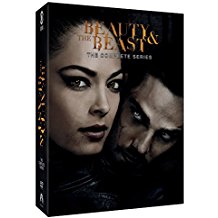 A New York city homicide detective is haunted by the night when her mother was murdered by two gunmen, who themselves were killed by a mysterious being. A decade after that night, she finds out that the mysterious being is still around. As this “Beauty” and her “Beast” finally meet, they start investigating the truth behind their secret ties to each other. The similarities between this adaptation of Beauty and the Beast and any others begins and ends at the title. Originally slated as a reboot of the 1987 series that starred Ron Perlman and Linda Hamilton, this series trades the romance and battle of misfits for crime investigations and military conspiracies.

The “Beast” of this series is one of the most troubling elements. Instead of a monster (or anything remotely beastly) we have a man who was transformed by a super soldier serum that makes him have super strength and super senses when made mad. As you can already tell, this show is really trying to be a combination of Captain America and The Incredible Hulk. When the Beast goes into mad mode, the only physical change is he gets just slightly uglier…just…slightly. For anyone who recalls the vampire transformations in the Buffy and Angel series….it’s less than that.

Kristin Kreuk makes for a good lead and performs her role well. The rest of the cast leave plenty to be desired, and the storytelling does not help. There is a war between solving each episode’s case and the overlapping mystery of the Beast that makes the show seem rather unfocused at times. This lack of consistency makes it difficult to maintain interest.

If I may be so bold, I take issue with something in this show (and others, but this show makes for a good example): frighteningly skinny characters, particularly detectives. Kreuk is certainly petite, but even more concerning is her character’s cohort, who is played by Nina Lisandrello. This person is skinny to a degree that I simply cannot believe her as a detective. It’s that Hollywood level of skinny that borders on malnourished, which I find distracting. I had the same issue with Jennifer Carpenter on Dexter. I’m not trying to make an anti-feminist rant about female detectives, and maybe I shouldn’t be speaking about such matters when trying to evaluate a television program, but I find it difficult to see these people as action-ready cops when they seem to have neither fat nor muscle on their bones. I know that this is not a new issue (don’t get me started about the unrealistic ideals it creates for young viewers) and many will wonder why this is the show I decide to attack, but it is something that both takes me out of the program and places me in a position where I’m more concerned about the well being of the actor than the character. To me, that’s a failure for both the performer and the show.

At the conclusion of Season 2, Vincent and Catherine have defeated Gabe for the second time (this time for good, hopefully), thus putting an end to the Muirfield experiments. Or so they think, as they come to learn that the world is bigger than they initially thought, being introduced to a pair of Department of Homeland Security agents (Alan Van Sprang and Natasha Henstridge), who task them with helping the DHS hunt and contain individuals who have been subjected to superhuman experiments.

On top of that mission, the couple has a few relationship issues to overcome as well as they attempt to tackle living together and eventually the altar. Can Vincent overcome the territorial side of his DNA in order to be able to happily occupy the same space as his lady love? Also complicating their lives is the reappearance of an immortal foe hinted at last season to cause the downfall of Alistair and Rebecca.

I will say this for the series: it caught me off guard. Not because of the storylines, although those did prove to hold my interest. What caught me off guard was how quickly it received confirmation that it would be renewed for a fourth season. Early renewal status is not uncommon for TV shows, correct? Heck, most of the time networks know whether not they will bring a show back within the first couple of episodes. However, let me ask you this: how often do you see a show get renewed for another season before the airing of the previous season? For me, this was first time I ever saw such an occurrence. The CW announced that Beauty and the Beast would return for a fourth season, almost a month before the airing of Season 3. Granted Season 4 was confirmed to be the final season; it is still an accomplishment, nonetheless, if you ask me.

The excitement didn’t fully kick in for me until the second half of the season with the introduction of Jason Gedrick as the immortal beast with an ageless vendetta, Liam Cullen. Gedrick portrays the villain for the season, which he is no stranger to doing. Normally I view being typecast as a bad thing. On the other hand, when you think about it, in order to be typecast you have to be doing something that makes them believe that this is your niche. Despite it being normal territory for him, Gedrick makes the role his own, displaying cunning and guile as he attempts to push Vincent past the primal line and making him more like him, in order to destroy their love, much like he did to their ancestors.

Although the show was the fine line between police procedural and fantasy, a large contributing factor to its longevity in my opinion is the chemistry between Kreuk and Ryan. They are winning together, and though there are moments where circumstances make them question being together, when push comes to shove, it’s them versus anyone who stands in their way. To be honest, I never expected it to make it out of its first season; now here we sit on the brink of Season 4, thanks to the two’s chemistry and moderately compelling storytelling, and a light infusion of comedy courtesy of J.T.

When this series initially started, I was intrigued, although it merely seemed like a filler show. However, I find that I have to eat my words, since Beauty and the Beast survived four seasons before coming to a climax with this final season. The swan song for the show had already been sung before the first episode of this season even aired, but that didn’t stop the cast or the crew from providing a suspense-filled season as well as a proper conclusion to the story.

Catherine and Vincent’s (Kristen Kruek and Jay Ryan) tale has been filled with danger and circumstances that have tried to tear them apart, usually starting the seasons apart. However, the start of the final season finds them very much together and celebrating their honeymoon. They believe the danger is behind them and Vincent’s secret is safe, courtesy of a Department of Homeland Security cover-up. Matters heat up quickly when news regarding beasts starts to hit the internet. Before long, the couple finds themselves back in the thick of things, aided by their loyal friends J.T., Tess, and Catherine’s sister, Heather.

Someone is hunting beasts, and one wrong move could lead to Vincent’s exposure, leading Cat to join the Department of Homeland Security (DHS) for their resources in order to uncover the plot, discovering that someone is trying to pick up where Muirfield left off and make more beasts. Endeavoring to find those responsible will cause Cat and Vincent to find themselves on the run again from people they once counted as allies.

So with the knowledge of this being the final season of a show that I have been in and out of for years (really into the first season, loss interest midway second season, and came back during the third season), I can say that I was thoroughly satisfied with its conclusion. Admittedly, yes, it was a bit predictable, but when you think about it, for two people who faced so many obstacles, it couldn’t have ended any other way.

Character-wise it goes without saying that the cast has really come into their own, which is quite an accomplishment given that several members originated from different CW shows. Although the show is focused on Kruek and Ryan (the beauty and the beast respectively), the supporting cast has come into their own and command just as much screen time as the leads. The breakout is definitely Austin Basis, AKA  J.T., who has undergone the most character development over the length of the series, going from socially awkward genius to a hero in his own right.

That said, never underestimate the power of a love story, and the one that has unfolded over the past four years is a good one. Granted that the past life ancestor storyline was a hard pill to swallow, it’s not hard to see why the show was brought back year after year, and this season was no exception. My favorite part is the balance of the police procedural with the science fiction. This is one of the best instances that I have ever seen it done, especially in regards to the conspiracy to make more beasts following the fall of Muirfield, all the while with Cat balancing her new position at the DHS.

So the time has come to say goodbye to the series. I can confirm that the loyal followers will be pleased with how the story ended, or least I was, as it stayed true to the principles that were established since the very beginning of the show. So I encourage the fan base to join me in honoring the end of a series which has brought several hours of entertainment in my life.

CBS gives the show a complete series release with 70 heart-pounding episodes on 20 discs. All of the extras from the show’s season sets have also been included here. The show lasted four years from 2012-2016. It was the second series to cover the famous French story.  It’s likely no secret that the release comes as Disney releases the live-action film to home video. I’m sure we haven’t seen the last of the timeless story in any medium.

Jeremy Butler is a film school graduate of the International Academy of Design and Technology. He is been writing for Upcomingdiscs since 2012; however, movies have played a big part of his life for much longer. Favorite genres include horror, science fiction/fantasy, and comedy. Favorite movies are V for Vendetta, Boondocks Saints, Kiss Kiss Bang Bang, and The Godfather.
Tuesday Round Up: June 6, 2017 Numb3rs: The Complete Series