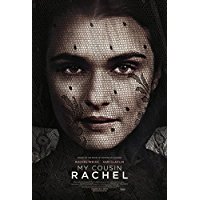 I think we can all agree that at some point we’ve all managed to make a fool of ourselves in the name of love. It’s almost a rite of passage so to speak. As for that forbidden love, well, I’m not so sure how many people will be so eager to admit to this one. When it comes to the film My Cousin Rachel, it’s a love story, but far from what you’d find on the Hallmark channel. Instead this is a film about the nightmare of what love can be and what it can do to you. Back in the 90’s, Roger Michell directed one of the sweetest and optimistic romances of that decade when he did Notting Hill.Now it’s 2017 and his return to romance could not be any more bleak, but how beautifully bleak it all is.

Philip (Sam Claflin) gets us up to speed in the film’s opening narration where he discusses becoming an orphan and being taken into custody by one of his cousins, Ambrose, a cousin who seems to have embraced the novel idea of bachelorhood. Philip manages to be raised just fine by his cousin, that is till things change and Ambrose falls ill and has to move from the English countryside to Italy, and during his recovery he meets a mysterious woman, Rachel (Rachel Weiz). His cousin continues to write Philip and tell him about his growing relationship with Rachel, till things take a turn for the worse and in the following letters his cousin goes on to believe Rachel is attempting to kill him. Concerned for Ambrose, Philip ventures off to see what has happened to his cousin, and upon his arrival he discovers that he is too late and that Ambrose is dead.

Philip wants to confront Rachel, but she is not around, so Philip is left with no choice but to wait around and seethe as he plans out his confrontation, ready to accuse her of killing his cousin. Louise Kendall (Holliday Grainger), the daughter of Philip’s godfather comes out to help Philip as he waits for Rachel to return.  It’s obvious from the start Louise is fond of Philip, but of course Philip has been raised to believe men don’t need women, so he is blind to the most obvious of advances.

By the time Philip is about to have the chance to meet Rachel and have his confrontation, we’re expecting an explosion of anger and accusations.  What we really get: from the moment Philip first lays eyes on her, he becomes a dopey-eyed idiot who is capable of making nothing but rash, foolhardy decisions. I’ve heard how love can make you blind, but how we see his character just flip so quickly is a bit much, and then as we watch his infatuation grow, you just want to start shaking your head at him.

As he approaches his 25th birthday, Philip is about to inherit his family’s fortune, and in the ultimate act of love (stupidity) he does something that you just think, where is his friend to knock some sense into him?  People may make comments, but seriously, he needed someone to shake him back to reality. But it gets worse. As Rachel seems to tease and lead Philip on, we begin to notice Philip is getting sick. Could Rachel be poisoning him?

There are moments here that have the film feeling as though we are watching a Victorian Age Hitchcock tale. While the story is shaky at best, the way we see Rachel and Louise interact with Philip is what kept me invested in the film.  The cinematography here is beautiful from start to finish, but from a technical side the trouble I had with the film was with the editing. The film feels a bit bogged down at times, and with twenty minutes trimmed I feel this could have been a smooth, romantic thriller.

Why this is getting a summer release makes no sense to me; it’s a film that will be lost in the shuffle, and this is a title that would play better in the fall, but that’s up to the studios to decide.  While the film definitely has its frustrating issues, it’s still a film I feel is worth checking out if you are looking for something that is non-summer-blockbuster feel.

Brent Lorentson is a horror writer and film critic based out of Tampa, Florida. With a BA in Digital Film, he co-wrote and co-directed Scavenger Hunt. His short stories have appeared in various horror anthologies. In 2019 his short script Fertile Blood will be a part of the anthology horror film Slumber Party. He is currently working on his first novel A Dark and Secret Place set to be released in late 2019. Favorite Films: Taxi Driver, Fight Club, I Saw the Devil, The Wild Bunch, Dawn of the Dead, A Clockwork Orange, Pulp Fiction, Heathers, The Monster Squad, and High Fidelity.
Father Dowling Mysteries: The Complete Series Tuesday Round Up: June 13, 2017