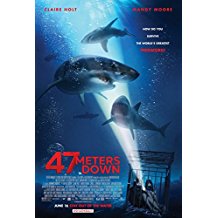 It’s summertime, and that means it is time for those bikini-clad bodies to start decorating the beaches and become bait for everyone’s favorite predator of the ocean. For those who don’t tan and manage to only burn in direct sunlight, there is a safer alternative to the beach, and that is your local theater with the new film 47 Meters Down.  Last year we had the surprise hit The Shallows that made a valiant attempt at making the beach terrifying once again. I love a fun, cheesy shark film; it’s one of those cinematic pleasantries I feel we just don’t get enough of. With the wait for Meg being another year off, it seems 47 Meters Down is going to have to tide me over till then. Is it worth taking a dip?

Lisa (Mandy Moore) and her sister Kate (Claire Holt) travel down to Mexico for a vacation.  The trip was originally supposed to be with Lisa and her boyfriend, though we find out early on that he broke up with her not long before the trip, and Kate was a quick backup guest. Though I had a hard time believing the pair are sisters, they could be best friends, and it would really do nothing to change the plot.  We know these young women are simply soon to be bait for the sharks, and that’s what matters in these kinds of films.

It seems the motivation Kate decides to use to get Lisa out of her hotel room is to bait her sister with propositions that begin with “A boring person wouldn’t do…” and this in turn would motivate Lisa to do just about anything.  If anything this film should remind viewers that boring isn’t so bad; in fact, boring might actually keep you out of the belly of a great white shark.

While the girls are out having drinks they meet a pair of young natives who suggest they go shark diving, promising that it’ll be an experience they won’t forget. Despite Lisa knowing how bad an idea this is, she still caves after her sister’s protests and insisting it’s something that could change how her ex views her.  The bad decisions only continue the next morning when they see the rusty cage that they are expected to climb into.

Up to this point, though the cinematography is beautiful because of the location, the overall feel of the film seemed more sci-fi movie of the week.  The attempt to get us invested in the characters is there, but it’s only there in a manner to serve the plot and get them into the water, rather than having us actually care about what will happen to these women. This is why Jaws will forever be the classic and so many films will fail. The Shallows was smart and kept the focus on the character and her drive to survive. 47 Meters Down cares about one thing: getting those bodies into the water and dangling them as bait for the finned stars of the film to do their thing.

When the girls get into the cage, everything starts out fine till the winch snaps and the girls plummet to the ocean floor with sharks circling overhead. It’s a terrifying situation to be in, especially as the girls begin to realize no one else knows where they are and what could happen if the men on the boat simply decide to leave. As the oxygen in their tanks quickly depletes, the need for them to manage to find a way to survive becomes a priority.

Inside the cage as the sisters troubleshoot their plans of survival is a mixture between the film’s strength and its weakness.  The urgency and the suspense that is built by staying with the sisters is what keeps us engaged, but some of the decisions they make are simply the kind that will have you smack your head, and at times even caused the audience to laugh (never a good thing).

CGI has come a long way, but for me there is nothing more terrifying than seeing those yellow barrels in Jaws approaching the Orca in Jaws. I understand audiences want to see the beasts that are circling the girls, but there is something to the notion of less is more.  There is one nice jump scare in the film that has fun with the notion of the dark water and what could be lurking out there.  More of this could have gone a long way with this film. Unfortunately the film only gets clever in the final act.

While I don’t believe the film will find the same success that The Shallows did last year, 47 Meters Down is still one of those guilty pleasures that is fun but not all that memorable.  If you are looking for an escape from the sun and the heat, this is a fun 90-minute escape, but if you are looking for a more substantial film experience, you may want to wade elsewhere.

Brent Lorentson is a horror writer and film critic based out of Tampa, Florida. With a BA in Digital Film, he co-wrote and co-directed Scavenger Hunt. His short stories have appeared in various horror anthologies. In 2019 his short script Fertile Blood will be a part of the anthology horror film Slumber Party. He is currently working on his first novel A Dark and Secret Place set to be released in late 2019. Favorite Films: Taxi Driver, Fight Club, I Saw the Devil, The Wild Bunch, Dawn of the Dead, A Clockwork Orange, Pulp Fiction, Heathers, The Monster Squad, and High Fidelity.
Kill ’em All (Blu-ray) Cars 3