Posted in: Disc Reviews by Brent Lorentson on June 16th, 2017 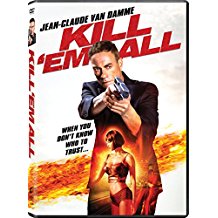 It used to be when you had a straight-to-DVD release, you knew better than to set the bar too high.  From time to time you would find that occasional gem that slipped through the cracks and turned out to be something awesome, but this was a rare occurrence. With the way films are released now, the talent you are seeing in straight-to-DVD releases has improved, as have the budgets, since getting a film on the big screen has become a greater financial challenge.  I mention this only because I look at a title like Kill’em All and wonder if they even cared. The actors are here and doing their job, but it’s the figures behind the scenes that I’m calling out here.  Is this simply a cash grab to exploit the fans of Van Damme, or did they believe they had something special on their hands? I’m a fan of Van Damme, and seeing that this is a film directed by Peter Malota a stuntman from Van Damme’s heyday (Double Impact and Universal Soldier), you just kind of hope for better action, but sadly this all seemed so lazy.

Suzanne (Autumn Reeser) is a nurse who has managed to survive a massive shootout that occurred at her hospital.  She’s the only witness that the FBI has to what went down. Peter Stormare and Maria Conchita Alonso play the pair of agents who are interrogating Suzanne in a very over-the-top good cop/bad cop sort of manner. If the interviewing skills by the agents aren’t enough to make you groan, the tough-guy banter Suzanne gives the agents is beyond frustrating, since every answer she gives is heavy with the sarcasm. Stormare is better than this; he can be menacing and be a threat on screen, but here his character is so over-the-top it’s hard to believe he would pass a character profile check to be an agent.

As for the big bad shootout that occurs in the hospital, well, things start off with promise, but it never seems to take off from there. Philip (Jean-Claude Van Damme) is a security officer who is brought in after an assassination attempt goes wrong. Was Philip the shooter, or was he really working protection? These are the things the writers attempt to add some mystery and suspense.  As a gang arrives to the hospital, they arrive to finish the job, and that means to also kill Philip. What ensues is a cat-and-mouse game as Philip attempts to protect Suzanne from the assassins as the pair attempt to escape the hospital.

I understand Van Damme is getting up there, but the fights we have here are just so flat and boring. Van Damme still can do some high spin kicks and move fairly quickly, but from what we’re used to seeing from him, this is just sad.  To make matters worse, we see the kills repeated and slowed down in B&W, and it’s just hard to believe this man is the international badass that the FBI has hyped him to be.  Things only get worse when the film attempts to be clever and lead the audience to believe there is something more going on with the plot, something that reeks so heavily of ripping off The Usual Suspects that it induces an eye-roll.

While I’m not about to say Jean-Claude Van Damme churns out great films, JCVD was for me was a great film that had me hoping we’d see a change in his career. Kill’em All is simply a film that I wish I never saw, as it shows one of my favorite action heroes from the 90’s is not as immortal as his onscreen persona once evoked.  Is this the worst film I’ve ever seen? Not by a long shot, but it’s a film that will be depressing for fans to see how far he seems to have fallen.

Kill’em All is presented in the aspect ratio 2.40:1.  The 1080p image is arrived at with an AVC MPEG-2 codec at an average of 24 mbps.  The detailed and clear image is not a friend to JCVD in this film.  We see every scar and wrinkle in his haggard face, and he is looking rough. Camera effects that have been added in post just seem cartoonish and feel unnecessary. While there is some nice separation in the black and white levels, the overall color palette of the film is a bit flat.

The DTS- HD Master Audio 5.1 track is a heavy hitter; the punches and impacts sound great in each of the fight scenes. The dialog comes through clearly.  The sound mix is nicely balanced and is definitely the more impressive part of the experience, though it definitely had me hoping for more from the overall film.

Despite having Van Damme and Stormare, this film is lacking the punch I would have hoped for, despite this being a direct-to-DVD release.  Action fans, I know it’ll be hard to resist a new film by JCVD, but go in with some lowered expectations. I’m not ready to see Van Damme hang up the action films. I just think it’s time we see him adapt better to his age and ability.  Seeing a more subtle yet badass Van Damme can be a great thing. He still is a presence on screen to appreciate; right now he just needs to find the projects that suit him better.

Brent Lorentson is a horror writer and film critic based out of Tampa, Florida. With a BA in Digital Film, he co-wrote and co-directed Scavenger Hunt. His short stories have appeared in various horror anthologies. In 2019 his short script Fertile Blood will be a part of the anthology horror film Slumber Party. He is currently working on his first novel A Dark and Secret Place set to be released in late 2019. Favorite Films: Taxi Driver, Fight Club, I Saw the Devil, The Wild Bunch, Dawn of the Dead, A Clockwork Orange, Pulp Fiction, Heathers, The Monster Squad, and High Fidelity.
The Young Pope (Blu-ray) 47 Meters Down