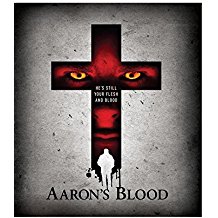 When it comes to vampire films, I’m not so much a fan of the romanticized fantasy depiction that we see in Ann Rice novels.  Personally, I like my monsters to be grounded in reality; films like Near Dark and Let Me In seem to have a more vicious bite to them. Why do I prefer these darker and more grim depictions? Well, I believe if vampires have had to kill to survive, whether it be for a month or generations, they should be handled as some scary bad guys, not pretty, sparkly, cuddle-bunnies.  When an indie film comes along like Aaron’s Blood and it decides to go the more ground with reality horror route, it gives me hope, and it’s something I’m actually looking forward to seeing. But does the film deliver the goods?

Aaron’s Blood isn’t really about Aaron’s blood in a literal sense, but instead it is about his son Tate (Trevor Stovall), a young boy who happens to be a hemophiliac. Aaron (James Martinez) is the dutiful single father who is struggling to take care of his son after the pair lose their wife/mother nearly a year before. At school Tate seems to be the target of violence from the school bully. It’s one of their interactions that sends Tate to the hospital, and by the time Aaron arrives to see his son, he’s already been moved to the ICU.  Following a chance meeting with a priest, Tate seems to be making a recovery, but we quickly see he’s making a transition into something else.

Where the film completely lost me is how all the characters seem to react to what is going on.  I’m fine with Aaron being only slightly concerned over his child’s loss of appetite and even vomiting food when Tate does try to eat.  What I can’t get past is his reaction to seeing an old man standing over his sleeping son with an axe to his throat?  He just asks him to leave?! Oh, and the insanity gets worse, when a second old man comes in to disarm Aaron and we suddenly see Tate fly across the room, and he just dives in and starts feeding on the intruder.  No one seems to react as if anything is wrong with this situation. It’s from this point on people just seem to react in ways that will just have you smacking your head and wondering what is wrong with these people.

All the momentum the film had going for it just simply seemed to crumble as the film went on.  There was so much promise in the concept of the film that it frustrates me to see it unravel as it does.

What I will give the film credit on are the simple effects used.  Simple may seem like a bad word, but here when the makeup effects or the flame effects are used, it actually makes an impact in the scene.  This is effective low-budget filmmaking that works and carries the film past its many logistical issues.

The film is a very lean 80 minutes and manages to not overstay its welcome.  Is this the next cult sensation? No, but it’s at least an entertaining and original attempt at a sub-genre that is always in need of a fresh injection of originality. While it’s far from being a must-see, for those horror fans who are fans of the fanged creatures of the night, this will be something to Netflix and chill to with a nice bloody Mary.

Brent Lorentson is a horror writer and film critic based out of Tampa, Florida. With a BA in Digital Film, he co-wrote and co-directed Scavenger Hunt. His short stories have appeared in various horror anthologies. In 2019 his short script Fertile Blood will be a part of the anthology horror film Slumber Party. He is currently working on his first novel A Dark and Secret Place set to be released in late 2019. Favorite Films: Taxi Driver, Fight Club, I Saw the Devil, The Wild Bunch, Dawn of the Dead, A Clockwork Orange, Pulp Fiction, Heathers, The Monster Squad, and High Fidelity.
Tuesday Round Up: June 20, 2017 South Park: The Complete Twentieth Season (Blu-ray)