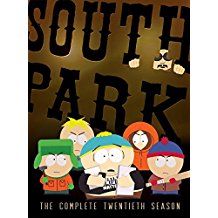 After 20 years or more, they really do feel like friends. I’ve known Cartman, Stan, Kyle, and Kenny longer than most real people in my life. Only the Simpsons have been around longer these days. Over those years, South Park has always been a series of stories that rarely connect with each other in any significant way. There have been multi-part episodes, and certain experiences have come back up over the years. Still, we’re talking about a universe where killing Kenny had become a running joke and happened pretty much in every episode. Those days are gone, and it’s been a while since Kenny met his demise, and now South Park has joined the ranks of the continuing story season. It started a bit last season and has now grown into a full-season story arc with continuing threads from Season 19. I do believe that’s one of the signs of the Apocalypse. I’m just sayin’.

This season is so different that I feel I have to break away from my own traditional South Park review format of providing you with The Good, The Bad & The Ugly. Certainly there are still episodes that fit each category. But times have changed, and I guess these reviews must change with them. That said, prepare for a pretty much standard kind of review for South Park The Complete 20th Season.

The season kicks off with a National Anthem protest by the South Park Elementary girl’s volleyball team. But it’s not to protest the kinds of things a now currently unemployed NFL quarterback was talking about. They were protesting the existence of an internet troll named Skankhunt47. Of course everyone thinks it’s Cartman, and a war breaks out between the boys and the girls with folks having to pick a side. Meanwhile, the town has gotten hooked on a sentient fruit named ‘Member Berries. They’re hooked on nostalgia, particularly moments of Star Wars. But these berries have an agenda of their own, which will become apparent throughout the season. So how do we end the war? Get JJ Abrams to reboot the National Anthem. That’s not going to work.

After a Danish celebrity kills herself over Skankhunt47, the Danish government sets out to develop Troll Hunter, which will make anyone’s browser history available to anyone else. The resulting panic leads to potential global war. Meanwhile, Garrison is doing everything he can to tank his presidential campaign, but Clinton can’t get out of her own way. The usual mayhem ensues, and South Park’s experiment in a single story ends more in a whimper than a bang.

“Maybe this is the new post-funny era of satire.”

That’s what it feels like. Never has South Park felt so ordinary. The characters don’t live up to expectations, and we hardly get to see Kenny or other characters at all. Cartman has definitely lost his edge, perhaps the result of being used as an all-too-obvious red herring this season. It’s bad when even Trey and Matt are as unenthusiastic as I’ve ever heard them when they describe a season they want very much to put behind them. You’ll find them in the commentary being about as down on a season as ever, telling us they’d much rather skip to season 21 and forget this one ever happened. I’m with those guys.

The Dolby Digital TrueHD 5.1 track is perfect. There’s some high-flying music and wonderfully immersive ambient sounds. Otherwise, the audio differs mostly in the greater range of dynamics to the sound to the DVD.

Season Commentary: (19:38) The duo change the way they deliver commentary this season. Instead of a five-minute mini-commentary on each episode, they do a longer one to clips of the season. It’s a separate feature that doesn’t run during any of the episodes.

It’s not that there aren’t some golden moments in the season. Bill Clinton’s Gentlemen’s Club is a riot and was obviously there because the team was sure Hillary would win the election. They admit some rewriting had to be done. But Bill & Bill (Clinton and Cosby) is the best gag on the season and would have been longer had things ended differently on election night. Great. Another thing to blame on Trump. The idea of our internet life being our “life” is also a spot-on South Park golden idea. But the single-story format left many of these ideas underdeveloped. I hope the experiment is over and I can have my South Park back. “Yeah, I ‘member.”

Gino Sassani is a member of the Southeastern Film Critic's Association (SEFCA). He is a film and television critic based in Tampa, Florida. He's also the Senior Editor here at Upcomingdiscs. Gino started reviewing films in the early 1990's as a segment of his local television show Focus. He's an award-winning recording artist for Omega Records. Gino is currently working on his 8th album Merchants & Mercenaries. Gino took over Upcomingdiscs Dec 1, 2008. He works out of a home theater he calls The Reel World. Favorite films: The Godfather, The Godfather Part II, The Body Snatcher (Val Lewton film with Karloff and Lugosi, not the pod people film), Unforgiven, Gladiator, The Lion King, Jaws, Son Of Frankenstein, The Good, The Bad And The Ugly, and Monsters, Inc.
Aaron’s Blood A United Kingdom (Blu-ray)