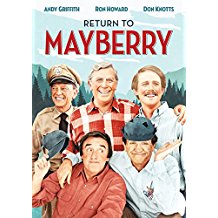 If there is a television series in the history of the industry as American or timeless as The Andy Griffith Show, I haven’t seen it. You’d be hard-pressed to find someone with strong negative feelings about the series. It was one of those organic and comfortable productions that reached deep into the core of rural America. Even if we lived in a bustling city, there were aspects of the show that still rang true. It was populated with the kind of familiar faces so that it wasn’t hard for anyone in the audience to smile in remembrance of a character they’ve known in real life. And even after 50 years, the series still speaks to that certain aspect of the friendly small southern town. A lot of the credit for that peaceful easy feeling must be credited to the titular star Andy Griffith himself.

It all started as an episode of The Danny Thomas Show called Danny Meets Andy Griffith in February of 1960. In October of that same year, the first episode of the show ran. That was the first time television audiences took a trip down to Mayberry. There they met Andy Taylor (Griffith), a widower with a young son named Opie, played by future Happy Days star and superstar director Ron (it was Ronnie then) Howard. The relationship could be summed up in the popular series opening that found the father and son heading to their favorite fishing hole with poles slung on their shoulders. All the while, the soon-to-be-famous whistled theme put us in just the right mood. Andy was helped out at the house by Aunt Bea (Bavier), who always had something “mighty fine” cooking or baking in the oven.

In 1986 Andy Griffith teamed up with Dean Hargrove to deliver Griffith’s biggest television hit since The Andy Griffith Show. Griffith would play Matlock, the southern charming lawyer who was unbeatable in a courtroom. That same year Hargrove would help Griffith and some of his old buddies Return To Mayberry. The reunion television film would bring back pretty much all of the surviving members of the original comedy classic series. Of course Frances Bavier, who played the matriarch Aunt Bee was too ill to participate, but a tender homage to the character is included in the film.

Ron, no longer Ronnie Howard is back as Opie, who now has a wife of his own and is expecting his first son. So Andy is returning after 20 years to celebrate the birth of his grandson. He’s also planning to move back and run to get his old job as sheriff back. But there’s a complication. He decides not to run when he learns that Barney Fife (Knotts) is running for the job he’s been doing since the last sheriff passed away. Also returning are garage owners Gomer and Goober Pyle, played once again by Jim Nabors and George Lindsey respectively. Betty Lynn returns as Barney’s old flame Thelma Lou. Hal smith returns to play Otis, who has been sober and runs the local ice cream truck. Jack Dodson is back as Mayberry official Howard. Even Helen returns for a short time, played by Aneta Corsaut.

Barney’s run is in jeopardy when local businessman Wally Butler (Lineback) fakes a sea monster in the town lake to bring tourists. Of course, Andy helps the bumbling buddy save face and keep him from getting in his own way. The chemistry is still there, and Don Knotts continues to shine even after all of those years.

There’s plenty of nostalgia here, and it’s kind of nice the way these characters appear to have continued on over the years. Yeah, the story is rather contrived, and there’s a lot of dated humor, but it’s pretty much the way the television show always was.

Who doesn’t have a soft spot in their heart, if not their DVD collection, for The Andy Griffith Show? The denizens of Mayberry have been with many of us our entire lives. For most of America, The Andy Griffith Show has become the template for any small rural town. The characters stand as prerequisite citizens in any said town. The town drunk, the local barber, the motherly little old lady, and the corner mechanic all look like Otis, Floyd, Aunt Bee, and Goober to most of us now. Griffith himself brought fine qualities to his role of Sheriff Andy Taylor, but it was Don Knotts as the incompetent but lovable deputy Barney Fife who stole the show. And who was that sweet little boy? He grew up to be a first class filmmaker with plenty of Oscars on the shelf. No question that The Andy Griffith Show started something back in 1960. In the 1980’s we all went back. “Surprise, Surprise, Surprise.”

Gino Sassani is a member of the Southeastern Film Critic's Association (SEFCA). He is a film and television critic based in Tampa, Florida. He's also the Senior Editor here at Upcomingdiscs. Gino started reviewing films in the early 1990's as a segment of his local television show Focus. He's an award-winning recording artist for Omega Records. Gino is currently working on his 8th album Merchants & Mercenaries. Gino took over Upcomingdiscs Dec 1, 2008. He works out of a home theater he calls The Reel World. Favorite films: The Godfather, The Godfather Part II, The Body Snatcher (Val Lewton film with Karloff and Lugosi, not the pod people film), Unforgiven, Gladiator, The Lion King, Jaws, Son Of Frankenstein, The Good, The Bad And The Ugly, and Monsters, Inc.
John Wick: Chapter 2 (UHD Blu-ray) (4K) Life of Significant Soil