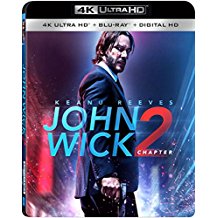 Keanu Reeves has enjoyed somewhat of a career renaissance thanks in no small part to the success of John Wick in 2014. There he teamed up with some stunt friends of his going back to The Matrix, and together they brought a new action hero to the screen that was as much graphic novel as it was action film. It would become the directing debut of the stunt team of Stahelski and David Leitch. Along with their action star, everyone stuck to what they knew and refused to overcomplicate the whole thing. That led to a box office haul of $86 million worldwide and a respectful enough budget to make a sequel seem like a good possibility. It took three years, but that possibility has turned into John Wick: Chapter 2.

The first couple of minutes work as closure for the first film as Wick gets his car back. It gives you that quick introduction of the character and a reminder of what he can do and the legendary reputation he has earned. A few of the first film’s beats are reproduced here strictly for nostalgia. That includes a pretty nice performance by Peter Stormare as another Russian mobster family member of last film’s kid. He gets to deliver the quiet warning about Wick, and there are some pretty sweet cuts to his facial expressions while he listens to the carnage of Wick taking out his thugs. It’s a wonderful chance for the filmmakers to wink at the audience and remind us that we’re all in it for the fun of it all. A couple of hundred dead bad guys later we get to the sequel’s real story.

John Wick has been trying to retire to the quiet life. To do that he had given a marker to Santino D’Antonio (Scamarcio). Now Santino wants to cash in the marker, and the rules of the organization require Wick to honor the promise. Of course, Wick attempts to turn the job down, which leads to disastrous results to his life. Reluctant though he might be, he takes on the marker. Santino wants his sister’s seat at an international “board of directors” of sorts. He wants Wick to travel to Rome and take her out, which isn’t going to be easy, because she’s protected by folks just like him, including rival hitman Cassian, played by Common. Then there’s the problem that Santino has to avenge his sister’s death, for appearances, naturally. Suddenly there’s a $7 million contract on his head, and every assassin in the world is looking to collect. He ends up violating the rules to get his revenge and ends the movie on the outs and a hunted man. You knew they were going to set up Chapter 3, didn’t you?

There’s little question that Reeves has learned to step up his acting game here just enough to allow for a few emotional beats in the story. He’s in no danger of setting the awards community on fire, but he’s pretty much the perfect guy for this film. Wick is dangerous because he can be singly focused and more of an automoton than a human being. The action occurs at breakneck speed with Wick moving from one kill to another, all with laser-sharp focus on the endgame. This is pretty much like watching a video game character. The kills happen with quick precision, and each of Wick’s rampages is another level leading to some boss level that doesn’t really come in this film. I suspect there are a few other levels to play before we get there. There’s very little dialog here, and most of the supporting cast is really there to round out the background. There are exceptions, of course. The filmmakers actually played it smart by casting a pretty weak actor to play the lead bad guy. This isn’t any Bond larger-than-life arch-nemesis. He’s a weak character crafted carefully to avoid anything or anyone drawing attention to Reeves as a somewhat flawed performer. He’s a one-trick dog and pony show, but this happens to be that one trick.

Lance Reddick returns as the hotel service specialist Caron, and Ian McShane gets an expanded role as Winston this time. The sweet supporting role isn’t a crucial moment of the film. It’s a character named the Bowery King, who is far more flash than substance. He’s merely a way for Wick to get from point D to point E. He could very well be a complete throwaway if it were not for the fact he’s played by Laurence Fishburne, and the reunion of these two Matrix leads is a little bit emotional in a film-nostalgia kind of way. It’s a grand gesture to provide some candy for the fans. It’s just another example of Reeves and company winking at the audience. And we don’t mind at all.

John Wick: Chapter 2 is presented in its original aspect ratio of 2.40:1. The ultra-high-definition  image is arrived at by an HEVC codec with an average bitrate of 70 mbps. The rate exceeds 100 mbps. John Wick’s world is highly stylized, and this ultra high definition will allow you to fully experience that world. There’s a great deal of depth and detail here that excels in the wonderful Rome locations. A lot of the color has been softened to accommodate that stylization. It’s a dark world that gets a huge boost from wonderful black levels that deliver textured shadow definition. There’s also pretty solid contrast for those bright places like the subway’s white walls against the dark images that play rather starkly in those scenes. While not exactly realistic, the image uses its own language that works well with the added sharpness and detail of a 4K image presentation.

The Dolby Atmos presentation defaults to an aggressive 7.1 track. You will be fully immersed in this active sound field. If it’s not rapid gunfire that sends bullets whizzing by your seat, it’s the rev of car engines and the shattering sounds of metal on metal. The subs help to build the depth that gives a great amount of weight to even the fisticuff fighting. Dialog punches through even with Wick’s soft delivery. The true achievement is the careful balance that brings it all to you without a jumble of noise. Everything cuts through in this superior mix.

There is an Audio Commentary with Keanu Reeves and Chad Stahelski. They spread a lot of love around for everyone, and you can tell they are still stoked about the action sequences.

Deleted Scenes: (8:05)  There are three with a play-all option. The scenes are framed in all of the camera code information.

Retro Wick – Exploring The Unexpected Success Of John Wick: (4:34) Cast and crew talk about the elements of the first film that appealed to audiences. There are plenty of clips from both films, and the talk shifts to the new movie.

Training John Wick: (12:00) Here’s a look at the training that Reeves went through between the films and then specifically for what he would be doing in Chapter 2. There’s plenty of training and choreography footage here.

Wick-Vizzed: (5:13) This feature looks at how pre-viz helped with the stunt choreography. It’s not the kind of crude animation pre-viz you might be used to. Here’s it’s almost like an animated football coach’s board with moving X’s and O’s.

Friends, Confidants – The Keanu/Chad Partnership: (9:54) A bit of a mutual admiration society between actor and director. Plenty of anecdotes that go back to the two first working together on The Matrix films.

As Above, So Below – The Underworld Of John Wick: (5:06) This feature looks at the rules and style of the underworld organization that John Wick and the John Wick universe are so much a part of. There’s also attention here to the Roman locations. Producer Basil Wanyk tells us that Rome has been around for a thousand years. Check that, Basil. Try over two thousand years.

Chamber Check – Evolution Of A Fight Scene: (10:08) More choreography and too much of a promo for Eighty-Seven Eleven, the stunt company that provides the stunts and started by the director. We get it. They’re really good.

A Museum Tour With Sir Jonathan Wick: (2:11) An Italian guide shows us the museum pieces used in the film while intercut with the action scenes that took place in those areas.

Kill Count: (3:09) This is a video-game-like scorecard of Wick’s kills in the film.

Gino Sassani is a member of the Southeastern Film Critic's Association (SEFCA). He is a film and television critic based in Tampa, Florida. He's also the Senior Editor here at Upcomingdiscs. Gino started reviewing films in the early 1990's as a segment of his local television show Focus. He's an award-winning recording artist for Omega Records. Gino is currently working on his 8th album Merchants & Mercenaries. Gino took over Upcomingdiscs Dec 1, 2008. He works out of a home theater he calls The Reel World. Favorite films: The Godfather, The Godfather Part II, The Body Snatcher (Val Lewton film with Karloff and Lugosi, not the pod people film), Unforgiven, Gladiator, The Lion King, Jaws, Son Of Frankenstein, The Good, The Bad And The Ugly, and Monsters, Inc.
Transformers: The Last Knight The Andy Griffith Show: Return to Mayberry