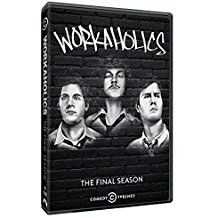 Since 2011, the trio of Blake, Adam, and Ders have been reporting to their telemarketing job and bringing the laughs to Comedy Central on Workaholics.  With the final season now released, it’s time to bid a fond farewell to the trio that has shown us the joys of pranking, slacking, and pot in the work place. Does the show go out with a bang, or does it fizzle before reaching that last episode? I was a little concerned how things would end up because of the years I’ve gotten to really like the show and everyone involved. It’s time to punch in that time card and check out what this final season is all about.

The final season kicks off with Blake (Blake Anderson), Adam (Adam Devine), and Anders (Anders Holm) coming into work as new trainees are being brought into the office. The guys crash the training session and decide to tell everyone they are fired, with the exception of the three youngest trainees and one old man they affectionately name sixty-nine.  The guys take the new employees under their wing and show them a day in their life at the office, and this ends up backfiring on them. The new trainees take pranks to a whole other level, and it becomes an all-out prank war in the workplace.  I loved this episode, but what I wasn’t expecting is how much more I was going to love this season.

The second episode is personally the funniest one in my opinion. The office gets a new product that they need to sell, but no one wants to buy it, that is until the guys are caught in the middle of a drug deal on the phone and things get way out of hand.  There’s a nice cameo in this one by an almost unrecognizable Topher Grace; really wish we could see more of this guy.

While the final season is ten episodes, I wouldn’t go so far as to say the season is without its flaws.  There is a Bill-centric episode, where we see Bill (Billy Stevenson) isn’t simply the weird employee at the office, but that he has a secret life on the side as a transporter as a side hustle. It starts out strong but starts to drag at points, but thankfully the episode comes together at the end. Another themed episode has the guys on a bad MTV-like dating show where they all fight for the affection of one not-so-lucky lady. What had me hooked with this episode is how spot-on they were with nailing these old-school dating shows from MTV; it could actually be one of the lost episodes.

What is disappointing, though, is the final episode, where the guys become celebrity partiers.  There is a lot going on in the episode, to the point that time could have been spent putting some of these ideas in other episodes or even stretching this season out another episode.  The show always managed to have heart, even if it was cleverly disguised in humor, but at its core the show is a bromance of sorts about their loyalty to each other. So to see the guys go through so many changes in one episode, while in a way making their own statement on celebrity and branding, I wish this had a chance to go a bit deeper than it did.

When it comes down to it, the final season does close the door on the show, and in the final shot I feel it ties things up nicely.  Now I’m curious to see what is next for all the guys involved with the show.  With television in a revival age, perhaps the door isn’t closed for good with the show, but the core three are a trio of some really talented guys who can bring a lot to the comedy table; here’s to looking forward to what is next.

Brent Lorentson is a horror writer and film critic based out of Tampa, Florida. With a BA in Digital Film, he co-wrote and co-directed Scavenger Hunt. His short stories have appeared in various horror anthologies. In 2019 his short script Fertile Blood will be a part of the anthology horror film Slumber Party. He is currently working on his first novel A Dark and Secret Place set to be released in late 2019. Favorite Films: Taxi Driver, Fight Club, I Saw the Devil, The Wild Bunch, Dawn of the Dead, A Clockwork Orange, Pulp Fiction, Heathers, The Monster Squad, and High Fidelity.
Life of Significant Soil Car Wash