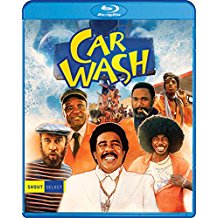 Another shining example of an opportunity to watch a classic film that was before my time.  Before had, the only thing I knew about Car Wash was that it was a Richard Pryor movie; however, now I grasp that Pryor is just a pawn in a large ensemble cast. He is far from the most important character, although he is an interesting one as Daddy Rich, but his role pales in comparison of Bill Duke as Duane, or should I said Abdullah, as he prefers to be known now.  Car Wash as it turns out is of greater significance than I originally realized and worthy of the title of cult classic, and I do believe a huge portion of that is attributed to the song that was lived on for generation to follow. You all know it, “Working at the Car Wash.” Sing it with me now.

So a majority of the film revolves around Abdullah (Bill Duke), who is considered a Muslim revolutionary. Abdullah also serves a bit of the everyman for the story and our eyes into this world. This is most evident during the ending, where the character reaches his emotional peak while attempting to rob the establishment. In that scene, we see all the emotional difficulty that he has struggled with throughout the duration of the film. Another key takeaway from the scene is the understanding that we all just need a helping hand or someone one to show that they are in corner sometimes.

Though the focal point, Abdullah is not the only interesting character of the bunch. As I said earlier, Pryor does make his presence known as a minister preaching the benefits of monetary gain to the extent that like another character, it was near impossible to differentiate him from a pimp. Even better is the supposed pop bottle bomber, especially after they catch the would-be suspect or so they think; you aren’t gonna believe what was actually in the bottle. There are also a few familiar faces that I recognized from later projects, such as Garrett Morris (Jamie Foxx Show and more recently 2 Broke Girls) and Danny DeVito, who of course needs no introduction.

Though a generational gap does exist between me and this film (the movie was released in 1976), I think the key points do bridge the gap, and address matters that still plague society today, including transgender issues. However, I did enjoy Lindy’s comeback to Abdullah when he was criticizing her: “I’m more man than you’ll ever be and more woman than you’ll ever get”. However, let us not forget that this movie is a comedy, and a pretty good one at that. I mean, there aren’t many films out there can show us the dangers of marijuana in a comedic way such as a human car wash. Also there is a bit of an underdog story in the form of TC’s pursuit of Mona.

In conclusion, Car Wash is a worthwhile experience that time does not dampen. You will definitely laugh while observing the banter between the characters. You will also be moved by the some of the larger issues that are addressed as well; if you aren’t moved by Lonnie and Abdullah’s final scene together, you are dead inside. Needless to say, I will be watching this film again, and soon. I believe that is an experience that should be shared with the family, albeit possibly not with the young ones as there is some profanity; you can consider that your disclaimer.

Jeremy Butler is a film school graduate of the International Academy of Design and Technology. He is been writing for Upcomingdiscs since 2012; however, movies have played a big part of his life for much longer. Favorite genres include horror, science fiction/fantasy, and comedy. Favorite movies are V for Vendetta, Boondocks Saints, Kiss Kiss Bang Bang, and The Godfather.
Workaholics: The Final Season Tuesday Round Up: June 27, 2017