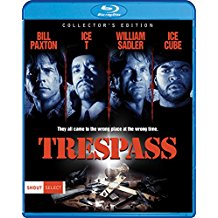 When it comes to Writer, Director, Producer, Walter Hill is simply one of the best at doing the traditional tough-guy movies.  Films like The Warriors and 48 Hours are simply staples of my childhood; he even was involved with Alien, which I believe is one of the best sci-fi/horror films ever made, yet his star has seemed to fade as the years have passed. His work on the underappreciated Bullet to the Head I felt was a nice throwback to the features he made back in his heyday and had me realize how much his voice is missed in today’s cinema. This week, Shout Factory rolls out a blast from the past with the 1992 film Trespass. I remember this title from my days where I would visit my mom-and-pop video store and just consume all the movies I could, and Trespass was one of those guilty treasures that I just enjoyed the hell out of when everyone else seemed to just ignore it.  Does the film hold up over the years? You bet it does.

Vince (Bill Paxton) and Don (William Sadler) are a pair of firemen who discover a treasure map while fighting a fire. With a little digging they discover that the map is to a “treasure”, gold that was stolen decades earlier and then hidden and never recovered. The pair decides to travel to St. Louis and check out the location of this gold and hopefully claim it as their own.

In a scene that opens with a VHS recording of a deal gone bad and a murder, King James (Ice-T) sets up a meeting with the shooter. Along for the ride is the rest of his crew with Savon (Ice Cube) as his second in command.  The meeting is set to go down at an abandoned tenement run by King James; that just so happens to be where Vince and Don are heading to collect their gold.

While searching for the gold, Vince witnesses the death of one of the gang members and is seen.  Vince and Don have little choice but to take one of the gang members hostage and hole themselves off in a room where a long, violent standoff takes place. The setup is relatively simple and very much feels like an urban western as King James seems to circle the wagons by calling in all the violent hoods he knows to box Vince and Don in till they are either dead or surrender his brother Lucky who they took hostage.

Even with the familiar formula, it’s the impressive script by Bob Gale and Robert Zemeckis that keeps the story moving and feeling fresh. (Just to side-track for a moment here, how is it that film written by the creators of Back to the Future and directed by Walter Hill, seriously, how was this not a box office smash, because the movie is non-stop fun.) What’s even more impressive is there really are no clear-cut good guys or bad guys in the sense that everyone here seems to have a shady agenda, but you understand why everyone seems to compromising their morals.  King James even has a brief moment explaining how he had no choice but to become what he is out of survival but also because of the influence of society on him with few to no other options.  Doesn’t mean he’s right, but when he says it, it is with the conviction that he really believes this.  Even more to lean on King James’s side is that all he wants is to get his brother back safely from the white guys who took him.  As for the firemen, they know what they are doing is wrong and even reach a point where murder and kidnapping is an option when it means keeping their gold.  It’s these compromised morals that really help ground this story and make it difficult to decide who to root for, especially when everyone seems willing to betray the other.

The tough talk, the gunfights, the great cast — all of this comes together to make a film that is simply a fun ride.  At the time I know it would have seemed innovative by incorporating the VHS into the film, but how it seems to stretch on beyond the opening scene and throughout the film seems a bit much and honestly is my only mini-gripe with the film, because it does pull you out of the action without furthering the story.

As for who ends up with the gold, that’s for you to watch and find out, and hopefully like me you’ll have a big grin on your face all the way through the credits.

With a collection of interviews with William Sadler and the producers as well as some featurettes that offer insights into the stunts and weapons in the film, Shout Factory has put together a quality Blu-ray that fans can appreciate as well as hopefully making new fans in the process.

Brent Lorentson is a horror writer and film critic based out of Tampa, Florida. With a BA in Digital Film, he co-wrote and co-directed Scavenger Hunt. His short stories have appeared in various horror anthologies. In 2019 his short script Fertile Blood will be a part of the anthology horror film Slumber Party. He is currently working on his first novel A Dark and Secret Place set to be released in late 2019. Favorite Films: Taxi Driver, Fight Club, I Saw the Devil, The Wild Bunch, Dawn of the Dead, A Clockwork Orange, Pulp Fiction, Heathers, The Monster Squad, and High Fidelity.
Bones Season 12 The Unholy (Blu-ray)