Posted in: Disc Reviews by Brent Lorentson on June 30th, 2017 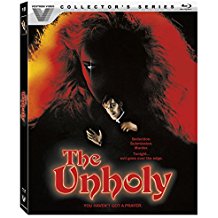 From the vaults of Vestron Video has unleashed The Unholy for horror fans to indulge in for the first time on Blu-ray.  Growing up and going to a Catholic school, films like The Exorcist and The Unholy managed to be all the more terrifying to me because the prospect of demons coming from hell was thought to be a possibility.  Sure, Freddy and Jason could get the young me nervous at night, but what films like The Unholy presented were the kind of thoughts that had me afraid to keep the lights off at night. But does the film hold up decades later? That’s a tough call, but with the new digitally restored version of the film now hitting the shelves, it’s worth grabbing a little holy water and checking out.

Father Michael (Ben Cross) is simply your typical priest and is called out to a location where a man threatening to jump from a balcony is requesting to speak with the priest.  Meeting with the man on the ledge, Father Michael seems to feel he’s gotten through to the suicidal man, and through a bizarre incident, Father Michael is pulled from the safety of the room through a window and falls to what should have been certain death.  Yet by a miracle or simple luck, the priest manages to survive nearly unscathed, and the members of the church begin to believe he is special, “the chosen one,” and in the process he is placed in charge of his own parish.

The film is something that is a blend of a horror film and a murder mystery but seems reluctant to really commit to one or the other. This is evident when it’s discovered that the previous priests were murdered at the parish where Father Michael is expected to take over.  The Bishop and other priests seem to think there is something unholy afoot at the St. Agnes church, but Father Michael is reluctant to believe it is supernatural and thinks there is a logical explanation to it all. This is kind of bothersome because, despite Michael seeing a demon and surviving a fall that would kill anyone else, he still figures there is a practical reason for all this.

Toss in some hardcore “Satanists” who perform mock sacrifices and bad girls trying to seduce the priest, and, well, we can see where Father Michael is being practical in thinking the killings are of a human design, but frankly where is the fun in that? There comes a point where when you have a character resist so much that you stop caring. He’s a priest; to a degree his job is believing a story that is fantastic, and it’s his place to spread the word of the bible, but things that occur before his eyes he has to question?

It’s clear the studio wanted to make a traditional horror film as the ending leaves no doubt to the viewer, but you can see the struggle this film has with embracing its horror roots from the get-go.  It’s a struggle that does indeed hurt the film, but it is still entertaining with Hal Holbrook playing a priest and Ned Beatty doing a fine job as a detective in the film.  The performances throughout are solid, and the cinematography is definitely moody with some nice shadow and lighting work, but it’s the tone of this film that just feels sloppy. It completely ignores the idea of suspense and instead falls back onto its visual style, which in my opinion is never a good thing.

The Unholy is presented in the aspect ratio 1.85:1.  The 1080p image is arrived at with an AVC MPEG-4 codec at an average of 26 mbps.  Those involved with the remastering of this print did a great job. There was little to no dust or scratches or anything to indicate the age of the film despite the grain that comes along with movies that were shot on film.  I love the look of this film. The shadow and blacks are great, there is nice separation here, and really it just reminds me how much I do miss seeing film.  The skin tones seem good as well, though at times the image did seem a bit soft in the daytime sequences, but nothing that was too bothersome.

The film is presented in the original 2.0 stereo sound.  Considering this is the original source track for the film, there are some compromises you have to make with the film.  Thankfully the dialog comes through loud and clear.  I was worried I’d have to crank my volume, but the mix was well compensated considering it had only the two speakers to rely on.

Audio Commentary: Director Camilo Vila:  The director has a moderator to ask him questions throughout the film.  At times his accent is a bit heavy, and you can hear some questions and answers get lost in translation.  What is great here is getting to hear the director’s feelings about the film and the changes that were made to the ending.  This is the kind of honesty I come to these commentaries hoping to hear but rarely get.  While the film definitely has its flaws, I can at least appreciate it more after hearing his side of the story.

Isolated Score Selections and Audio Interview with Composer Roger Bellon: These tracks are always fun, where you get to hear how much a score can impact a scene and how music can be so subtle that you would never notice it any other way.

Sins of the Father: (19:09)  A Conversation with Ben Cross about how he got involved with the film and discussing his memories from working on the film and how it impacted his life.

Demons in the Flesh: (22:25) personally this is my favorite featurette where we get to hear from the makeup FX guys involved with the creation of the creatures in the film.  Here we get to hear what happens when things don’t go as planned and disaster follows.  The stories here would make for a fascinating documentary in my eyes. Just a great honest segment that shows how it’s not as easy as it seems to get those monsters on the screen.

Prayer Offerings: (18:35) An interview with production designer and co-writer  Fernando Fonseca where he delves a bit more into the production of the film and the changes that were made to the final act.

Vestron Video has once again delivered a Blu-ray for the fans to appreciate this lost gem of the 80’s.  While I can appreciate the film, I’m having a hard time saying I really like this one.  Of the Vestron releases this may be the weakest title, but I appreciate the love and attention that is given to the remaster of the film and all the supplemental material that’s been included.  Honestly this is a film I feel should be remade. They should simply go with being a horror film; there is some creepy material that is timeless here and I think would do well with today’s technology.

Brent Lorentson is a horror writer and film critic based out of Tampa, Florida. With a BA in Digital Film, he co-wrote and co-directed Scavenger Hunt. His short stories have appeared in various horror anthologies. In 2019 his short script Fertile Blood will be a part of the anthology horror film Slumber Party. He is currently working on his first novel A Dark and Secret Place set to be released in late 2019. Favorite Films: Taxi Driver, Fight Club, I Saw the Devil, The Wild Bunch, Dawn of the Dead, A Clockwork Orange, Pulp Fiction, Heathers, The Monster Squad, and High Fidelity.
Trespass Despicable Me 3