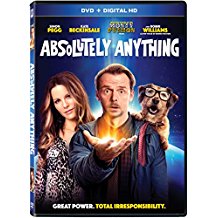 The Monty Python comedy group has been a staple of British comedy for decades; personally my favorite film of theirs will always be Life of Brian.  For director Terry Jones, it’s been a while since he has stepped behind the camera to helm a picture, and it’s been even longer since he directed the 1983 classic The Meaning of Life. It’s not uncommon for directors to step away for years only to come back and return with some kind of passion project. Add into this mix Simon Pegg, whose comedic timing I would have figured would make him a perfect fit for a Monty Python film / revival; it just seemed that Absolutely Anything had everything in place to be a success.  And as a comedic cherry on top, you have Robin Williams doing voice work for the film.  This just has the ingredients for comedy gold. So how does a film with this talent get released and no one seems to know about it?

The film starts off with a group of aliens that capture information from a rocket that was launched out into space in the hopes that the items would come into contact with intelligent life.  Well, the aliens (voiced by the Monty Python team) can’t seem to decide if they want to destroy the planet or bring us into their elite group, so they decide the way to vet us is by giving one human a limitless power where he can make anything happen so long as he waves his hand and says it out loud. Neil (Pegg) is the one who is randomly picked to receive these powers, and with a wave of a hand, comedy sort of ensues.

Neil, for the most part, is your average guy; he’s a teacher who seems to be liked by very few at the school, and he happens to have a crush on his beautiful neighbor, Catherine (Kate Beckinsale).  As a dream/ hobby, Neil is working on a novel and has dreams of being a successful writer. Oddly enough, Catherine works for a company that exploits writers and tries to create scandals, though this is something Catherine wants nothing to do with.  My first bone to pick is why make a big deal about these two and their professions and not use it later on?  There are so many directions this can go, but instead his writing is mostly forgotten by the time he gets his powers.

Unfortunately what is done with the powers is wasted.  We see Neil do so much, yet aside from him killing his entire class that he does by mistake not knowing he is even doing it, everything that follows seems so safe and childlike that I have to wonder what they were thinking when they wrote this.

As the romance blossoms, Neil is unsure if Catherine is into him because he willed it because of his powers or if she really cares.  To complicate matters, Catherine’s ex-boyfriend, Grant (Rob Riggle) has popped up back into her life.  Here is another aspect that left me scratching my head. The way we see Grant, he’s treated more as a villain in an old Disney or Nickelodeon film rather than as the real creep he is. It’s frustrating, because the film is rated R, but Grant is this bumbling cartoon stalker that is impossible to take seriously.

Some of what saves the films are the bits with Robin Williams, who is the voice of Neil’s dog, Dennis. Though this again is one of those moments where I feel there is a struggle between the film not knowing if it’s an R-rated comedy or a kids’ film, there really is no in between. If the film simply stuck with one tone, then perhaps the film would work better. Kate Beckinsale does her best here and remains charming and does what she can with her role, but what she is given to work with isn’t much, nor is it very practical.

I waited a bit before writing this, because it’s been a while since I’ve been this frustrated with a film.  With no commentary on the disc or behind-the-scenes supplements, there is nothing available on the disc to explain itself.  These are actors and a director I respect, and I just can’t understand how something with so much talent can go so wrong. Perhaps I just couldn’t connect with this film but the rest of the world may; I’d be OK with that.  As the film stands, though, it just didn’t work for me. Subtract a few curse words and a nude scene and this is practically a kids’ film from 90’s Disney era. It is what it is, as they say, but it is absolutely anything but a success in my book.

Brent Lorentson is a horror writer and film critic based out of Tampa, Florida. With a BA in Digital Film, he co-wrote and co-directed Scavenger Hunt. His short stories have appeared in various horror anthologies. In 2019 his short script Fertile Blood will be a part of the anthology horror film Slumber Party. He is currently working on his first novel A Dark and Secret Place set to be released in late 2019. Favorite Films: Taxi Driver, Fight Club, I Saw the Devil, The Wild Bunch, Dawn of the Dead, A Clockwork Orange, Pulp Fiction, Heathers, The Monster Squad, and High Fidelity.
Tuesday Round Up: July 11, 2017 The Strain: Season 3