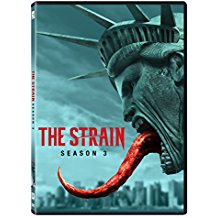 From creator Guillermo del Toro (Hellboy, Blade 2) based off a book he co-wrote, The Strain has been a horror series that has continued to impress as it revs up to begin its fourth season on FX.  It’s a show that centers around a vampire outbreak that began at JFK airport when a plane arrived with all its passengers and crew “dead”, and then things quickly spiraled out of hand.  If your eyes rolled at the thought of simply another vampire story, let me take a moment to explain. What del Toro and Chuck Hogan created is a very unique take on the vampire lore, having their creature of the night more a victim of a wormlike parasite that creates a mutation in the body, and as we discover in Season Three, in the brain as well.  If Season One was the start of the outbreak, Season Three has the human species hanging by a thread, struggling to maintain their place in the world where the scales are precariously ready to tip and plummet in favor of the bloodsuckers.

With the fate of Dr. Ephraim Goodweather’s (Corey Stoll) wife and the disappearance of his son in Season Two, it has left the good doctor in shambles.  He’s drinking heavily and popping pills as he waits at home for his son to return home, though he’s haunted by nightmares that his son has now turned.  The weapon he had created to kill off the vampires has begun to lose its effect, so he is tasked to create a new weapon, something bigger to finally tip the advantage back into the favor of the humans.

Justine Feraldo (Samantha Mathis) continues to run the defense team attempting to protect New York as best she can, but her department is losing men.  One of the cooler things we see that is played with during the front portion of the season is the police using prisoners and those they arrest to help clear out buildings and tunnels.  Really they could have spent an entire season just with this subject alone, presenting the numerous moral dilemmas we see going on here as civilization crumbles.  It’s a situation we see Justine is at first appalled by, yet circumstances show her that it is a necessary evil.

Then we have Abraham Setrakian (David Bradley), who is mostly bent over the Lumen, a book with silver binding that is said to have the key for killing the master. And with Vasiliy Fet (Kevin Durand) splitting his time between helping out the police by clearing the tunnels and running errands for Abraham, there is a lot going on. But the most fun is Quinlan (Rupert Penry-Jones) a rogue strigoi who has a vendetta of his own against the master.

For those that have their complaints about The Walking Dead being slow and not enough action, I recommend giving The Strain a shot. This is a show that manages to fill each episode with the right amount of action but also manages to develop the characters and plot along the way.  Despite having a large cast of supporting characters, what’s fun about the show is you never know just how long characters will survive or when they may become infected.

As the battle for New York spans over this season, there are so many things to enjoy here.  For instance the Battle for Central Park is simply a game changer on its own simply because of the massive scale we see each side take. Another highlight is getting to see Quinlan feud between the Ancients (who do finally have a moment to shine as badass fighters) but go toe to toe with the Master.  Is it a satisfying battle? Well, that’s up for debate, but things get cool when they discover “the crimson worm”.

Personally, though, what I enjoyed most about this season is what we discover about Goodweather’s son and what is happening to him.  Not to give much away, he’s in the custody of the master and is being used as bait to lure Eph into making some rash decisions.  But what gets even a bit cooler is the pet/guardian that Zach (Max Charles) gets in the process of being in the care of the Master.

With the way this season ends, I’m stoked to see just where things are going to go from here. This is a show that raises the stakes each season and continues to impress. Will we get to see what is going on in other parts of the world next season?  That’s the biggest question I have for the series.

My one major complaint with the series is the color grading. It’s a nitpick complaint, but I feel the coloring at times is being pushed a bit too much with either the yellows or blues. Aside from that, the show delivers on every other front.  This isn’t a show trying to win Emmys; this is a show that simply delivers fun in every episode.  I could write all day about how cool the show is and what the characters do that will make you just smile with giddy content, but I don’t want to spoil the fun.  If you love horror or action and just want to have a good time, The Strain delivers, though I should warn you it’s not for the squeamish.

Brent Lorentson is a horror writer and film critic based out of Tampa, Florida. With a BA in Digital Film, he co-wrote and co-directed Scavenger Hunt. His short stories have appeared in various horror anthologies. In 2019 his short script Fertile Blood will be a part of the anthology horror film Slumber Party. He is currently working on his first novel A Dark and Secret Place set to be released in late 2019. Favorite Films: Taxi Driver, Fight Club, I Saw the Devil, The Wild Bunch, Dawn of the Dead, A Clockwork Orange, Pulp Fiction, Heathers, The Monster Squad, and High Fidelity.
Absolutely Anything The Fate of the Furious (UHD Blu-ray) (4K)