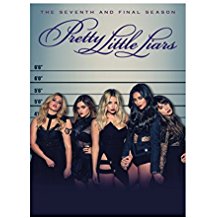 The Pretty Little Liars have finally reached the end of their rope. And while you discovered who little mini-A’s were over the previous six years, you’re finally going to get to the bottom of the entire mystery. I’ll admit it’s a bit of a shocker. With the end upon us, this is no place for beginners. If you don’t know who Aria, Spencer, Emily, Hannah, and Alison are, it’s time for you to head back to the beginning and catch up. You can find our reviews from those seasons here. For the rest of you, let’s talk Pretty Little Liars, shall we?

“It was a well-thought out plan. When it ends up like this, it’s called 1st degree murder.”

The final season begins with the drama already pegged at a steady 11. Hanna (Benson) is missing and in the hands of a threat now calling themselves AD. But getting Hanna back is just the beginning. In a welcome but cliché plot twist, Andrea Parker gets to return as Jessica’s long-lost twin sister, Mary Drake. Of course, she makes a great AD suspect and does figure into the final puzzle solution rather prominently. But that’s not why it’s welcome. I loved watching Andrea Parker play nasty bad gals since The Pretender. The evil twin thing is about as old a plot device as they get, but it kind of works OK here.

For the rest of the Liars: Alison (Pieterse) is being tortured at Radley, and the rest of the liars think she murdered Charlotte and might be willing to give her up to AD in order to save Hanna. I know. Friends like these, right? Still, they come up with a plan to help her, but you know that’s going to end badly and with somebody dead. Do you go to the cops in a cut-and-dried case of both accidental death and defense of another? Of course not. These ladies aren’t called liars for nothing. They cover up yet another situation that drives the season. Because you know AD has them dead to rights and now has plenty of good blackmail material to fill a season… which is exactly what it does.

Spencer (Bellisario) gets the best play time in the final season. Much of it can’t be revealed here, but she does make some discoveries about her own past and her family that uproots her entire family. She also has to deal with the fact that Toby (Allen) has moved on and is now engaged to another woman. But Troian Bellisario does get the best meat to perform this season, which gives her the best chance to show what she can do for the next potential acting gig. It helps when your dad is a well-known television producer who created the likes of Quantum Leap, Magnum PI, JAG, and NCIS. Give her credit; she does a lot with the material, and that’s to her own credit and not Poppa Donald.

Aria (Hale) is still writing the book with Ezra (Harding), and it’s going well in spite of the new AD threats until Ezra’s ex-fiancée, who was thought dead, turns up rescued in Columbia. Aria now has to deal with his need to help her and her family get back on their feet. Years ago Aria had filled out a police report that Ezra had sex with her when he was her high school teacher (which, of course he did). But she never filed the complaint, obviously. AD has the complaint. Now Aria faces a tough decision when AD threatens to release it unless Aria joins the dark side. Her choices here are a bit odd.

Emily (Mitchell) deals with the return of Paige, and both are up for the swimming coach job at their old high school. Of all of the Liars it seems this character is the one with the most revolving-door bedroom antics. I can’t keep track of her partners in just this season alone. She’s the weakest character of the season who doesn’t figure in the real action as much as the others. It really does appear most of her material this season has to do with who she’s going to sleep with this episode. Now I understand that these relationships are a huge part of the show’s appeal to its target audience, but it does make Emily the least rounded or interesting character of the season.

Most of the season is taken up by one of the show’s better props. AD has engineered a pretty elaborate game board that is a mock-up of Rosewood. It has plenty of neat lights and wonderful detail. It’s a game she is forcing the Liars to play with consequences for not following through. Those consequences also figure into a police investigation that is getting very close to the truth about the coverup. The game is one of the show’s more original plot devices and certainly the most compelling.

The season still relies on rather bad decisions by the Liars and many of the same contrived events to move the story along. There is a huge effort to bring back many of the show’s absent characters and actors, which is typical and appropriate for a show in its final season. All of that is fine, but things appear incredibly rushed when we get to the series finale. There’s a one-year jump. I’m not sure it will really satisfy the fans who have gotten used to this slow boil of events that suddenly cranks into high gear and flies too fast and relies on too much character exposition to fill in the gaps. It feels like there is a season missing here. These guys knew it was ending. They claim to have known how it was ending for years, but it sure looks like they suddenly felt the need to hustle in the final 90 minutes. Seems like poor planning to me and a lot of wasted side-roads during the previous 19 episodes that could have been better used to get us to the resolution more smoothly. It’s cliché and clever kind of at the same time, and I’m sure fans were quite taken in by the final reveal. But it’s a little surprising that the series finale was actually one of the lowest-rated episodes in the series run. That’s quite unusual for a show with this kind of loyal fan base. I suspect many are just waiting for the DVD set. Here it is.

The series does introduce us to a younger group of girls who are appearing to start the Liars’ events in motion. Perhaps there is hope for a spinoff?

You get all 20 episodes on five discs. That’s too many per disc for good picture quality. The extras are all pretty short except for a 45-minute wrap party special. Most of the short features deal with the romantic angles of the show. This time it really is “game over”.

Gino Sassani is a member of the Southeastern Film Critic's Association (SEFCA). He is a film and television critic based in Tampa, Florida. He's also the Senior Editor here at Upcomingdiscs. Gino started reviewing films in the early 1990's as a segment of his local television show Focus. He's an award-winning recording artist for Omega Records. Gino is currently working on his 8th album Merchants & Mercenaries. Gino took over Upcomingdiscs Dec 1, 2008. He works out of a home theater he calls The Reel World. Favorite films: The Godfather, The Godfather Part II, The Body Snatcher (Val Lewton film with Karloff and Lugosi, not the pod people film), Unforgiven, Gladiator, The Lion King, Jaws, Son Of Frankenstein, The Good, The Bad And The Ugly, and Monsters, Inc.
Unforgettable (Blu-ray) Atomic Blonde