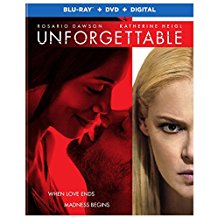 When it comes to movies about psychotically wronged women, the crazier things get, the better. Unfortunately, the makers of Unforgettable — a dull domestic drama/wannabe thriller — never got the memo. It’s a shame because the movie had some of the ingredients to be a deliciously pulpy thriller, including an amusingly unhinged turn from one of its stars. But in the end, this comes off as a Lifetime movie that slipped through the cracks, fell upwards, and was accidentally released in theaters.

Julia Banks (Rosario Dawson) is starting a new chapter in her life by moving in with nice guy fiance David Connover (Geoff Stults), who has young daughter named Lily (Isabella Rice). Although (step)motherhood doesn’t come naturally to Julia, her heart is in the right place and she consistently puts in an honest effort. None of that matters to Tessa (Katherine Heigl), David’s ex and Lily’s overbearing mom. Julia and Tessa share some predictably tense moments early on, but Tessa permanently comes unglued once she finds out David and Julia are engaged and feels like this other woman is erasing her from her former life.

“You took everything away from me.”

As a result, Tessa sets out to secretly destroy Julia by driving a wedge between her and David. To accomplish this, Tessa digs into Julia’s troubled past, which includes an abusive ex-boyfriend (Simon Kassianides). As Julia becomes more and more paranoid about her violent past catching up to her, she starts to realize that the greater danger is in the here and now, leading to a fateful showdown with Tessa.

The trailer for Unforgettable — featuring the wonderfully cheesy tagline, “When Love Ends, Madness Begins” — absolutely leans into the idea that we are in for some campy thrills. Denise Di Novi, an extremely successful producer for more than 25 years (her resume includes hits like Edward Scissorhands and Batman Returns) makes her feature directorial debut here, and she comes off as someone trying to earnestly prove her chops as a storyteller. That is obviously an admirable goal, except she picked a thoroughly silly story to take so seriously.

Look, I really do respect the attempt to not simply present Tessa as a jealous monster. There’s even a hot minute or two in the first half of the film where you might feel a twinge of sympathy for Tessa’s plight. (No one ever wants to feel like they are replaceable.) The problem is that Heigl plays Tessa as an intense and clearly destructive person from the moment we meet her, which subsequently kills any half-hearted attemps to humanize her.

In fact, Unforgettable spends almost its entire 100-minute running time hopelessly clinging to some semblance of respectability in the way it presents Julia and Tessa’s rivalry. That would be ok if the movie wasn’t filled with the sort of nonsense you’d typically associate with entertainingly trashy thrillers like Single White Female or even more recent offerings like The Perfect Guy. Besides wondering what a bland dude like David ever saw in someone like Tessa (and vice versa), the plot requires Julia to keep a staggering amount of personal information on her phone so that Tessa can easily swipe her identity. And the less said about the movie’s spectacularly absurd and anticlimactic ending, the better.

Heigl’s star has certainly dimmed in recent years, but I always felt like she was miscast as a bubbly rom-com heroine. The Tessa character actually plays more to her Type-A strengths, and the actress is definitely game. However, her arch performance feels out of whack with the movie’s more grounded aspirations. Dawson, on the other hand, is required to be in some sort of distress most of her time on screen, which obviously isn’t nearly as much fun. On top of that, the character’s eventual empowerment feels underwhelming and unconvincing. Meanwhile, Stults — a perfectly acceptable and handsome slab of man here — will mostly make you wonder what all this fighting is about. Thank goodness for Cheryl Ladd, who pops up a couple of times as Tessa’s withering mom. (Which helps explain why Tessa is the way she is.)

Unforgettable had the potential to be a fun little thriller, but it’s clear the filmmakers were not interested in making a guilty pleasure. Sadly, they made a movie that doesn’t offer much pleasure at all, guilty or otherwise.

Unforgettable is presented in an aspect ratio of 1.85:1. The 1080p image is arrived at with an AVC MPEG-4 codec at an average of 36 mbps. The movie’s opening flashfoward is an interrogation scene that features a dull and artificial sheen, presumably to convey the notion that the action is taking place in a different time period. Once the film flashes back to its main timeline, the image considerably brightens up. Julia and David’s house is impossibly posh and feels pretty cozy thanks to some warmer flesh tones, while Tessa’s wardrobe is highlighted by some resplendent whites and other bold (and sexy) color choices. Black levels, however, are a bit murky and not deep enough to offer satisfying shadow detail, which saps some tension from a couple of sequences (including one where Julia potentially spies an intruder outside her house). In the end, this is a pretty standard HD presentation that (like the movie itself) doesn’t pop as much as I hoped it would.

The DTS-HD Master Audio 5.1 track offers stronger sub activity than I expected from a thriller with minimal action. While some of the bass is used to punctuate Julia and Tessa’s overwrought final fight, the heavy use of subs for soundtrack cuts like Sia’s “Bird Set Free” feels obnoxious. The mix also feels consistently off; on several occasions, I had to turn the volume higher than normal to hear the movie’s dialogue, only to scramble to turn it down once a song/the movie’s score started blasting from the speakers. That being said, the rear channels provide a good level of unobtrusive activity, which is a rare understated touch on this track.

Reclaiming What’s Yours — Making Unforgettable: (10:09) This behind-the-scenes featurette makes it pretty clear that the cast and crew sought to ground this ludicrous thriller in some sort of reality. There is a lot of sympathy for Tessa here, which feels off once you’ve seen Heigl’s one-dimensionally demented performance in the film. There’s also a breakdown of the climactic clash between Julia and Tessa (the filmmakers wanted to avoid staging it as a straight-up catfight).

Commentary by director Denise Di Novi: Di Novi has produced more than 40 films in her 25-year career, but Unforgettable was her first time in the director’s chair. While the filmmaker points out some subtle visual cues you may have missed (the birdcage motif during the opening credits; a nod to 1940s noir in a scene between Tessa and David), Di Novi mostly just narrates what is happening on screen, which doesn’t make for the most stimulating commentary.

Deleted Scene: (2:06) The disc’s lone deleted scene is a rare sweet and happy moment between Julia and David. There is an optional commentary with Di Novi, who says she removed the scene because she felt Julia and David’s chemistry was conveyed strongly enough in the theatrical cut. I respectfully disagree.

Unforgettable doesn’t come close to living up to its title. The one thing to recommend here is Heigl embracing her dark side, which she did to much more amusing effect in Home Sweet Hell.

As a result, I can’t even suggest you watch this one for its “so bad it’s good” camp factor because that doesn’t exist.