Posted in: The Reel World by Brent Lorentson on August 7th, 2017 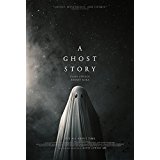 It’s difficult to be original and innovative when it comes to tackling a haunted house film. Ghost stories have been around for ages and told just about every way you can imagine, so what do you do to give the audience something they have never seen before? After coming back from directing Pete’s Dragon, writer/ director David Lowry a delivers a small intimate film that manages to take the haunted house story and makes it something unique from all the rest. Though when I say unique, and when I say innovative this may not be a positive for some. The film begins by introducing us to a couple played by Casey Affleck and Rooney Mara; their characters are simply credited as C & M.  Early on we see them interrupted from their sleep after hearing a crash on the piano, the pair investigate the noise but of course find nothing. The film does a great job at pulling us in early on by creating a creepy unsettling atmosphere.  From the start what helps set the tone is its boxy 1.33:1 aspect ratio, this is something that may seem distracting but it’s a crucial storytelling device that is used so effectively here, I have no doubt we’ll see more of this down the road.

It’s when C (Affleck) dies in a car accident that the story begins to take shape.  We watch from a distance as M (Mara) goes to the morgue to identify her husband. The scene doesn’t cut away as we watch her go through the emotions of nervousness, shock and grief. As the sheet is pulled back over to cover C, the camera continues to hold…and hold…and hold till suddenly we see C sit up with the sheet still covering him. We watch him roam the corridors of the hospital with the sheet covering his body, two black slits for his eyes, though all we see is black.  C is faced with the white corridor of light which we are to believe is to be heaven or whatever you’d like it to be, but C doesn’t enter it and instead continues to walk. His walk takes him back home; a home that we will eventually see is where he seems to wish to remain.

By this point you will have realized the film is comprised of many long takes, it’s something that helps you feel as though you are a character in the room, watching an observing. And in shots we now see the ghost in the sheet, watching and observing in silence. It’s this artistic decision that gives us perhaps the most painfully tedious scene I’ve ever witnessed where we watch a distraught M eat a pie. Not a slice of pie, but the entire thing cut between two long shots.  I get it the director wants to capture the tedium of life that C is observing silently, but this goes on for far too long. No dialogue, no music just the scraping of the fork against the pan as she eats.

In a touching yet painful scene, M scribbles a note on a piece of paper, she folds it and stuffs it into a crack in the wall. C is curious about what she wrote, but being a ghost prevents him from getting to the note.  We see him scratch and scratch at the wall and quickly this goes from sweet to sad.  It’s moments like this that had the greatest impact on me and go on to express the love C has for his wife while expressing the tedium of the afterlife he now lives.

What’s quite impressive is how much emotion we manage to see expressed by this white sheeted ghost. There are some lights flickering and even a moment later in the film where things break, but as a character, without him ever saying a work we really can feel for this character.  Imagine the pain of seeing those you love crying but you can’t comfort them, or seeing the ones you love with another lover, but most painful of all when those you love leave and you are forced to stay and endure.  We see how his home goes through new owners and changes and C remains, always silently watching.

To further accentuate the films atmosphere is the impressive score by Daniel Hart.  Instead of going with a more traditional score it seemed more so that the string instruments simply came in to accentuate moments.  The cinematography is simple yet profound, on a technical level and concept level this film is great and has so much to step back and appreciate.  As an audience member this will have its fans but the film would have been far more effective as a short film. The film set out to capture the loneliness and tedium that comes with being a ghost, it achieved that but in the process it forgot one crucial element and that is keep the people in the seats entertained.

Brent Lorentson is a horror writer and film critic based out of Tampa, Florida. With a BA in Digital Film, he co-wrote and co-directed Scavenger Hunt. His short stories have appeared in various horror anthologies. In 2019 his short script Fertile Blood will be a part of the anthology horror film Slumber Party. He is currently working on his first novel A Dark and Secret Place set to be released in late 2019. Favorite Films: Taxi Driver, Fight Club, I Saw the Devil, The Wild Bunch, Dawn of the Dead, A Clockwork Orange, Pulp Fiction, Heathers, The Monster Squad, and High Fidelity.
S.W.A.T.: Under Siege (Blu-ray) 1944