Posted in: Disc Reviews by Brent Lorentson on August 4th, 2017 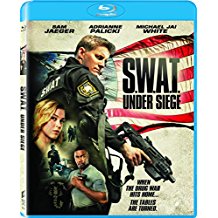 An action film with a running time of 89 minutes should mean that it’s going to be lean on the story and keep things moving at a fast pace.  S.W.A.T: Under Siege delivers just that, but unfortunately in the process delivers something that we’ve seen many times before.  The film is being branded as a sequel (by name only) to S.W.A.T (2003), the film with Colin Farrell which was an adaptation from the TV series from the 70’s.  S.W.A.T: Under Siege has nothing to do with any of the previous incarnations, and has relocated from sunny California to Seattle Washington. But is the film worth checking out?  Well I’m not a fan of sequels that go straight to DVD, but this film does dangle a wild card for the audience that convinced me to give this a shot, Michael Jai White (Spawn, Black Dynamite).

It’s the 4th of July and the S.W.A.T unit is ready to have a short and easy day so they can get home and enjoy the holiday with their families.  But what kind of an action movie would it be if the holiday didn’t take a turn for the worse with terrorists and a lot of gun fire?  The team gets a call about a big shipment that’s being made at a shipping yard, with the DEA taking lead they head to the warehouse that turns out to be something more dangerous than it seems. After an intense firefight, instead of finding drugs or guns in a shipping container, they find a man The Scorpion (Jai White).

Travis Hall (Sam Jaeger) takes the man into custody and brings him to the S.W.A.T compound to be interrogated.  Ellen Dwyer (Adrianne Palicki) leads the team and is forced to make some tough calls about Scorpion who claims that there is a rat on her team and that there will be many people coming to take him for information he has.  As it would turn out, Scorpion was right and a mini army of heavily armed men surround the compound.

The plot is anything but original and everything you could consider a twist is about as obvious as a Norwegian Death Metal singer at a convent.  But to the films credit, it knows it’s not fine art, it’s just here to entertain with fun shoot-outs and some cool fights, and for the most part that’s where this delivers.  Michael Jai White is simply a guy that is fun to watch, how he seems to not be a bigger star is beyond me.  Getting to see him beat up some bad guys and have a few quippy one-liners in the process is all I needed to have some fun with this and I got what I was hoping for.

With a limited budget the film does manage to do an admirable job with its attempt at being Assault on Precinct 13, but the film is so flat and lacks anything resembling atmosphere or tension.  Really this feels like it could have just been a cool extended episode for a TV series that could be on any network cop show. Is it bad? Not really but I have a hard time recommending this.

Swat: Under Siege is presented in the aspect ratio 1.78:1.  The 1080p image is arrived at with an AVC MPEG-4 codec at an average of 30 mbps.  This is a sharp looking picture and yes this offers up a clear image, but what is lacking is richness, depth, but most importantly atmosphere.  Throw a filter on this or give it some grain and I’d be happy but this just looks to polished and when you see the CGI muzzle flashes it just appears more CGI than it needed to be.  My problem is, the look just reminded me of a made for TV movie from the 90’s, while that’s not a terrible thing, its production value just didn’t win me over.

The DTS-HD Master Audio 5.1 track keeps the fire power loud in during the gun fights while delivering a clean balanced dialogue.  While we do get a solid mix that does utilize the dynamic range with certain effects, this really isn’t anything to get excited about either.  There is some nice ambient sound in parts but it’s still nothing all that remarkable.  What kind of bugged me is the score, very generic and at points it had me feeling I was watching a TV show from the late 90’s which goes hand in hand with the over-all look of the film.

While there are definitely worse films out there, S.W.A.T: Under Siege underwhelms in a way that I feel the talents of Michael Jai White were wasted.  With the premise being a siege film, I wish there was a little more tension but for a straight to DVD release you can only reasonably expect so much.  For a late night movie on Netflix, this film is on target to distract you while folding laundry.

Brent Lorentson is a horror writer and film critic based out of Tampa, Florida. With a BA in Digital Film, he co-wrote and co-directed Scavenger Hunt. His short stories have appeared in various horror anthologies. In 2019 his short script Fertile Blood will be a part of the anthology horror film Slumber Party. He is currently working on his first novel A Dark and Secret Place set to be released in late 2019. Favorite Films: Taxi Driver, Fight Club, I Saw the Devil, The Wild Bunch, Dawn of the Dead, A Clockwork Orange, Pulp Fiction, Heathers, The Monster Squad, and High Fidelity.
Crashing: The Complete First Season (Blu-ray) A Ghost Story