Posted in: The Reel World by Brent Lorentson on August 10th, 2017 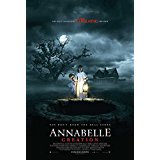 Following the success of The Conjuring, it was no surprise that sequels would follow, but I have to admit seeing an Annabelle film was a bit unexpected. While The Conjuring was based on true events (as true as one may or may not wish to believe in the paranormal), Annabelle was mostly a work of fiction. I’ll admit I’m a bit of the fan of the Warrens and have read plenty about their investigations, and I certainly feel their life is ripe for the Hollywood treatment along with the hundreds of case files they developed over the years.  While the first Annabelle did well at the box office, it took a beating by critics, but those involved at the studio see that there is still money to be made as they continue to expand the franchise.  With spinoffs in the works, a film about the Nun entity as well as a film about The Crooked Man, and with a Conjuring 3 in the works, a lot is riding on the success of Annabelle: Creation.

The film appropriately opens with the creation of the Annabelle doll; we see that it is the first of its kind, handcrafted by Samuel Mullins (Anthony LaPaglia).  Samuel is a good husband and a good father; we get to watch him playing a game with his daughter, one that will be familiar to those who saw the previous film. Sadly, a tragic accident occurs and she is killed.

Years later, Samuel and his wife Esther (Miranda Otto) open their home to a group of orphaned girls who are looked after by a nun, Sister Charlotte (Stephanie Sigman).  For a good portion of the film Esther is locked away in her bedroom. The children are forbidden to enter it, as well as Annabelle’s old bedroom.  As for why Esther is bedridden, well, it takes time for this explanation, and frankly I wish it was something we never got.

As an audience, we get it; we know Annabelle is haunting the house, and we’re supposed to be getting the story behind the doll, but this all seems to be an afterthought.  Instead, this is really the story about Janice (Talitha Bateman).  Janice is one of the young orphaned girls who has difficulty getting around since she has been diagnosed with polio.  She of course is plagued by the fear that no one will ever want her, and all she wants is to be a normal little girl but has accepted that it will likely never happen. Janice does have one friend, Linda (Lulu Wilson) who looks after Janice as a caring sister, and it’s their bond that gives a sort of grounding for this film.

Annabelle sees the loneliness that Janice endures, and it’s something she can relate to, so obviously Janice would be the first one that Annabelle would reach out to.  Some of the film’s creepier moments and only genuine scares come from the first half of the film as Annabelle is first making her presence known.  They may be all fun and predictable sight gags, but when things are kept simple with the film is when it works.  But then the film wants to continue to hit us over and over with jump scares that not only lose their impact, but the story just crumbles because of this.

It’s no longer about an entity taking possession of a doll, but it seems to just do whatever it wants and possesses whatever it wants or take any shape it wants.  For a film about a possessed doll, we barely see a possessed doll.  It’s as though we are watching a different film where the filmmakers just scribbled in the name Annabelle to lead people to believe this is the same film. I mean, there are times when they discuss destroying the doll, but as a member of the audience, I’m not convinced.  In Child’s Play, we see a possessed doll; we see the doll create mayhem. Here we see everything but the doll create chaos, yet everyone wants to destroy it.

Let’s not even get into the continuity of a nun hearing confessions, or why people who own a home they know has something evil in it trying to kill them go ahead and try to make it an orphanage. Let’s also not worry about the logic of how a girl is screaming and is pushed into a barn while other girls are a stone’s throw away; no one hears the screams, but when she’s locked in the barn, suddenly they think they hear something. Seriously, just try not to think about things while watching this film, or you’ll simply be banging your head against the seat in front of you in frustration.

Talitha Bateman’s performance in the film is what sells the movie. Frankly this is one of the best performances I’ve seen from a child in years, and it has me curious to see what direction her career will go following this film. If we were given a film that was more stripped down and focused on Janice and Linda while they dealt with Annabelle, we could have had something great.  The Devil’s Backbone and The Orphanage are great films that delve into orphans and ghosts; it’s a shame no one thought to watch these films prior to filming. With David F. Sandberg at the helm following the mild success of Lights Out, he seems to rely too heavily on the jump scares rather than just the actors and developing atmosphere.

I think the best way to describe this film is that the title of the film and the presence of the doll distract you like a beautiful magician’s assistant from seeing the mess that is really going on.  It has jump scares, and it is entertaining, but it lacks substance.  Personally this only reflects how great a horror director James Wan really is and what a rare force of nature he is to film.  The film is still going to rake in a lot of money, and mostly I see audiences having a good time with this, but for the horror fans out there, I don’t blame you for sitting this one out.

Brent Lorentson is a horror writer and film critic based out of Tampa, Florida. With a BA in Digital Film, he co-wrote and co-directed Scavenger Hunt. His short stories have appeared in various horror anthologies. In 2019 his short script Fertile Blood will be a part of the anthology horror film Slumber Party. He is currently working on his first novel A Dark and Secret Place set to be released in late 2019. Favorite Films: Taxi Driver, Fight Club, I Saw the Devil, The Wild Bunch, Dawn of the Dead, A Clockwork Orange, Pulp Fiction, Heathers, The Monster Squad, and High Fidelity.
Big Little Lies (Blu-ray) King Arthur: Legend of the Sword (UHD Blu-ray) (4K)