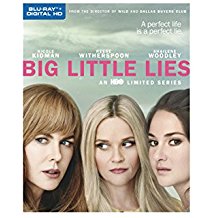 Big Little Lies — HBO’s star-studded and (deservedly) Emmy-nominated limited series — is structured like a typical murder mystery. We know someone has been killed, but we don’t know the perpetrator or even identity of the victim. On top of that, the limited series format promises that we’ll actually have an answer by time these episodes wrap up (**cough** The Killing). But the reason Big Little Lies shines— other than top-notch performances and stellar direction — is because beneath the murder-mystery veneer lies a darkly funny drama about all manner of adult relationships: husband/wife, ex-husband/ex-wife, mother/daughter, mother/fellow-mother, and so on.

“I love my grudges. I tend to them like little pets.”

The miniseries, based on the 2014 best-selling novel written by Australian author Liane Moriarty, is largely set in the affluent portions of Monterey, California. We find out very early on that a murder has been committed during a public school trivia night (which actually turns out to be an Adult Talent Show/Costume Party, but whatever). The main action, however, flashes back and begins during the first day of school. Madeline McKenzie (Reese Witherspoon) is the queen bee in town; she has a young daughter with husband Ed (Adam Scott) and a teenage daughter with ex-husband Nathan (James Tupper), who himself is re-married to yoga teacher Bonnie (Zoe Kravitz).

Celeste Wright (Nicole Kidman) is a retired lawyer-turned-stay-at-home-mom with twin boys. Together with handsome husband Perry (Alexander Skarsgard), the pair make a picture perfect couple…at least on the surface. Jane Chapman (Shailene Woodley) is the blue-collar new arrival in Monterey looking to make a fresh start with her son Ziggy (Iain Armitage) after a mysterious past trauma. Unfortunately, Ziggy is accused of attempting to choke the daughter of icy Renata Klein (Laura Dern) during the first day of school. Ziggy denies the incident ever happens, but it immediately puts Renata and Jane at odds. Madeline, feeling sympathy for Jane after an earlier run-in with the young mother, unofficially leaps to Jane’s defense and relishes the opportunity to trade barbs with Renata. But what does this relatively minor (alleged) incident on the first day of school have to do with the inevitable murder?

The answer, according to Big Little Lies, is nothing…and everything! The series sprinkles in police interview clips with minor, inconsequential characters throughout the entire seven-episode run…and it’s by far the weakest part of the show. I get why these scenes don’t feature any of the characters who are actually important to the story, which is to keep us thinking any one of the main players might be the killer or victim. However, these sequences simply end up being comprised of vague gossip over events that we either just saw play out on screen or are about to witness for ourselves.

Not surprisingly, the miniseries thrives when it is showing rather than telling. And a lot of the credit for the “showing” has to go to filmmaker Jean-Marc Vallee (Dallas Buyers Club, Wild), who directed every episode of Big Little Lies. Just as he displayed with Wild, Vallee has a fantastic knack for framing the way people interact with their surroundings. So while characters like Madeline, Celeste and Renata each have seaside views to die for, Vallee is able to visually convey the intense solitude each of those women feel. The director’s most effective flourish, however, is the way he depicts Jane’s past trauma as a literal out-of-body experience.

“I feel so ashamed for saying this, but being a mother is not enough for me.”

Each episode was also written by the mega-successful David E. Kelley, who owns Emmys for Best Drama Series and Best Comedy Series (The Practice and Ally McBeal, respectively). So it’s no surprise that Big Little Lies is seriously funny (anytime Madeline goes on the offensive), while still being able to depict domestic abuse in a chillingly realistic manner.

Witherspoon and Kidman are both Oscar-winners who have also been movie stars for more than 20 years. So when I say that their performances in Big Little Lies are either the best work of their careers or pretty damn close to it, it’s meant as the highest praise possible. Witherspoon, in particular, is at the peak of her powers here. The actress — who previously delivered another career-highlight performance for Vallee in Wild — gets to play to her strengths, which are a unique mixture of Type-A personality (Election) coupled with warmth and sass (Legally Blonde). For a while, Kidman doesn’t appear to be doing much, but it soon becomes clear that it’s because almost all of Celeste’s existence consists of her putting on a brave/happy face for her friends and for her husband. (Skarsgard, by the way, is equally fantastic; he often makes Perry go from charming to frightening in the space of a single line reading.)

Woodley similarly is required to keep a crucial part of her life hidden as Jane, but the strength of her performance is how believable she feels as a flustered young mother. At the other end of the spectrum, Dern is reliable funny as the closest thing to a cartoon villain here. Still, Dern does manage to find the motivation (if not the humanity) in Renata’s monstrous behavior. The great thing about the now-thriving limited series format is that it gives stories like Big Little Lies the chance to sprawl. In this case, that means the men in the cast — who might’ve otherwise been marginalized — get to add nuance to their characters. Scott is especially good as the perfectly nice guy who isn’t exactly igniting Madeline’s passion.

Even with seven episodes to flesh out the story in Moriarty’s book, Big Little Lies still occasionally feels overstuffed (not only is Madeline fighting to stage a controversial production of “Avenue Q,” but the musical’s director also gets his own mini-storyline) and tidy (Jane moving to Monterey doesn’t help her get away from her trauma, it improbably magnifies it). That being said, there is so much rich and entertaining material here about friendship, motherhood, marriage, and so much more that it’s easy to overlook the indulgences of this miniseries.

Big Little Lies is presented in its original aspect ratio of 1.78:1. The 1080p image is arrived at with an AVC MPEG-4 codec of 33 mbps. The California setting probably conjures a sunshiny visual palette for this limited series, but this presentation is considerably chillier than that. Director Jean-Marc Vallee and his cinematographer Yves Belanger seem to favor natural lighting conditions, which results in a hazy, dream-like quality to much of this presentation. (And not just for the horrifying memories that haunt Jane.) That being said, there is still excellent fine quality on display here — Madeline, Celeste and Renata’s homes all qualify as #HousePorn for different reasons — and the chilly palette actually complements the frosty relationships between some of the women quite well. The finale is almost entirely set at night, and the inky black levels display fantastic separation.

The DTS-HD Master Audio 5.1 track is livelier than your average small-screen relationship drama. The coastal Monterey setting leads to plenty of shots of Madeline and Celeste plaintively looking out over the beach — the beach is also part of Jane’s recurring real-life nightmare — that gives the entire surround sound field an opportunity to flex its muscles in a low-key way. So yes, we hear crashing waves in the distance, but we also get the slightest hint of sub-activity. The music-focused finale is also served very well by this track, which presents every song — along with the miniseries’ dialogue throughout all 7 episodes — cleanly and perfectly balanced.

All of the bonus material is presented in HD. The “Inside the Episode” segments can be found on all three discs, while “About Big Little Lies” is available on Disc 3.

Inside the Episodes: (6:23) HBO offers these weekly behind-the-scenes featurettes for many of its shows, and these mainly feature input from director Jean-Marc Vallee, writer David E. Kelley, star/producer Reese Witherspoon. Unfortunately, each segment here is only about a minute long, which makes them feel rather rushed and a bit pointless. The best “Inside the Episode” accompanied the finale, which Vallee says consisted of two weeks’ worth of night shoots from 8 p.m. to 6 a.m. Episode 2/“Serious Mothering” is randomly the only episode that doesn’t come with an “Inside the Episode” segment.

About Big Little Lies: (7:25) This is a more traditional “Making of” featurette, including cast and crew discussing the story’s themes and universal appeal. (Big Little Lies is a story about marriage, parenthood, community, and all sortsof complex relationships.) Other than transplanting the action from Sydney, Australia to Monterey, the filmmakers strove to remain faithful to the book. Each member of the exemplary cast gets a much-deserved mini spotlight here.

Big Little Lies features all 7 episodes on three discs. This miniseries pretty much covered the entirety of Moriarty’s novel, but this series was so well-received — and the cast and crew obviously had such a great time making it — that there is buzz for a potential second season.

It wouldn’t be an unprecedented move for HBO. The pay channel similarly burned through most of the book that The Leftovers was based on during that show’s first season, but decided to take the series in bold, insane new directions during two subsequent seasons.

Big Little Lies isn’t quite as well-positioned for that sort of hard reboot, but I would absolutely love to see this cast and crew do anything together down the line because “I want more!”