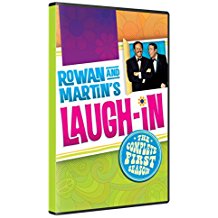 It was 50 years ago this year that Rowan & Martin’s Laugh-In first appeared on NBC. It quickly took the country by storm. The show added such pop culture staples as Sock It To Me, You Bet Your Bippy and Here Comes The Judge. The show managed to attract the biggest names in entertainment of the era. The cast have gone on to become household names. It’s where stars like Goldie Hawn, Arti Johnson and Lily Tomlin got their starts. And it all started with the mind of George Schlatter. After all of those years George still has quite a bit of spunk left. I had the honor to spend nearly a half hour talking to him. Now you get to hear what he had to say. Bang it here to listen to my chat with George Schlatter.

You can also find out more about the complete series of Laugh-In by going Here.

Look for our review of the complete series coming in the weeks ahead.

Gino Sassani is a member of the Southeastern Film Critic's Association (SEFCA). He is a film and television critic based in Tampa, Florida. He's also the Senior Editor here at Upcomingdiscs. Gino started reviewing films in the early 1990's as a segment of his local television show Focus. He's an award-winning recording artist for Omega Records. Gino is currently working on his 8th album Merchants & Mercenaries. Gino took over Upcomingdiscs Dec 1, 2008. He works out of a home theater he calls The Reel World. Favorite films: The Godfather, The Godfather Part II, The Body Snatcher (Val Lewton film with Karloff and Lugosi, not the pod people film), Unforgiven, Gladiator, The Lion King, Jaws, Son Of Frankenstein, The Good, The Bad And The Ugly, and Monsters, Inc.
Billions: Season Two Union Furnace