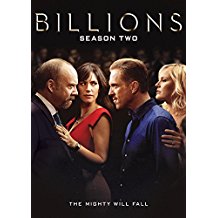 In one corner you have U.S Attorney Chuck “The Scholar” Rhodes, played by Paul Giamatti. He’s the reigning world champion with a record of 80+ to 0. In the other corner is Bobby “Axe” Axelrod, played by Damian Lewis; he could also be considered undefeated. He runs a sexy brokerage firm. Both of these guys walk and talk like champs. There’s a lot of trash-talk between them, but both have very lurid and potentially devastating skeletons in their perspective closets. This season finds them each willing to risk anything just to get to the other.

The strength of two very strong performances immerses us in each of these worlds to a point that we discover something none of these players know, or at least would be willing to admit. They are very much the same, and the culture of their careers is more alike than not. Both are willing to bend a rule for “the common good”, and both believe themselves to be the heroes of their own stories. And that’s where the writing and acting come together for a nice perfect storm. Both characters are heroes to the people around them. They’ve developed almost cult followings. Both are admirable people. Of course, the opposite is just as true. These guys can both play the anti-hero with the best of them. There is both great good and great evil in both. If that sounds complicated here, just imagine how hard it would be to actually pull off. And in Season Two that obsession goes to limits that surprised even me. Both men are literally willing to give up their families, wealth, and careers to bring down the other. The term “nuclear option” means nothing to these guys. The final couple of episodes play out a round in this game that could very well take them both out. They cross some very big lines that you simply can’t come back from.

There are more than two strong performances here. The supporting cast is quite good. In many ways we see these characters through the eyes of their spouses. Who better to provide that inside look that includes the dirty little secrets? Axelrod’s wife Lara is played by Malin Akerman. She’s pretty much the only one here who actually came from a working-class culture. She loves the billionaire lifestyle but worries that it has made her children soft and feeling entitled. She’s not blind to his flaws but is fiercely loyal. Rhodes’s wife is Wendy, played by Sons Of Anarchy veteran Maggie Siff. She’s a therapist who complicates the whole thing, because she works for Axelrod as his sales team inspirational coach and his own father confessor. She’s known Axelrod longer than her husband, and she’s being forced into the middle of this brewing confrontation. I have to say I never liked Siff in Sons Of Anarchy. I always thought she was a weak character. This time I found she provides a crucial voice here that allows the show to move so effortlessly between these two worlds. This is the kind of role I wish I had seen in Sons.

There’s an interesting new character this season. Asia Kate Dillon joins the cast as a crazy smart intern Axe’s firm. But this is a rather unusual character. Taylor dresses and acts in a rather androgynous fashion and announces the preference of the pronouns they, them, and theirs. Axe is able to look beyond all of the oddness and see how brilliant Taylor is. So Taylor becomes a bit of a spotlight. One of the better episodes has Taylor playing for the company in a big annual charity poker tournament. Taylor also leads to insecurities in many of the people who have become accustomed to his reliance on them.

For Chuck, he’s also creating his own potential downfall. His office is under investigation concerning his role in last season’s failed bit to bring down Axe. Christopher Denham joins the cast as a Washington investigator who wants to bring Chuck’s head to an Attorney General who hopes to fire him. Chuck isn’t stupid and ends up pulling a pretty clever end-round on the AG. His father had always wanted him to get the cuts and cut-throat instincts to take high office. Now Chuck has his eyes on the Governor’s Office, but perhaps his father believes he might have created a monster. No question both Chuck and Axe become more ruthless than ever this season.

People are used and thrown under the bus on both sides. The show continues to be rather ambiguous about right or wrong. There is quickly coming a time when there can’t possibly be a way out for either side, and I suspect the series needs to end with both going down. We get a huge hint of that in the final moments of the season finale where the two face off in person once again. It’s a very telling scene and an indication of where this all has to lead.

You get all 12 episodes on four discs. There are three very brief extras. There is a 2-minute feature on the cast, another two minutes on the New York City locations, and a final 8-minute profile of the new character Taylor.

It’s worth it to watch these two performers and actors face off with each other. There are other very good performances and stories going on here, but it’s forever impossible to avert your gaze from the heavyweights in the room. They dominate your attention and compel you to stick around for the ride. Like I said, “Worth it.”

Gino Sassani is a member of the Southeastern Film Critic's Association (SEFCA). He is a film and television critic based in Tampa, Florida. He's also the Senior Editor here at Upcomingdiscs. Gino started reviewing films in the early 1990's as a segment of his local television show Focus. He's an award-winning recording artist for Omega Records. Gino is currently working on his 8th album Merchants & Mercenaries. Gino took over Upcomingdiscs Dec 1, 2008. He works out of a home theater he calls The Reel World. Favorite films: The Godfather, The Godfather Part II, The Body Snatcher (Val Lewton film with Karloff and Lugosi, not the pod people film), Unforgiven, Gladiator, The Lion King, Jaws, Son Of Frankenstein, The Good, The Bad And The Ugly, and Monsters, Inc.
NCIS: New Orleans: The Third Season Exclusive Interview With George Schlatter Creator Of Rowan & Martin’s Laugh-In