Posted in: No Huddle by Brent Lorentson on August 23rd, 2017 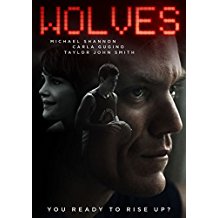 I used to be a basketball fan back in the ’90s when Michael Jordan was a God on the court and you had Larry Johnson as “Grandmama” before Madea was ever a thing. Every year, some sort of inspirational sports story seems to come out. And for the most part it seems, whether it’s basketball or another sport, it’s generally the same story. But every once in a while one of the films will break the mold and give us something special. Don’t get to excited: I’m not saying Wolves is one of those films, but it is at least better than most of the other films of its ilk. I can still watch an NBA game and enjoy it, but it’s just not the same for me. I bring this up because, honestly, I was worried my lack of passion for the game could influence my thoughts. But as any good sports film should do, the story manages to transcend the sport and deliver engaging drama off the court. Unfortunately, there is a bit more drama than this film can handle.

Anthony (Taylor John Smith) goes to private school in Manhattan and is the star player on the school’s basketball team. As their season is winding down and the playoffs are in sight, he is being scouted by Cornell University, where Anthony has dreams of attending. Even as a standout, his coaches and family have concerns that he lacks the aggression it takes to be the next level standout he has the potential to be.

Between school and basketball Anthony manages to find time to also help his father (Michael Shannon) out by recording his lectures on writing at a local college. It’s Shannon’s character who brings more engaging substance to the table. He’s a loving father who wants his son to succeed but struggles to pay his son’s tuition because he has a terrible gambling addiction. Personally, I think Shannon is one of the best working actors out there, and his presence alone seems to attract the focus of the film more so on him than the actual plot.

When the film brings its focus back around to Anthony, we see him struggle with having a pregnant girlfriend who wants an abortion. This storyline just seemed a bit much; as though the writers needed to throw the entire kitchen sink at Anthony to watch him eventually crack under the pressure. It’s a serious matter in the film, yet so much more is crammed in to emotionally and physically wear on Anthony that it doesn’t feel as though Anthony’s pregnant girlfriend is given the proper attention. But that seems to be the running problem with this film; it loves to bring up hurdles for Anthony to surpass while never committing to how he can deal with them. Instead, the only issue that is given any real attention and comes full circle is his father’s gambling addiction.

In 1998, Spike Lee made He Got Game with Denzel Washington, and it covered a father-son relationship as the son prepared to pick a school for college. Wolves seemed to be a hybrid of He Got Game and the ’90s classic Hoop Dreams. It at least picked two great basketball films to attempt to emulate, but the problem is it just doesn’t have the heart of either of them.

Chris Bauer and Carla Gugino bring solid performances in their supporting roles. It’s these performances that help make the film shine more so than it should have. With Gugino as the concerned and loving matriarch, my problem is that storywise she’s not given the due respect in strength that she pours into the character. With a lesser actor, this character wouldn’t make any sort of an impact.

By stepping back and looking at these performances, there’s one thing that bothered me that I couldn’t quite shake: why should we even care about Anthony’s journey on the court and (potentially) to college? If anything, we see a passive character who seems to just care about basketball and makes reckless decisions. Then when the film gets to the third act, rather than seeing humility, we simply watch Anthony once again make reckless decisions that are driven by his ego. Isn’t this the opposite of what we should be seeing and experiencing in this inspirational tale of an underdog achieving the impossible? But he really wasn’t an underdog to begin with, so our emotional investment in this character is never earned. Perhaps that is my problem with embracing this film.

Bart Freundlich wrote and directed the film. While I already went through my issues with the story, his eye with the camera is something I have a greater appreciation for. I like the grit the film has and I’m curious what he could do with grittier material. There is a lot of potential on display, but it never quite connects. It does have me interested to see what is next from this filmmaker.

Brent Lorentson is a horror writer and film critic based out of Tampa, Florida. With a BA in Digital Film, he co-wrote and co-directed Scavenger Hunt. His short stories have appeared in various horror anthologies. In 2019 his short script Fertile Blood will be a part of the anthology horror film Slumber Party. He is currently working on his first novel A Dark and Secret Place set to be released in late 2019. Favorite Films: Taxi Driver, Fight Club, I Saw the Devil, The Wild Bunch, Dawn of the Dead, A Clockwork Orange, Pulp Fiction, Heathers, The Monster Squad, and High Fidelity.
Tuesday Round Up: August 22, 2017 I Am the Blues