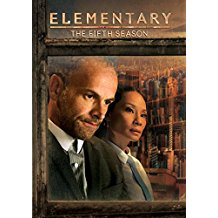 “My name is Sherlock, and I’m an addict.”

Elementary is one of those shows that rather quietly continues to do what it does without drawing a ton of attention, but yet enough fans that the series has been able to reach the 100-episode milestone here in its fifth season. That used to be a little more important than it is today. Years ago a show’s only chance at making money after the original run was through syndication. Today there are less independent stations, and they tend toward the situation comedies more than drama. There are cable networks that once used these shows as their primary material. Remember when TNT might as well have been called The Law & Order Network. But even those times are drying up. Cable networks are churning out more and more of their own scripted shows so that there is less and less space for syndication. Today shows live on in the form of streaming services like Netflix or home video like the latest CBS release of Elementary The Complete 5th Season. 100 episodes continues to be impressive, and it appears there are legs left for more to come.

There are some interesting developments in Season 5. The first is the change of Holmes’ look. He shaves his head. I’m not so sure I like it. It makes him look a little sickly. I guess we’ll see how that plays out by next season. He’s also getting closer to Watson. This season marks a rather dramatic admission from Holmes that the joy of the cases is no longer the solving but rather the solving together. For a guy with this kind of ego, that’s a huge step in personal development. Holmes also deals with the arrival of his former London investigations partner Kitty Winter, who has found a connection between cases they worked and a string of murders.

Watson also has some personal revelations. When a former patient whose life she saved enters the picture, she thinks she can save him again. He was tricked into killing his best friend and wants to get out of the life. He’s a good guy with good intentions, but we’ve all heard about that roadway project to Hell and the materials used. She also must deal with a DEA investigation when her doctor ID is stolen and thousands of illegal prescriptions are written in her name.

The other characters get to shine as well. Bell has new romantic interest, but it comes complete with an angry ex-husband who is trying to make big trouble for the detective. The conflict gets us behind the character’s curtain, and we learn quite a lot about his history. He had an abusive father who abused both him and his mother. This violent guy brings a lot of memories crashing down. It’s really a breakout season for Detective Bell and particularly for actor Jon Michael Hill.

Holmes plays matchmaker for Captain Gregson. He wants him to marry a woman who has a terminal disease but no health insurance. This way she can get the help she needs. Meanwhile actor Aidan Quinn gets to direct an episode of the show this season. The season ends with Holmes experiencing some strange mental issues, and it promises to lead into another unique situation for him in Season 6.

Other cases involve pirate’s treasure, video games, clown murders, poisoned sausage, and snake venom. You get all 24 episodes on six DVD’s. Extras include a feature on the 100th episode celebration, gag reel, feature on the show’s writing, and the usual CBS half-hour season summary. It’s out right now. “I’m happy to give you the rundown.”

Gino Sassani is a member of the Southeastern Film Critic's Association (SEFCA). He is a film and television critic based in Tampa, Florida. He's also the Senior Editor here at Upcomingdiscs. Gino started reviewing films in the early 1990's as a segment of his local television show Focus. He's an award-winning recording artist for Omega Records. Gino is currently working on his 8th album Merchants & Mercenaries. Gino took over Upcomingdiscs Dec 1, 2008. He works out of a home theater he calls The Reel World. Favorite films: The Godfather, The Godfather Part II, The Body Snatcher (Val Lewton film with Karloff and Lugosi, not the pod people film), Unforgiven, Gladiator, The Lion King, Jaws, Son Of Frankenstein, The Good, The Bad And The Ugly, and Monsters, Inc.
Supergirl: The Complete Second Season (Blu-ray) Hickok (UHD Blu-ray) (4K)