This Is Us: Season 1 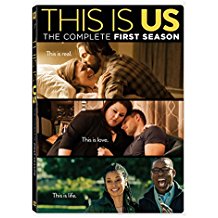 When it comes to shows that simply sneak up on you and manage to suck you in, This Is Us would be a show I never saw coming nor expected to simply fall in love with.  As a show that is on network television, it stands toe to toe with the best that cable has to offer. But what is most surprising is that what sets this show apart from the rest of the pack isn’t a complex antihero or dragons; instead it is as simple as being a show that feels as anything I’ve seen on television in some time.  As the title would suggest This Is Us is simply about a family and the struggles and successes that come day to day, though as many of you can understand and relate, there is nothing simple about life and the constant hurdles that are thrown at us on a day to day basis.  When I would listen to people talk about the show, it seemed every episode managed to make them cry or at least evoke some strong emotion.  I’ll admit I was a bit skeptical about a show being so well made that it could easily prey upon the viewer’s emotions, but after only one episode I was hooked, and I was reaching for the tissues.

The first episode of a television show is generally called a pilot; it’s an episode that is made to introduce the studios and hopefully larger audiences to the show.  One of my favorite pilots was for The X-Files; another great first episode would be for The Walking Dead.  I mention these to hopefully give a little context for the statement I’m about to make, the first episode of This Is Us is perhaps one of the greatest first episodes for a TV show; easily I’d put this in the top five.

Dan Fogelman (Crazy, Stupid, Love) has created a show about the Pearsons, Jack (Milo Ventimiglia) and Rebecca (Mandy Moore) as they go about their journey raising their three kids who all happen to share the same birthday with their father.  We start from Rebecca going into labor to deliver her triplets to jumping ahead decades later to see the siblings as they celebrate turning 36. There is so much more to this episode, the scenes between Gerald McRaney and Ventimiglia, in the roles of perspective father and the doctor that comes in to deliver the babies, are simply heart-wrenching and profound.  As the show kicks its audience in the emotional gut, it sets us up with more as we meet the siblings.  There is Kate (Chrissy Metz) who is struggling with body image issues, Kevin (Justin Hartley) who is a sit-com actor who is sick of being treated as a joke and wants to be taken more seriously, and then we have Randall (Sterling K. Brown), who confronts his father who abandoned him only to be confronted with the news his father is dying.

While these stories intertwine, we shift to the past to see how Jack and Rebecca managed as parents who went from expecting one child to getting the news they are having three.  There is so much that is tackled, from seeing Kate struggling with her weight as a little girl, to seeing the story unfold as to how Randall came to be a part of the Pearson family.

Sure, we’ve seen the family drama on TV, and it’s been done very well, but there is something undeniably special about this first season of This Is Us.  I’ll admit there are three episodes in this show that just completely had me in tears.  Episode 16 is one that especially worked its way beneath my hardened exterior.  But before this episode there are simply so many great characters that come along. Toby, who is Kate’s boyfriend, and William (Ron Cephas Jones), Randall’s biological father, are a pair of my favorite characters in the show who only go to show that there is so much depth to the show and its cast of characters that it has seriously bummed me out that I ran out of episodes to watch.  I want more.

So what is there not to like about this show?  Well, I am worried about just where things will go from here.  There are some major questions that need to be answered, but beyond that I feel the entire kitchen sink of family drama was thrown into Season One and was handled so well that I can’t help but wonder if it’s possible to maintain this level of intense emotional drama without feeling its being forced.

The cast is phenomenal; every actor has plenty of moments to shine over the course of the season.  The writing is just as strong as the performances. It may not have the most quotable dialog, but it has so many moments that will simply cling to your thoughts and emotions and give you reason to want to pick up the phone and mend possible broken relationships with loved ones.  This is the show that I feel network television needed to show they are still a contender with all the options cable has to offer.  This is also the show I feel we all need right now.  With so much tragedy in the world, with so much division as there seems to be, This Is Us is that reminder to what’s most important, that it’s our family and loved ones who are what life is all about through the good and the bad. I love this show and can’t recommend it enough. This is as must-see television as it gets, and it’s something the whole family can enjoy together, which is a rare find these days.

Brent Lorentson is a horror writer and film critic based out of Tampa, Florida. With a BA in Digital Film, he co-wrote and co-directed Scavenger Hunt. His short stories have appeared in various horror anthologies. In 2019 his short script Fertile Blood will be a part of the anthology horror film Slumber Party. He is currently working on his first novel A Dark and Secret Place set to be released in late 2019. Favorite Films: Taxi Driver, Fight Club, I Saw the Devil, The Wild Bunch, Dawn of the Dead, A Clockwork Orange, Pulp Fiction, Heathers, The Monster Squad, and High Fidelity.
Broken Mile Kingsman: The Golden Circle