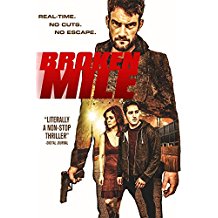 To attempt to film in a single unbroken take is an ambitious move.  Alfred Hitchock did this with his film Rope, and though it’s an impressive achievement, it’s not one of his great films. What works against the film from the start is that it has to entertain its audience from start to finish, and that’s a difficult enough task for films that have well over 1000 different shots.  It’s a bold move, and it is what writer/director and camera operator Justin McConnell delivers us with his feature film Broken Mile.  Just for a moment think about what he’s attempting: 80 minutes of filming hoping his actors deliver their lines and hit their marks, he has to hit his marks with the camera, and then while filming in the real world and not a stage, hope no one jumps in and ruins the shot.  This is far from being a safe film to shoot, but it’s an attempt I can admire, and when I sat down with the film, believe me I was rooting for it.

When Shaun (Francesco Filice) wakes up, he’s face down in a tub of his own vomit.  He’s a drug addict, and when he comes to he discovers his “girlfriend” is dead from what looks like an overdose. We stick with him as he panics and calls the police, but afraid of what can happen to him, he hangs up and calls his ex-girlfriend, Amy (Caleigh Le Grand).  Things get complicated when we discover that the dead girl isn’t Shaun’s girlfriend, but instead the girlfriend of his best friend Kenny (Patrick McFadden).  Sean bolts before Kenny can discover what has happened to his girlfriend, and this is what kicks off the film.

There is a lot of drama at the start of the film; it works.  It fills us with questions to know and understand what is happening as well as pique our interest in the dynamic of the relationship of all these characters. Unfortunately, it doesn’t deliver.

Long car rides are the first of the film’s problems. When Shaun hops in the car to see Amy, we are stuck in the backseat as the driver just rambles on. Sure, it might feel genuine, but genuine doesn’t equal entertaining.  Then we get the long take of Shaun going up the stairs to Amy’s apartment, I have no problem with long walking shots, but we see this same take with a variety of characters multiple times through the film.

The film then shifts gears as we then follow Amy as she is trying to work out what is going on with Shaun and why his friend is after him.  This turns into more walking and more driving.

I understand the ambition of the project and shooting on a micro-budget, but there are points in this film where it goes a step beyond tedious.  Granted the actress can’t help being stuck at red lights, and that is reality, but it sucks the tension out of a film, and it just can’t recover from these moments.

When the cast is interacting and we get to see dialog exchanged as they move through the city, this is where the film shines, and it’s enjoyable, but it never managed to pull me back in.

There’s a really great moment with Amy and Shaun talking on the sidewalk as it starts to rain. I really dug this portion.  The camera work was done well, and the scene felt genuine. I wish there was more of this, because it reflects how close this film got to being something special.

Unfortunately what turned me off from this film is in the final ten minutes when the story is wrapping up. I can appreciate the film is going for realism, but I just kind of stared at the screen watching as the credits passed feeling cheated.  With such a strong and gritty start, the film limps into its credits, and I can’t help but feel disappointed, because we get so much buildup with a payoff that doesn’t hit the mark.

This is an experimental film, and what doesn’t work are some of the hangups that simply come with the territory.  To cut down these driving sequences or long walking scenes would be against what the film was attempting to accomplish, but at the end of the day, the film’s job is to entertain.  The acting works, and the camera work is impressive; these are the elements to appreciate. Film students will appreciate this, and what McConnell set out to do was ambitious and impressive, but it seems he unfortunately fell short this time.

Brent Lorentson is a horror writer and film critic based out of Tampa, Florida. With a BA in Digital Film, he co-wrote and co-directed Scavenger Hunt. His short stories have appeared in various horror anthologies. In 2019 his short script Fertile Blood will be a part of the anthology horror film Slumber Party. He is currently working on his first novel A Dark and Secret Place set to be released in late 2019. Favorite Films: Taxi Driver, Fight Club, I Saw the Devil, The Wild Bunch, Dawn of the Dead, A Clockwork Orange, Pulp Fiction, Heathers, The Monster Squad, and High Fidelity.
The Big Bang Theory: The Complete Tenth Season (Blu-ray) This Is Us: Season 1