“31 Nights Of Terror” Buffy the Vampire Slayer: The Complete Series

Posted in: No Huddle by Brent Lorentson on October 10th, 2017 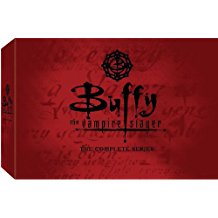 It’s hard to believe it has already been twenty years since Buffy the Vampire Slayer first aired on television. I was still in high school at the time, and when I first heard about the show, I couldn’t have been any less excited. All I could think about was the cheesy movie that had Luke Perry.  At the time horror was having a weird revamping so to speak.  Horror seemed to stop being scary and instead went the direction of trying to be cool and have slick visuals, rather than deliver genuine scary tales. This was a show that at first glance seemed to be everything that annoyed me with what was happening in horror, but when I accidentally stumbled upon an episode and started watching, that was it; after one episode, I was hooked.  For a show that began about teenagers facing the daily horror of high school while also attempting to save the world from the creatures from the night, the show also managed to inject depth by tackling some major social issues that were taboo at the time.

Sunnydale is far from your typical small California town; after all, its high school stands over the Hellmouth, basically the portal to hell that attracts evil of all kinds.  The series kicks off with a fun two-part episode that brings Buffy Summers (Sarah Michelle Gellar) to town after getting kicked out of her old school. Just when she thought she had escaped the vampires and demons from her previous home, she’s left to discover there is no escaping who she is and her responsibility as The Slayer.  The big bad of Season One is The Master, an ancient vampire who of course seeks to bring terror and chaos onto the world, but he isn’t ready to have The Slayer or her friends get in the way. Willow (Alyson Hannigan) and Xander (Nicholas Brendon) are the unlikely duo who are not only her friends but become reluctant sidekicks in the fight against the undead. Just as Buffy was destined to be The Slayer, there is her Watcher, Giles (Anthony Head), who is responsible for training Buffy while also serving as the high school’s librarian. Oh, and of course there is Angel (David Boreanz), the vampire with a soul who will go on to be Buffy’s brooding love interest.

Where Season One seemed more of a season to test the waters, playing the balancing act of being a teen soap opera while also being a monster of the week horror show, Season Two stepped it up a notch.  This was the season most fans know as the season of the Buffy and Angel romance. Personally my favorite thing was the introduction of Spike (James Marsters), who comes to Sunnydale with his psychotic vampire girlfriend Drusilla.  I’m a huge fan of these two and the mischief they cause together.

By the time Season Three rolls around, we are introduced to Faith (Eliza Dushku), a slayer who truly loves what she does, and seeing her with Buffy fighting vampires and other monsters is simply all kinds of fun.  Season Three is personally my favorite season. Discussing why I like it so much may give away too much of the fun, but it’s the season finale of this season that nicely foreshadows what is to happen for the characters and eventually how the series will eventually come to an end.

Season Four works nicely as a transition as we see Buffy go to college, and the show does make some changes by leaving behind some fun series regulars and introducing new characters. For me this may have been the weakest of the seven seasons, but still there is plenty of fun going on where we see Buffy work alongside a secret military group based at her college campus.

At this point in the series you’ve either embraced it and have decided to hang in till the final episode, or you’ve simply given up on it while rolling your eyes trying to make sense of why people love this show. Well, I believe there are two standout episodes that are great examples of the shows range.  “Hush”, where the show is virtually after a group of demons who come into town with the ability to takeaway everyone’s voice. It may not seem impressive, but this episode is filled with clever sequences, and most of all it is simply creepy. The show runners push their cast in unique ways to have them communicate while also telling a fun and thrilling story. Then there is the other infamous episode “Once More With Feeling” where a demon comes to town that causes everyone to burst into song and dance routines. The plot seems silly, but the writers were very aware of what they were doing and seem to be having a blast creating musical numbers that further the plot while also staying true to the tone of the show.

Creator Joss Whedon has become a household name thanks to the success of Buffy and his spin-off series Angel. For many fans it was no surprise when he was tapped to helm the first Avengers film, where many wondered just how anyone could successfully helm such an ensemble film. Well, Buffy is pretty much the definition of what a great ensemble is.  It may have begun as a show about The Slayer, but legions of fans would agree the show is so much more and wouldn’t be the same without the expansive cast of characters. For horror fans still on the fence, another bit of praise I’d like to give the show is the use of makeup and practical effects.  Granted the show aired before CGI was a real cost-effective way to do certain effects, but where the show shines is the use of having characters in costume and makeup; it results in the kind of B-movie schlock that is a blast to watch.  I’m not saying there is no CGI, but when it is used it’s done in a way that stays true to the tone. It’s not going for polished realism, but instead keeps a foot firmly planted in the unique fantasy world that has been created.

20Th Century Fox has released the series as a complete set in celebration of the show’s 20th anniversary.  It’s a 39-disc set on DVD that contains all 144 episodes and is loaded with extras.  Everything from episode commentaries to special interviews with the cast and crew are loaded on the disc along with karaoke music videos, panel discussions, and so much more. Fox had previously released the show in a nice box set, so for those thinking about running out to get this set, when it comes to the discs, the material is the same as what was one each of the previous releases, only this comes with new packaging. What does separate this release from the one before is that it includes issue #1 of the comic that fills in the events that followed if there was to be a Season 8 of the show, and there is an original coloring sheet.

At the end of the day some will call this a double dip by the studio, but with the show continuing to find new audiences as it continues to survive in syndication I feel this is a release for the new fans that have recently discovered the show. I’m as happy as ever to have this set in my collection once again, and it’s a show I’ll have no problem revisiting numerous times over the years to come.

Brent Lorentson is a horror writer and film critic based out of Tampa, Florida. With a BA in Digital Film, he co-wrote and co-directed Scavenger Hunt. His short stories have appeared in various horror anthologies. In 2019 his short script Fertile Blood will be a part of the anthology horror film Slumber Party. He is currently working on his first novel A Dark and Secret Place set to be released in late 2019. Favorite Films: Taxi Driver, Fight Club, I Saw the Devil, The Wild Bunch, Dawn of the Dead, A Clockwork Orange, Pulp Fiction, Heathers, The Monster Squad, and High Fidelity.
Tommy Live at The Royal Albert Hall (Blu-ray) Churchill (Blu-ray)