Posted in: Disc Reviews by Gino Sassani on October 10th, 2017 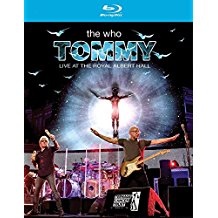 I was first introduced to The Who through the original Tommy album. It was one of my mother’s favorites when I was young, and she had actually written out by hand her interpretation of the story the rock opera appeared to tell. I can’t remember those scribblings, and I’m not even sure if they’re still tucked away in that Decca album I have around here somewhere. But the music always stayed with me. Now, I didn’t ever become a huge fan of the band. I always liked them and collected a couple of their albums over the years. I did play a lot of pinball, however. I fell more in with the likes of Elton John. So you can imagine how excited I was in the summer of 1975 when my favorite musician was cast to play the Pinball Wizard in a movie from the music that had been stuck in my head for years. And while the soundtrack version has been the version I’ve often found stuck in my head, the original album was never far away either. Apparently that’s also the case with Pete Townshend and Roger Daltrey.

The decision to do a live version of Tommy 50 years after the album’s release is tied to a worthy pet project that Daltrey has been running since 2000. He has recognized that teens have been a big part of the band getting its start back in the 1960’s and worked to create Teenage Cancer Trust, which helps teens deal with cancer not only on the medical side but by providing them with unique experiences and activities. The Tommy performance in April of 2017 was the 100th performance from musicians all over the world in support of the cause. One of the parts of this show that I wish we’d seen is only talked about in the Behind the Scenes extra. Kids were provided with instruments and access to the Royal Albert Hall where they were encouraged to write songs inspired by The Who. After the concert they took the stage and got to present them to the band. That must have been a moving event.

The concert itself is pretty solid. You would have thought the band would have done the entire rock opera at some point in 50 years. And there were tours dedicated to the piece, but always anywhere from a couple to a half dozen songs would be cut. I suspect that the loss of Keith Moon accounted for leaving out songs like Uncle Ernie. So this is the only time the band has performed the entire rock opera intact. A screen behind the band depicted some of the story points, but I suspect anyone who was there was intimately familiar with the story even if their mothers hadn’t written it up back in 1968.

Pete proudly proclaims his 73-year age, but it’s not evident at all in the performance here. He still has a great amount of energy, and while he doesn’t “windmill” quite as often as he once did, it doesn’t keep him from throwing enough of them in there to please the older members of the crowd. Of course, they don’t have quite the vocal strength they once did, but what they can still do in their 70’s is nothing short of remarkable. You get faithful reproductions of every note and word. If you have the film in your head, don’t be surprised if you get confused that there’s no Do You Think It’s Alright verse before Cousin Kevin. That threw me, too. But that’s an additional track created for the film. This is the The Who’s original rock opera without Elton John’s additional lyrics to Pinball Wizard.

After the Tommy set, the crowd was treated to a large encore set of classic Who songs: I Can’t Explain, Join Together, I Can See For Miles And Miles, Who Are You, Love, Reign O’er Me, Baba O’Riley and Won’t Get Fooled Again. Take note that they were sure to include all of the CSI songs.

Of course Roger and Pete are the only original members of the band standing on the stage. But it’s a pretty good group of musicians working to reproduce the magic. Pete’s brother Simon Townshend does the additional guitar work. We have Zak Starkey on drums. The youngest member of the band is Jon Button on bass. He looks like a teen compared to these other guys. Loren Gold, John Corey, and Frank Simes contribute on keyboards. Together they’re going to take you back to a time when rock was real and pinball was king.

The concert is presented in its original aspect ratio of 1.78:1. The 1080i image is arrived at with an AVC MPEG-4 codec at an average 35 mbps, and there’s still some nice deep black levels to go along with all of that. But the real star is the wonderful sharpness that lets you see every drop of sweat and the gleam of a guitar pick. Wide shots quickly lose that sharpness. This is where nice contrast takes over that reproduces the tight light show almost as if you were there.

The DTS-HD Master Audio 5.1 was my choice to listen to the concert. There is also an LPCM 2.0 track for the album purists out there. For me the extra rich bass tones are worth it. That “Baroom” on Pinball Wizard makes all the difference in the world. There’s also more dynamic depth to the vocals here. The separation gives me a better feeling of being there. When I saw bands like this live in the 70’s, it wasn’t exactly stereo. Surround Sound didn’t exist, but there’s no question you were surrounded by the sound, including, by the way, the sounds of the crowds that did literally encase you at these concerts. So I’m not sure there’s a purist angle here. You’re not listening to the album. You’re experiencing a concert.

Behind The Scene: (13:19) Most of this is rehearsal footage at Pinewood studios. The band talks about the charity and their own feelings about the 50-year-old music.

What young 1970’s pup, learning to play a guitar for the first time, didn’t, at one time or another, attempt to imitate Pete Townshend’s windmill power chord strum? I count myself in that group. While I was not a very dedicated Who fan, I had an appreciation for the musicianship. There were still songs like Pinball Wizard that I would embrace as if they were my own anthems in those days. It would be hard to deny that The Who is one of the most successful rock bands in history. Part of the original British Invasion of the 1960’s, there are few such acts that are even still around, let alone able to fill the huge stadiums and halls of rock’s yesteryears. Their songs have become anthems, and their antics have become legend. The band wrote the soundtrack for an entire generation, and proudly touted the fact in aptly named song My Generation. Banned from all Holiday Inns at one time for their well-publicized trashing of rooms, they weren’t any easier on their own instruments. Smashing their instruments and amps on stage became a staple, for a while, of the whole Who experience. They’ve inspired a legion of superstars, and now after more than 40 years of rocking, they soldier on. Their influence goes beyond just rock music. All three of the CSI franchise shows sport Who songs for their opening credit sequences. They’ve been lampooned on South Park and The Simpsons. They were once referred to as The Band That Wouldn’t Go Away, and that was more than 30 years ago. And that guy Tommy? “That deaf, dumb and blind kid sure plays a mean pinball.”

Gino Sassani is a member of the Southeastern Film Critic's Association (SEFCA). He is a film and television critic based in Tampa, Florida. He's also the Senior Editor here at Upcomingdiscs. Gino started reviewing films in the early 1990's as a segment of his local television show Focus. He's an award-winning recording artist for Omega Records. Gino is currently working on his 8th album Merchants & Mercenaries. Gino took over Upcomingdiscs Dec 1, 2008. He works out of a home theater he calls The Reel World. Favorite films: The Godfather, The Godfather Part II, The Body Snatcher (Val Lewton film with Karloff and Lugosi, not the pod people film), Unforgiven, Gladiator, The Lion King, Jaws, Son Of Frankenstein, The Good, The Bad And The Ugly, and Monsters, Inc.
Tuesday Round Up: October 10, 2017 “31 Nights Of Terror” Buffy the Vampire Slayer: The Complete Series