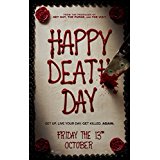 Up front I’ll tell you that the movie Happy Death Day has so many twists and turns that you would think you were on a wild ride at Universal Studios.  The fun but deadly storyline is a cross between Scary Movie and Groundhog Day, and the maze of thrills will have you spooked out until the very end. Or what you think is the end, so don’t get up out of your seat until it’s ALL over. Carrying the perfect movie rating, PG-13, the filmmakers sneak in what most teens are looking for without having to have a parent on hand to watch over them.  It’s has some rude stuff woven into the storyline and even some partial nudity that’s nothing more than a rear-end shot.  The shockers are the cool part, with the ugly killer popping in without notice.  Actually, when you feel the stalker is coming, it’s already there.

Enough of that, as the film actually has a good story and even a moral of sorts.  Tree Gelbman (Jessica Rothe) awakens one morning in the dorm bed of Carter Davis (Israel Broussard).  He brought her back to his room after a wild party at her sorority house, Kappa Pi Alpha. Groggy and wondering why she ended up in his room, she gets all upset.

Leaving his dorm room she walks across campus to her housing unit and gets greeted by her roommate Lori (Ruby Modine). She reminds Tree that she is late for class and hands her a birthday cupcake. It’s the start of a day she will never forget as the clock keeps ticking toward the end of her life. Or maybe not!

The movie has a lot going for it, and Director Christopher Landon (Scouts Guide to the Zombie Apocalypse) has the skills to pull off the “never-ending” mystery.  He does give clues all over the place, but it’s more fun not knowing when the next shoe will drop.  Just when you think you’ve solved the mystery and are about to walk out of the theater, the movie goes to black and then starts up again. It’s a very nice ploy to sit the audience back in their seats, much like an encore at a concert.

The star of the film, Jessica Rothe, lends her talent to the production by creating Tree Glibman.  Tree has to be an aloof, bratty coed sorority sister who despises anyone who doesn’t come up to her standards.  Rothe nails it as if she really had a college life like her character and sets up the audience for a wild and wicked “hate me, love me” time.

Happy Death Day may give you a bit of déjà vu as is plays out a lot like the movie Groundhog Day with the day repeating itself over and over again. But here Tree is solving a mystery that may save her life. (If you haven’t seen Groundhog Day, find it on line or VOD and watch it AFTER you have seen Happy Death Day for a lot of laughs). Happy Death Day also has the creepy feel and shiver of the horror comedy Scary Movie, where a guy shows up out of nowhere wearing a spooky mask. (That movie franchise lasted through five sequels.)

Now the film’s not for everyone, and the PG-13 rating by the MPAA is for violence/terror, crude sexual content, language, some drug material, and partial nudity all involving college kids. The 13-16 year-olds will love the fact that they can see the wild and wacky movie without a parent present.  But be cautious when deciding to allow immature children see the film, as it does have some scenes that are inappropriate for youngsters.

A fun film with a lot of fun twists.

John Delia has been on all sides of the movie business from publicity, writing for publications and on line blogs, script writing, to film making. Writer, critic, film editor he has worked as a film critic on this second go around for 14 years. He earned his Bachelor’s degree at the college of Journalism and Communications at the University of Florida in Gainesville, Florida. John is an active member of the Southeastern Film Critics Association (SEFCA) . Favorite Films: Lord of the Rings/Hobbit trilogies, The Godfather trilogy, the Indiana Jones trilogy (I didn't like the 4th), The Avengers and for TV it's Game of Thrones. As for animation it's a tie between anything Pixar and everything Hayao Miyazaki.
Marshall (2017) “31 Nights Of Terror” Contest: Win Under Wraps