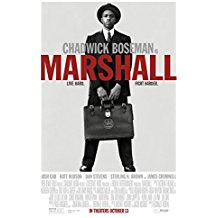 “No one will ever remember that you were here.”

Few names ring as powerfully through the halls of legal history as that of Thurgood Marshall. One of the best legal minds of the 20th century, he became the first African-American to be seated on the United States Supreme Court. He participated in landmark decisions both as a lawyer arguing in front of the highest court in the land and as one of its nine justices writing milestone opinions. But the film Marshall isn’t really about any of that at all. Sure, there’s a postscript that tells us what any reasonably educated person already knew. But the story told here isn’t quite ripped from the pages of an American history textbook. It plays out more as if it were ripped directly from the news headlines… in the 1940’s. And this struggle for justice and equal protection under the law doesn’t happen in the Jim Crowe South. It happens in Bridgeport, Connecticut. It’s absolutely not what most of us might have expected, but it might just be a better movie because of it.

It’s the 1940’s, and Thurgood Marshall (Boseman) is a lawyer for the then-fledgling NAACP. He’s got skill and instinct and quickly becomes the organizations go-to lawyer and ends up traveling to places where racial equality hasn’t made it to the land’s courtrooms. When Joseph Spell (Brown), a black chauffeur, is accused of the brutal rape and attempted murder of his white employer, Eleanor Strubing (Hudson) while her husband is out of town, Marshall is sent to make sure he gets more than competent representation. The first problem is that he is not a member of the Connecticut Bar and needs someone to sponsor him to try the case. That reluctant someone is Sam Friedman (Gad), a lawyer known for being able to manipulate legal technicalities in insurance cases. He’s not a criminal attorney and expects his involvement to end once Marshall is granted his temporary status. But Judge Foster (Cromwell) has other plans. He sees no reason to grant the request, but he “generously” allows Marshall to remain in court as long as he does not speak. He assigns the actual lawyer duties to the inexperienced Friedman. You might expect that many of the judge’s rulings fall against the crusading lawyers.

Marshall is very much a stylish courtroom drama that effectively makes its point through the course of the trial. The film never tries to beat the audience over the head with the moral point it’s making here. The film gives the viewer credit for being able to piece it all together through the unfolding drama. Marshall never even takes itself too seriously and ends up punctuating the point with a much stronger emotional connection through its style. The score is made up of a quite lighthearted bass jazz music that is often whimsical. Often the pairing of Marshall and Friedman feels like a buddy-cop movie out of the 1990’s. There’s a particular love/hate kind of banter going on here that accents the deeper connection without really going there at all. Marshall isn’t portrayed as a flawless historical icon. Actor Chadwick Boseman isn’t afraid to appear arrogant, cocky, and pushy. He often relegates Friedman to a puppet he often gleefully controls to Friedman’s humiliation. Somehow Josh Gad manages to build presence for a character who lacks self confidence and suffers under the barbs of the obviously better-trained legal mind. But it’s the nuances of this relationship that tell the story that isn’t obvious on the surface. The dichotomy makes the pairing both interesting and entertaining, and yet we never really lose sight of the important story that’s playing out here. Friedman’s character is growing and evolving. We get a glimpse into his strict Jewish culture and the consequences the case has on him and his family. He reminds Marshall that he has to live here, while the black lawyer will move on to his next case.  I suspect many were being educated without ever really knowing it was happening. It’s almost as if director Reginald Hudlin was inviting the moviegoers to an entertaining drama while planting subliminal messages the entire time. He did this through a clever script, a perfect cast, and always avoiding the heavy-handed hammer. Oh, the hammer drops. You can hear it in the gasps of the audience at the appropriate moments. They got it. No need to worry about that. But the story is told through characters that are real and flawed human beings themselves.

The film might have that 1990’s buddy-cop feel at times, but it often directly channels Harper Lee’s incredible classic To Kill A Mockingbird, even down to the unusual jazz score. The pacing of the courtroom drama gave me a lot of flashbacks to Gregory Peck’s similar fight for justice that was unwanted, for the most part, by the community in which he lived. It’s hard not to draw the same conclusion when one recalls that film was also about a black man wrongly accused of rape. We get many of the same beats. Marshall might have the actual historic character, but that’s not how he’s treated here. Marshall doesn’t copy the classic film, but it is certainly a descendant of the work.

The supporting cast are all excellent in their roles. Kate Hudson is perfectly stoic in her role as the accuser with a surprisingly sympathetic motive. Cromwell steals a lot of scenes as the obviously biased judge. As I’ve already mentioned, the leads simply nail the roles. The film uses flashbacks during testimony that are not intended to provide reliable narration. Sterling K. Brown is perhaps the unsung performer here. He has to play more aspects of his character than anyone else. He’s totally believable and adds just the right amount of glue that keeps this surprisingly clever film completely intact. “The case is in.”

Gino Sassani is a member of the Southeastern Film Critic's Association (SEFCA). He is a film and television critic based in Tampa, Florida. He's also the Senior Editor here at Upcomingdiscs. Gino started reviewing films in the early 1990's as a segment of his local television show Focus. He's an award-winning recording artist for Omega Records. Gino is currently working on his 8th album Merchants & Mercenaries. Gino took over Upcomingdiscs Dec 1, 2008. He works out of a home theater he calls The Reel World. Favorite films: The Godfather, The Godfather Part II, The Body Snatcher (Val Lewton film with Karloff and Lugosi, not the pod people film), Unforgiven, Gladiator, The Lion King, Jaws, Son Of Frankenstein, The Good, The Bad And The Ugly, and Monsters, Inc.
Peanuts Holiday Collection (UHD Blu-ray) (4K) “31 Days Of Terror” Happy Death Day