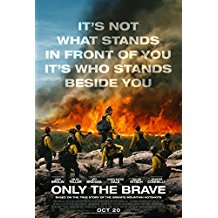 Based on a true story. We see those words preceding a lot of films these days. It’s almost as if we’ve started to chronicle our big moments via the cinema. If a story is tragic enough or portrays outstanding bravery or courage, you can expect it to eventually get a feature film. I can almost predict the big films of 2020 or so just by looking at the headlines in 2017. It’s become a little overdone for my tastes and can often appear exploitive in nature. These films are often devoid of originality. Of course they are. They’re based on something that real life has already written. I’ve seen bumper stickers that say “God is my co-pilot”. I’m waiting for him to get some screenplay credit or a chair in the writer’s room. Of course, he’d be expected to start paying dues to the Writer’s Guild. There’s also the added problem that the audience already knows how the film is going to end. Ron Howard faced the same problem when he directed Apollo 13. He managed to keep us on the edge of our seats anyway. Only the Brave isn’t going to keep you on the edge of your seat. But it will sneak up on you. I knew how it was going to end, but that didn’t stop director Joseph Kosinski from finding a way to blindside me anyway. It’s a trick Houdini would have been proud of. How did he do that? Now, that would be telling.

Eric Marsh (Brolin) is the superintendant of Crew 7 in Prescott, Arizona. They are a team of firefighters, but they aren’t the usual “structure” crew. They fight wildfires. It has been Marsh’s dream that his team become certified as Hot Shots. The term means that they can actually fight these blazing demons from the front lines. Without the certification they are forced to act as support and work the “back-end” of the fire by digging trenches, clearing debris, and monitoring progress. The town is behind him, from the mayor to the fire chief, Duane Steinbrink (Bridges). If they can pull it off, they will become the first municipal fire crew to earn the distinction. They are currently a couple of men short.

Enter Brendan McDonough (Teller). He’s pretty much a loser and an ex-convict. He’s not a particularly bright criminal, as a rather humorous episode in the film soon demonstrates. He’s an addict and pretty much heading toward rock bottom. That is, until he discovers he’s about to be a father with a girl who dumped him months ago. It’s the wake-up call he needed. He applies for one of the openings, and against all common sense, Marsh hires the kid. He can relate to the guy’s attempt to turn his life around. Now if only that decision doesn’t cost the team the chance at becoming Hot Shots. No spoiler here: it doesn’t. Otherwise this would have been a much shorter film. In fact, it’s Marsh who comes the closest to costing them the prize by being a bit pig-headed during the evaluation. Crew 7 becomes the Granite Mountain Hot Shots. That’s when the real work begins for this crew. It will put a strain on their families.

There’s a strong cast here that includes heavy-hitters Josh Brolin and Jeff Bridges, both sons of iconic actors of the past. Jennifer Connelly doesn’t get near enough screen time. She plays Marsh’s wife and provides a nice dichotomy with Brendan. As his family comes closer together, Marsh’s relationship is becoming more strained. It’s a nice touch. Taylor Kitsch and Ben Hardy create two of the more colorful members of the team. I’ve been a little disappointed in Kitsch since his outstanding days on Friday Night Lights, but he’s impressive here.

Only The Brave manages to suck you into the lifestyle and brotherhood of these men. The film allows us to ride along and witness the bonding and growth of the team. There are many wonderful character moments here, highlighted by Brendan’s dedication to his new daughter and winning the trust of his ex-girlfriend. Brendan develops two families: his daughter and her mother, and the brothers of Granite Mountain, who are at first not happy he’s there. It was smart to pick a character and let us experience this film from his eyes. All of the characters are strong, but it’s through Brendan’s eyes we get so close that when things finally “heat” up, the emotional impact is stronger than I ever expected it would be.

There’s plenty of action. The team fight many fires throughout the film. We witness some truly spectacular vistas along with the oppressive terror of some of these grand blazes. The film might hit home just a little too close to those in California who are living through these nightmares in the real world. But back in the reel world of Only The Brave, we sit at a safe enough distance to marvel at the awesome power these blazes conjure. Kosinski keeps us on a roll and distracted enough that when the tragedy hits, it’s like a punch in the stomach that we kind of forgot was coming. Those are hard things to do, and Only The Brave does them well enough to stand above the glut of disaster or true-story films we’ve seen recently. “It’s the most beautiful and terrible thing I’ve ever seen.”

Gino Sassani is a member of the Southeastern Film Critic's Association (SEFCA). He is a film and television critic based in Tampa, Florida. He's also the Senior Editor here at Upcomingdiscs. Gino started reviewing films in the early 1990's as a segment of his local television show Focus. He's an award-winning recording artist for Omega Records. Gino is currently working on his 8th album Merchants & Mercenaries. Gino took over Upcomingdiscs Dec 1, 2008. He works out of a home theater he calls The Reel World. Favorite films: The Godfather, The Godfather Part II, The Body Snatcher (Val Lewton film with Karloff and Lugosi, not the pod people film), Unforgiven, Gladiator, The Lion King, Jaws, Son Of Frankenstein, The Good, The Bad And The Ugly, and Monsters, Inc.
“31 Nights Of Terror” The Snowman “31 Nights Of Terror” Contest: Win Kong: Skull Island In 3D