“31 Nights Of Terror” The Snowman

Posted in: The Reel World by Brent Lorentson on October 20th, 2017 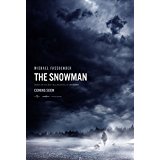 When I first heard about The Snowman, this was a movie that got me excited, that we could possibly have a great thriller to look forward to. At one point Martin Scorsese was attached to direct the film. He eventually backed out of the project, though he is still credited as an executive producer for the film. To step in for the directing duties, Tomas Alfredson got the call, and it’s his involvement that initially got me excited. Back in 2008 Alfredson directed Let the Right One In, which I consider to be one of the greatest horror films to be released in decades. It’s hard for some directors to meet expectations when their first films are such a success. Many may not have heard of Let the Right One In because of it being a foreign film that had a small release in the states, but the remake Let Me In (which he didn’t direct) sure made an impact. Then with the lackluster success of Tinker, Tailor, Soldier, Spy I was beginning to wonder if possibly he had only just gotten lucky and that he perhaps wasn’t the success I’d imagine he would be. Now it isn’t fair to place the success or failure of a film upon one person when there are so many others involved in the making of a film, but when it fails, someone has to be blamed.  I come out saying this because The Snowman isn’t just a bad film; it is an epic disaster like nothing I have seen before.

The film was adapted from a bestselling mystery novel by Jo Nesbo. Personally I’ve never read the book, but from what I understand the book was to be the start of a series, which would mean the film was possibly meant to be a springboard for a franchise.  There is no possibility for this to happen, though thankfully we’re in a time where Hollywood has enjoyed rebooting films that don’t need the reboot treatment. Perhaps this story can be given a second chance to succeed. Alfredson has come out and publically announced that perhaps 15% of the script was never even shot due to time and budget constraints.  Is he simply trying to cover his own backside? That is most likely the case, but as I watched this jumbled mess I found myself believing him, because there are simply points in the story that make no sense, and you have to imagine the script, while adapting the book had to already cut away story points.

In the opening scene as we watch a young boy being quizzed by his uncle, where his wrong answers result in abuse against the boy’s mother.  Things only get worse when the mother attempts to pursue the uncle along a snowy road where she eventually drives off the road and onto the icy surface of the lake with her son inside the car. The boy manages to escape the car, though his mother is not so lucky, and he watches her sink into the lake.  Just these opening minutes alone felt clunky and didn’t seem to flow well, but it was far from the only technical error.

Skipping many years ahead we meet Harry (Michael Fassbender), a Norwegian detective with a nasty drinking habit.  We’re led to believe at some point in his past he was a great detective and his cases have been studied by many in the field, but honestly, it’s hard to believe any of this.

For some convoluted reason a killer begins to taunt Harry, leaving behind clues in the form of snowmen. The idea of a human head being mounted on the top of a snowman is a bit clever, and in book form I can see how this could be creepy and menacing, but the result in this film is just silly. What I did appreciate is the killer’s weapon of choice to dismember and mangle his victims, but to mention this may give the viewer false hope that there is anything close to what I’d call thrilling or horrifying. Instead it is yawn-inducing tedium.

It’s hard to imagine how this attracted so much talent and the result is so bad. Toby Jones, Chloe Sevigny, and J.K. Simmons attempt to do their best with what they have, but I just wonder at what point they realized signing onto this film was a mistake.  Then there is the audio issue with Val Kilmer.  I understand it’s relatively public about him having throat issues, but the ADR and voice just don’t match up at all and it’s so sloppily done it’s what I’d imagine a film student would turn in as his first Soundtrack Pro assignment, not a professional in the industry.

By the time the film arrives to the final act and the killer is revealed in a fashion that reminded me of a poorly made Murder She Wrote episode, the film still continues a step further and delivers the most unsuspenseful chase in perhaps the history of film. I mean, the overdramatic chase music is there, but when it is matched to the action on screen it managed to make me giggle at the jarring ridiculousness of it all.

Thelma Schoonmaker (she’s basically edited all the Martin Scorsese films for decades now) is credited as an editor on the film alongside Claire Simpson. I can only imagine Schoonmaker was called in to attempt to salvage this mess, and even with all her experience there seemed to be little she could do.

For Alfredson I can imagine this has been a worrisome experience, and hopefully he has some projects lined up and locked down, because this is borderline career-ending buzz.  I’m struggling to find something positive to say about the film, and I just can’t think of anything other than some of the cinematography is absolutely stunning at times with the snow-white landscapes.  I wish this had had a screening with a test audience and some money could have been thrown at the film for reshoots or possibly to just film what never was filmed to begin with.  There is so much talent involved here that the outcome shouldn’t be like this. To put it simple, The Snowman is a puddle of melted goop everyone should steer clear of.

Brent Lorentson is a horror writer and film critic based out of Tampa, Florida. With a BA in Digital Film, he co-wrote and co-directed Scavenger Hunt. His short stories have appeared in various horror anthologies. In 2019 his short script Fertile Blood will be a part of the anthology horror film Slumber Party. He is currently working on his first novel A Dark and Secret Place set to be released in late 2019. Favorite Films: Taxi Driver, Fight Club, I Saw the Devil, The Wild Bunch, Dawn of the Dead, A Clockwork Orange, Pulp Fiction, Heathers, The Monster Squad, and High Fidelity.
The Foreigner Only The Brave